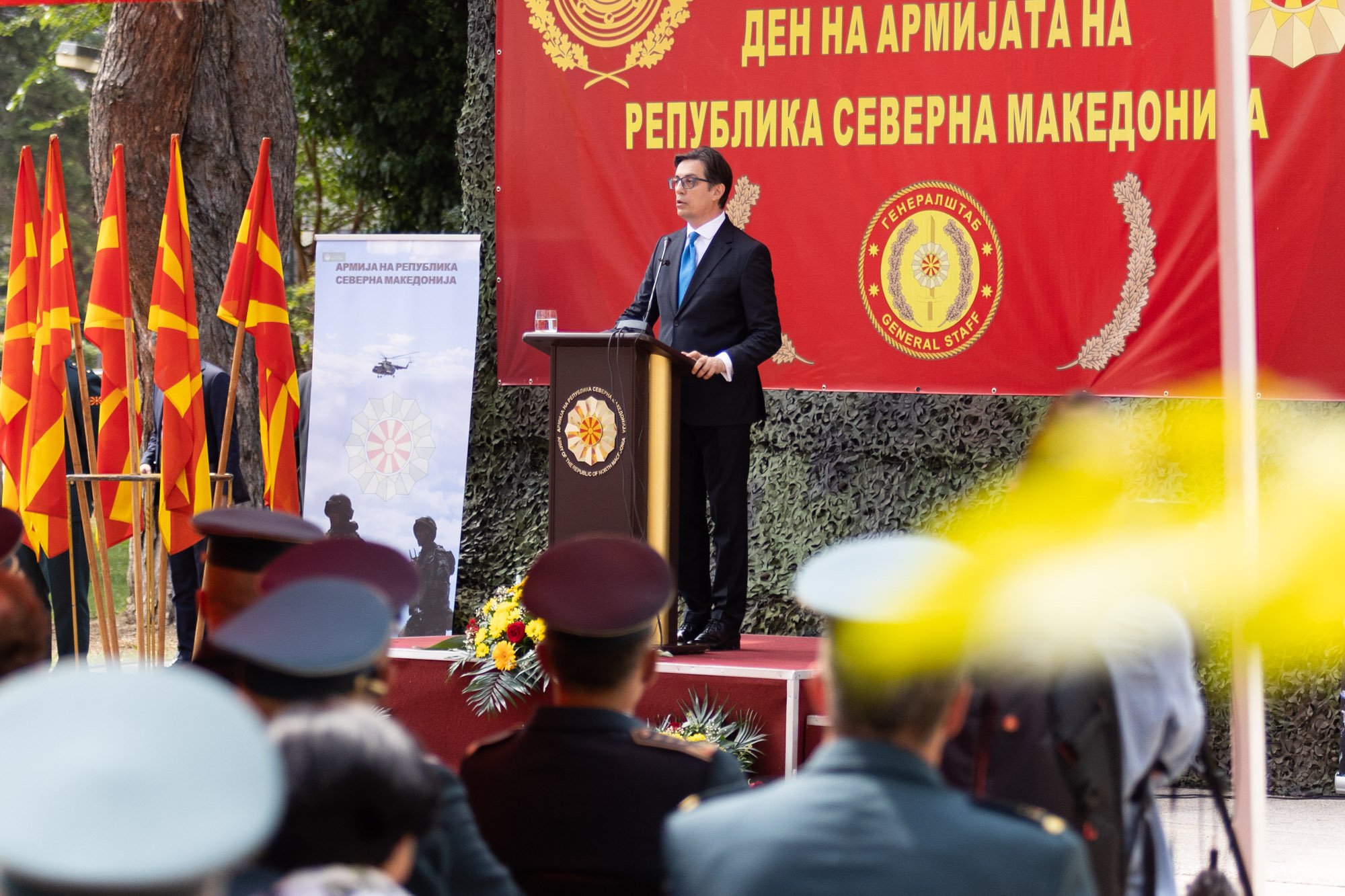 President Pendarovski awarded the Order of Military Merits to the Army of the Republic of North Macedonia in recognition of the professionalism and dedication of its troops, participating in the International Security Assistance Force (ISAF) and in the Resolute Support Mission in Afghanistan.

“The images of horror that we have been seeing in the last days in that country, could not be seen or would not be possible when our troops, working shoulder to shoulder with the other 130,000 peace troops from 50 countries were present there. Therefore, I have decided to decorate all Army troops who have participated in the Afghanistan Mission in the last two decades with the Order of Military Merits. Our troops are indeed deserving of this honour” emphasized President Pendarovski.

Dear troops of the Army of the Republic of North Macedonia,

It gives me great honour to welcome you and to extend my congratulations upon 18 August- the Day of the Army. This year we are honouring the most important national day for the Army, in a year when we celebrate two anniversaries of exceptional importance for our country.

As protectors of the territorial integrity and sovereignty of the Republic of North Macedonia, you, the troops of the Army represent the present-day link between these two important anniversaries and two grand historic endeavours of our citizens and country.

In the last three decades, we faced many internal and external challenges in security, political and geo-political terms. Navigating through the cycles of changes, all legitimately elected leaderships of our country, without any exception, pursued an ever present and strong commitment, defined as of our becoming an independent country. This commitment was defined through the clearly expressed will of the vast majority of Macedonian citizens for fully-fledged integration in the Euro-Atlantic community of democratic nations, integration which brings mutual support and assistance, but also joint actions with our Allies.

Hence, working as part of such a coalition of Allies, founded on shared values, in 2002 we adopted the difficult decision to send our troops in Afghanistan, in pursuance with the United Nations Security Council Resolution No. 1386. Even though at that time we had just put an end to an internal conflict in our country, in August 2002, our Parliament, acting upon the full consensus of all political parties, adopted without a single nay vote, the first Decision for participation of our Army in the ISAF international mission.

In the 19 years following that Decision, more than 3,300 troops of the Army participated in this very complex international mission. We started the first rotation, as a country candidate for NATO membership, completing the last rotation as a Member-State of NATO. Today, when we take stock of this mission, it is clear that we would not have become a member of the North Atlantic Alliance if we had not participated in the Afghanistan mission. For nearly 20 years, Macedonian peace troops have been helping the people of Afghanistan to live in a more stable environment, not losing a single life at that!

Our troops have been decorated with high military and civilian honours by representatives of Member-States of the North-Atlantic Alliance, honouring thus their professionalism, courage, valour, and dedication. The images of horror that we have been seeing in the last days in that country, could not be seen or would not be possible when our troops, working shoulder to shoulder with the other 130,000 peace troops from 50 countries were present there.

Therefore, I have decided to decorate all Army troops who have participated in the Afghanistan Mission in the last two decades with the Order of Military Merits. Our troops are indeed deserving of this honour.

Military partnerships start with clear political decisions, and are maintained by continually improving the combat readiness, through participation in military exercises and international military missions. However, the ties between and among countries are built and strengthened by undertaking concerted efforts to deal with natural disasters and non-military security threats. In the last year, the Artillery Battalion, which is part of the I Infantry Brigade, was very active in all previously mentioned areas. Some of the Battalion troops participated not only in managing the inflow of migrants and in alleviating the consequences of the COVID-19 pandemic, but also participated in fighting the disastrous fires raging in several places in our country.

Though founded on shared values, such as peace, democracy and human rights and freedoms, international military collations also function owing to a common language. For 20 years now, the Foreign Language Centre has been organizing specialized language courses tailored to the needs of the Ministry of Defence and of the Army, thus facilitating our troops’ interoperability with the NATO structures.

Hence, I have adopted decisions to award the Charter of the Republic of North Macedonia to the Artillery Battalion and to the Foreign Language Centre.

Finally, alliances by their nature and structure are not one-sided. Even prior to our becoming a NATO member, we had many friends that were helping us. The best example proving that the general support is very often owed to concrete dedicated individuals is the Military Attaché of the Kingdom of Norway, Lieutenant Colonel Egil Daltveit. In the past three years, thanks to his professional and personal commitment and endeavours, significant donations have been secured for dealing with the COVID-19 pandemic, but also for strengthening the capacities of the Ministry of Defence, of the Military Academy and for general improvement of the combat readiness of the Army. We do recognize, respect and value our friends, one of whom is indeed Lieutenant Colonel Daltveit. Therefore, I have adopted the decision to decorate him with the Charter of the Republic of North Macedonia.

As I have said earlier, we celebrate the Day of the Army in a year of two very important anniversaries, but also at a time when we face two serious challenges – the COVID-19 pandemic and the disastrous fires. As the Supreme Commander of the Army, I should like to offer my heartfelt appreciation to all courageous men and women in uniform, who are actively countering these threats. I would like to reassure you that Macedonian citizens recognize and greatly appreciate your professionalism and the sacrifices you make and that they count on your support, both in times of peace, but also in times of hardship. Hence, on behalf of all our citizens, I would like to thank each and every one of you for all your efforts.

At this juncture, I must emphasize that as other countries in the Region, we are fighting on two fronts and that the COVID-19 pandemic and the fires have brought to light certain systemic deficiencies and inconsistencies, and that we must learn our lesson, as we work to remove such deficiencies. In this context, it is high time that we analyse the situation and develop proposals for designing a more resistant and more efficient system of disaster risk reduction.

In the last several years we have been continually raising the defence budget and we have to continue to invest in this area. This is required in order that we have an Army prepared to participate not only in peace mission or in military exercises, but also an Army that has the capacities to help our citizens at any time, working together with the competent civilian structures.

Dear troops of the Army of the Republic of North Macedonia,

Today we pay our deepest respect to all soldiers and officers that have given their lives so that today we could live in peace. On this Day in your honour, which we all celebrate together, we present our great appreciation to all former generations that have unselfishly given their knowledge, efforts, and patriotism to our Army.

Today we take great pride in your professionalism and the efforts you make for the future even more successful development of our Army. Fully cognizant of your dedication, I am confident of your will, and I know that we have an Army prepared to protect our territorial integrity and sovereignty, and that we have an Army that working as part of the North Atlantic Alliance will always bring us honour and pride.

I congratulate you the Day of the Army!