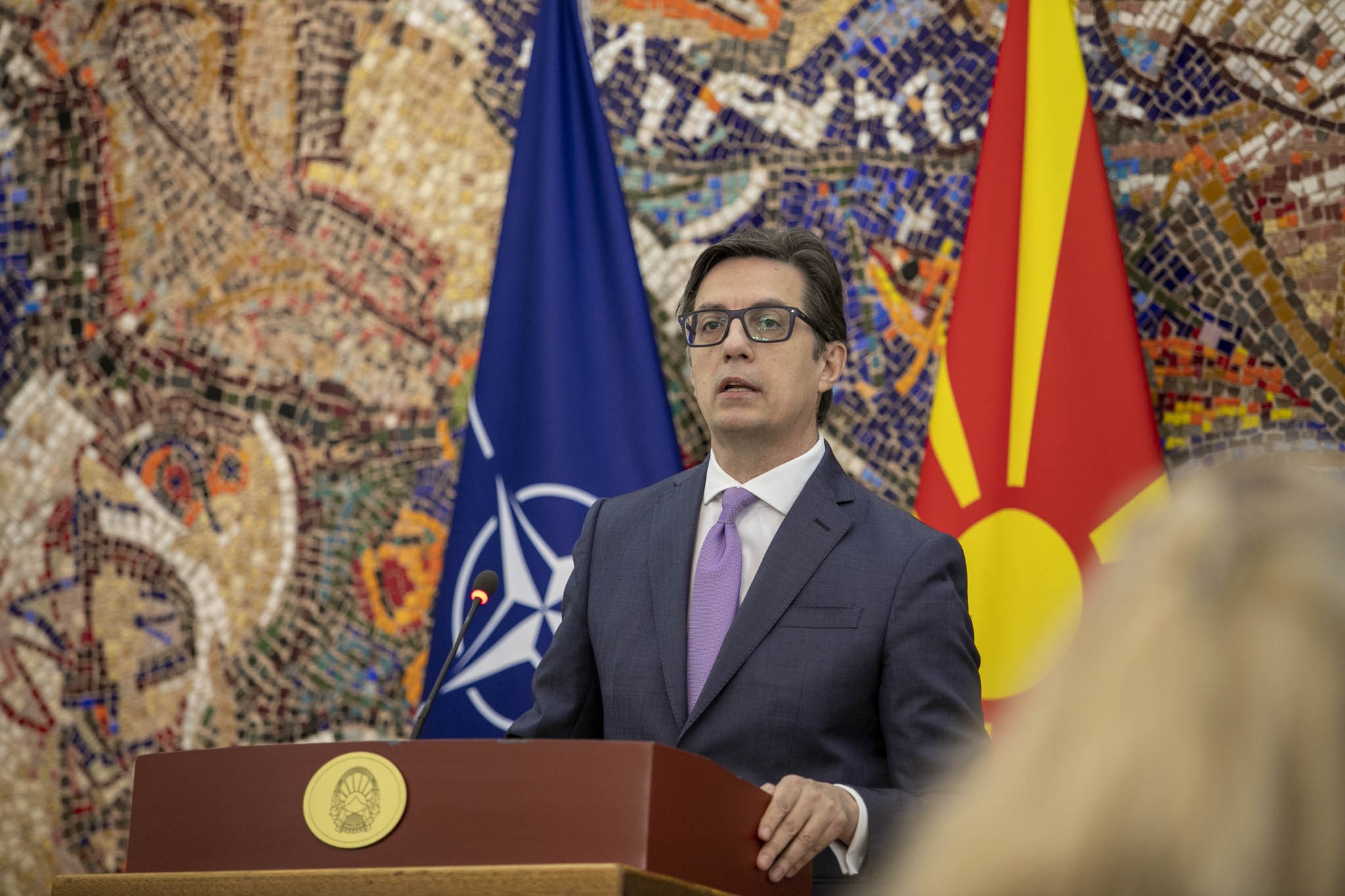 President Stevo Pendarovski addressed today the panel discussion held in the Cabinet of the President on the occasion of the World Press Freedom Day, which was organized in cooperation with the Association of Journalists of Macedonia (AJM) and the Independent Trade Union of Journalists and Media Workers (SSNM).

After the panel discussion, the attendees had the opportunity to see the photo exhibition of female journalists titled “Shoot Your Voice”, which bears the main message of what it is like to be a woman, a journalist and a media worker today. The exhibition is part of the project “Safe Media Workers for Quality Journalism in North Macedonia” organized by AJM and SSNM.

Thank you for the opportunity this year to jointly celebrate this extremely important day for democracy – World Press Freedom Day. The date is an important reminder of our responsibility for transparent and open institutions and respect for media freedoms, in order to create an environment in which the media will do their job in accordance with the professional principles of journalism, free from political and economic pressures.

The pandemic years and the war in Ukraine have shown us how important the work of the media is to obtain timely, verified and impartial information at a time when we are facing an ocean of misinformation that is detrimental to any democracy. The war once again confirmed to us that, unfortunately, apart from the truth, the first victims in any conflict are the media workers who do their job in peaceful, but also in military and emergency circumstances.

Endangering the safety of media workers is a threat to media freedoms. Intimidation, physical assault, blackmail, cyberbullying, gender-based harassment, discrimination and other forms of harassment prevent media workers from doing their jobs freely.

In this context, I support the proposals for amendments to the Criminal Code initiated by the Association of Journalists and the Journalists’ Union, which propose that attacks on journalists and media workers be treated as crimes that will be prosecuted ex officio with higher penalties. for offenders. By doing so, we will contribute to greater protection of journalists and media workers and to the eradication of the culture of impunity, which, unfortunately, is still supported by some segments of the Macedonian society.

In that sense, I call on the competent institutions to respond in a timely manner and to process the cases related to attacks, intimidation or endangering the safety of media workers and thus to contribute to their systemic protection.

It is encouraging that relevant reports note that the transparency of institutions is enhanced and the number of cases of threats and attacks is reduced. According to the report of the Association of Journalists of Macedonia, compared to 2020, the number of registered threats and attacks on journalists and media workers has decreased dramatically. Namely, in 2021 there were a total of 5 attacks and harsh threats against journalists compared to 14 in 2020. The number of active lawsuits for insult and defamation against a journalist or media in 2021 was 20, which only shows that we still have work to do to not allow the suppression of media freedoms as we had in the past.

The safety of journalists is a common obligation of all of us, but, above all, of state institutions and political factors, otherwise, we do not need it only as a political phrase. All state institutions are obliged to provide unhindered access to all information about their work, so that journalists can provide quality information to citizens. The security and judicial authorities should act promptly and indiscriminately in cases where the safety of journalists is endangered. Here we should take into account the statement contained in the report of the Association of Journalists of Macedonia that despite the reduced number of threats and attacks, journalists and media workers still feel insecure due to the inertia of the prosecution and the judiciary in resolving such cases in the past.

Finally, I would like to congratulate all media workers on the World Press Freedom Day and say that we should work together, of course, each within its competences, and with all the resources and capacities we have at our disposal for promotion of media freedoms. Without it, we will have neither professional journalism, nor pluralism in the media, nor well-informed and media literate citizens who will recognize and suppress disinformation. Without free media, the development of open societies and liberal democracy is not possible.