Address by President Pendarovski, in the Assembly of the Republic of North Macedonia 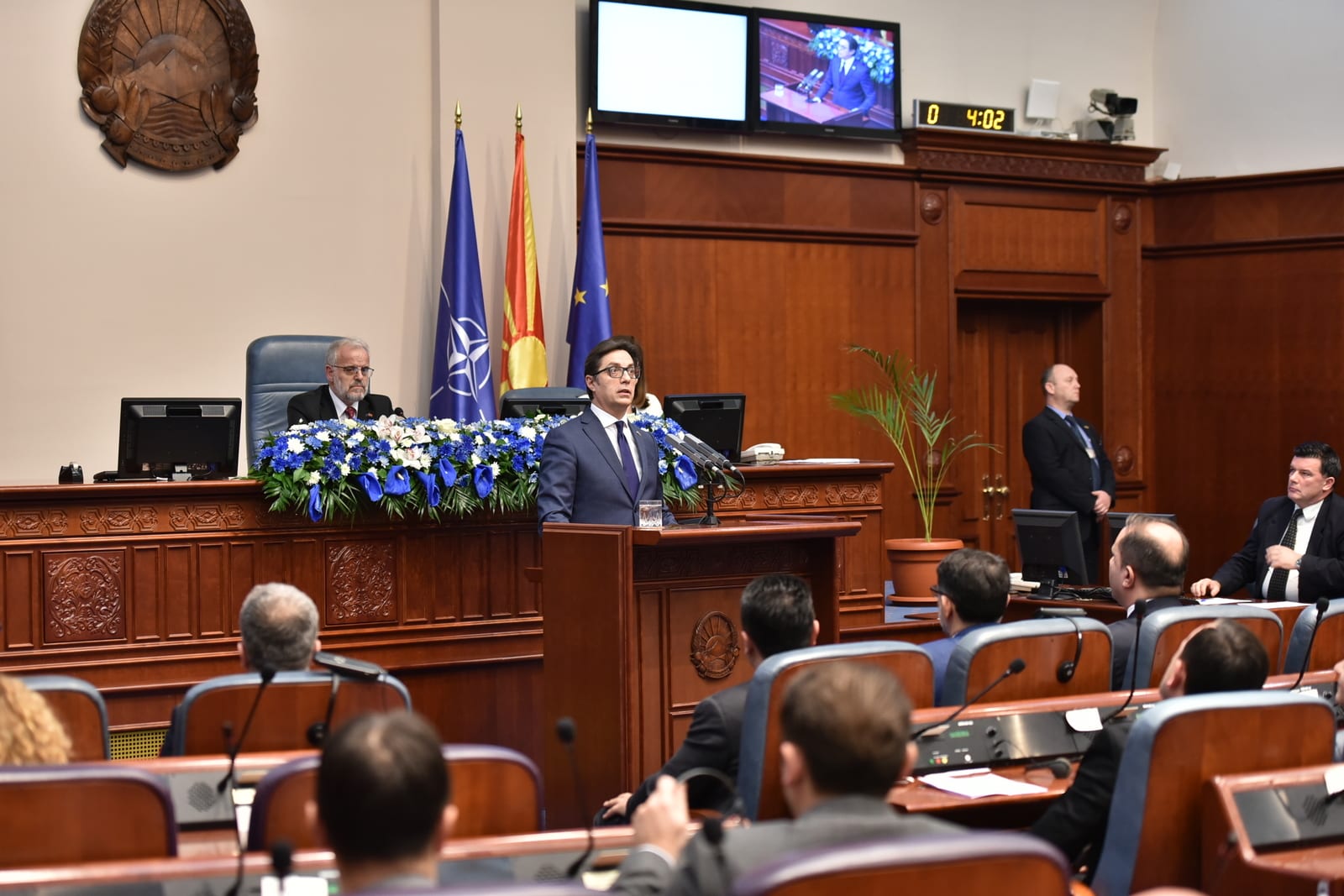 Today, before you is the Draft Law on Ratification of the North Atlantic Treaty. Its ratification by the Parliament launches the final phase of our accession to full-fledged membership in the North Atlantic Alliance, and it was right here, almost 27 years ago, in December 1993, that the first parliamentary constitution of independent, sovereign and democratic Macedonia made the strategic decision on the country’s membership in NATO. Their visionary decision has become our strategic state orientation through the decades and turbulences we went through. The Parliament structure was changing, governments were changing, we went through an armed conflict, we went through a difficult political crisis, but our strategic orientations for NATO and European Union membership remained our most important national priority.

In the past years, unfortunately, there were very few issues on which we have reached full national consensus, which is not only a consensus among political parties and political elites. It is a consensus that unites all citizens, regardless of their differences in nation, religion or language. Since the first decision of the Assembly, large majority of citizens have supported our integration into NATO. Therefore, the obligation and responsibility of our generation of politicians to complete this process has undeniable historical significance.

Joining this Alliance is not simply joining an international organization. It is a specific alliance of states based on mutual political and defense solidarity and shared values. Membership in the world’s most powerful military-political alliance is a privilege, but also a huge responsibility.

Since our accession to the Partnership for Peace in 1995, we have been committed to actively contribute to maintaining international peace and stability, especially in the fight against international terrorism as the greatest security threat in the modern world. We have demonstrated our commitment to this task and our solidarity with NATO allies by participating in numerous Alliance missions in various regions of the world in recent years.

Now that we are formally becoming NATO’s thirtieth member, our responsibility is increasing, reforms are not stopping. As a full member, we will have the responsibility to implement the decisions of the Alliance with an equal voice with the other Allies in their adoption. Internally, it means continuing to improve the standard of living of soldiers and officers by ensuring training for them, modernizing the equipment and strengthening our military potentials to recognize and deal with modern security risks and threats. In that regard, increasing the defense budget to at least 2% of our gross domestic product is an obligation that every serious state must respect.

NATO membership would not have been possible without the profound political changes that have taken place in our country in recent years. The new policy toward our neighbors and the firm commitment to resolving disputes to build good neighborly relations are the foundation of our success in achieving our strategic goals. The compromises we made were neither simple nor easy. But the fact is that the agreement on resolving the name dispute with neighboring Greece and the agreement on good neighborly relations and cooperation with Bulgaria are key decisions that led us to the goal. Their consistent respect and implementation is the only way to deserve the respect of all NATO allies, but also of other entities in the wider international community.

Without exaggeration and without pretense to sound pathetic, I think today’s decision to ratify the North Atlantic Treaty is a major step in completing Macedonian statehood and striking a stamp on our territorial integrity and sovereignty. We, the citizens’ representatives in the legislative and executive branch, have been honored to make this historic decision.

On this occasion, I would also like to express special gratitude to all NATO Secretaries-General, starting with Javier Solana in 1999, when we became a candidate country, through Lord Robertson to Mr. Stoltenberg, who advocated for our membership in the Alliance unconditionally, who were and remain our friends. Acknowledgments to the NATO Liaison Office in Skopje whose expert assistance and support since its establishment 20 years ago has been an important driving force behind reform efforts.

It is now up to all of us, the citizens of the thirtieth member of the Alliance, to put into effect the efforts made over the past decades to prove that we are worthy of this success, and to show the world that when we believe in the same values there are no differences between small and big countries.