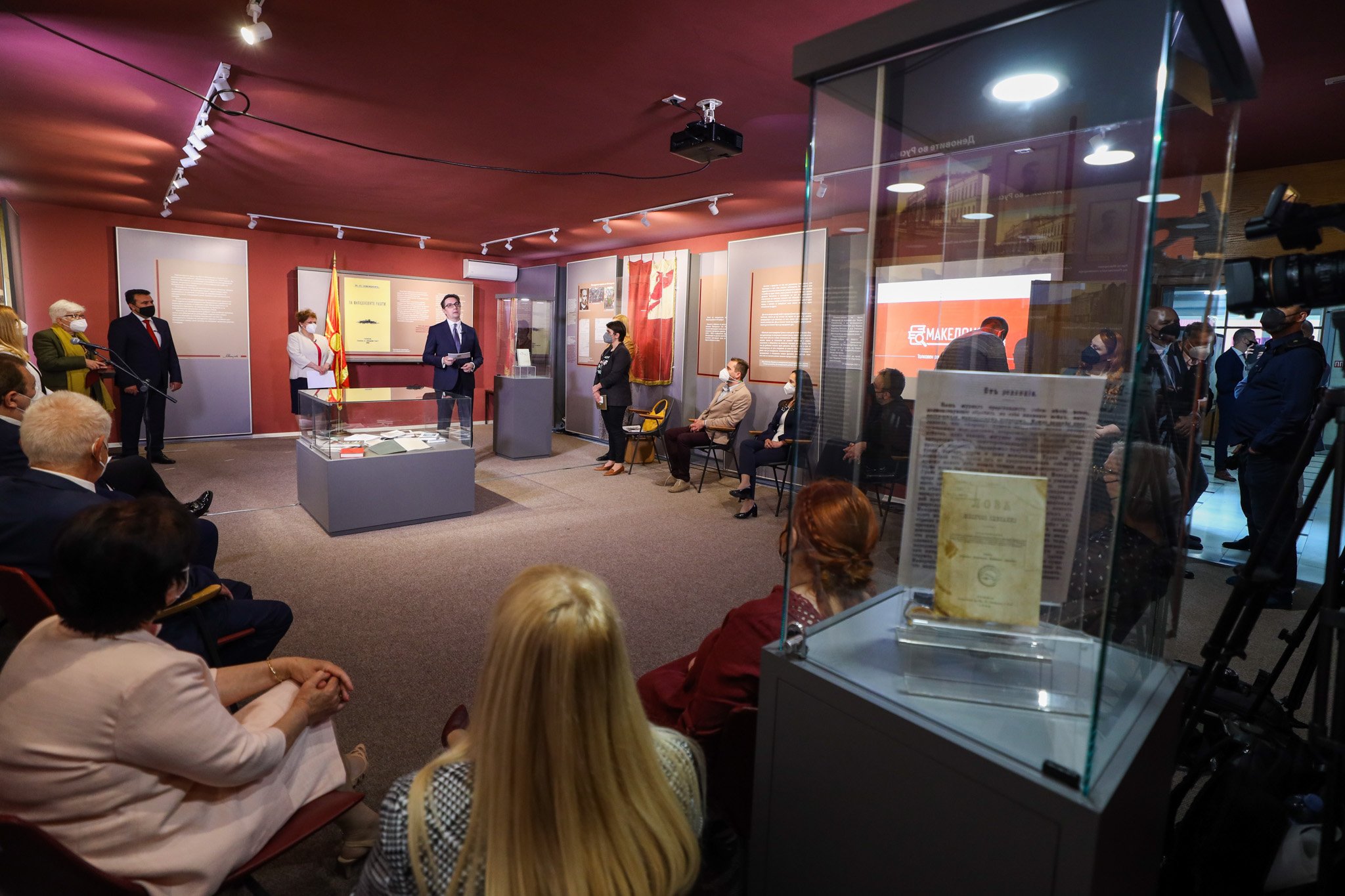 “Investing in the Macedonian language and literature is not a waste of resources, but building our only complete homeland, as part of the European cultural and educational space”, President Pendarovski said at an event held at the Institute for Macedonian Language “Krste Misirkov” – Skopje.

I am honored to greet you as a patron of the celebration of the centenary of the birth of Blaze Koneski.

On May 5, 1945, the first Macedonian daily newspaper “Nova Makedonija” published the decision on the Macedonian Alphabet adopted by the then People’s Government. That decision was prepared by the ASNOM Commission for Alphabet and Spelling, whose member was Blaze Koneski. Although it is only one of a series of important historical dates for the development and codification of our literary language, exactly May 5, 2019, at the proposal of the Macedonian Language Council, was declared by the Government as Macedonian Language Day.

Almost half a century later, on November 17, 1993, the last text of Blaze Koneski was published again in “Nova Makedonija”. In that short article published shortly before his death, Koneski posed the dilemma that bothered him his whole life: is it worth writing in the language of a small nation, which was often denied? He testified that very often his colleagues from abroad advised him to invest his talent in one of the so-called big, world languages, instead of wasting it in a “small” language such as Macedonian.

Koneski replied that abandoning the creation in Macedonian language would be for him an intimate defeat and betrayal of his generation, of his peers carried away by the Macedonian national idea. And, we can add today, if that happens, it will be a defeat not only of his, but of all previous and all future generations of Macedonians.

Koneski was aware that the Macedonian language and Macedonian literacy have their own long continuity. The process that began in the folk dialects by revivalists in the 19th century, culminated with Krste Petkov Misirkov who, in the words of Koneski, “at the beginning of the 20th century made a complete and thoughtful project for codification of our literary language”.

For this continuity speaks the fact that the Macedonian orthography in 1945 and the decisions of the ASNOM Commission coincided with Misirkov’s proposal. Koneski testifies that in 1945 the question of the basis of the Macedonian literary language was not discussed at all, because it had long since been absolved. Of course, language is a living matter and like all other Balkan languages, Macedonian has evolved, adapted, received influences, but it also influenced other, and these are facts that are unequivocally verified by the world linguistic science.

In one of his poems, Koneski compares the continuity of Macedonian language with the handshake between generations, between educators, revivalists and pre-war poets.

That intergenerational handshake is at the same time an act of passing on the heritage. We recently said goodbye to Professor Trajko Stamatovski, one of the last of the generation that together with Koneski, Vidoeski, Korubin, Kepeski, Jashar Nasteva, Ugrinova Skalovska and many other linguists, Slavists, writers, poets, translators and folklorists turned the world’s attention to the European and world linguistic and literary public towards the Macedonian language. That generation is credited that Macedonian has become the language of education, science, art, not only in our country, but also in many universities in Europe and the world. That generation built the most important academic institutions, starting from the Faculty of Philology, through the Macedonian Academy of Sciences and Arts, to the institutes of Macedonian language, Macedonian literature and folklore. Koneski’s generation introduced the Macedonian language and its dialects into the All-Slavic and European linguistic atlas. That cosmopolitan generation crossed the meridians and spread the network of Macedonians around the world. Those top intellectuals also launched the Struga Poetry Evenings in memory of the 100th anniversary of the publication of the Collection of Miladinovci. That creative generation left us an invaluable wealth.

Although there is a relatively small number of speakers, the Macedonian language must not be subject to market logic. It is the inner foundation of each of us, a presumption for our existence as Macedonians and we must treat it as such. Because investing in the Macedonian language and literature is not a waste of resources, but building our only complete homeland, as part of the European cultural and educational space.

Congratulations on the Macedonian Language Day!