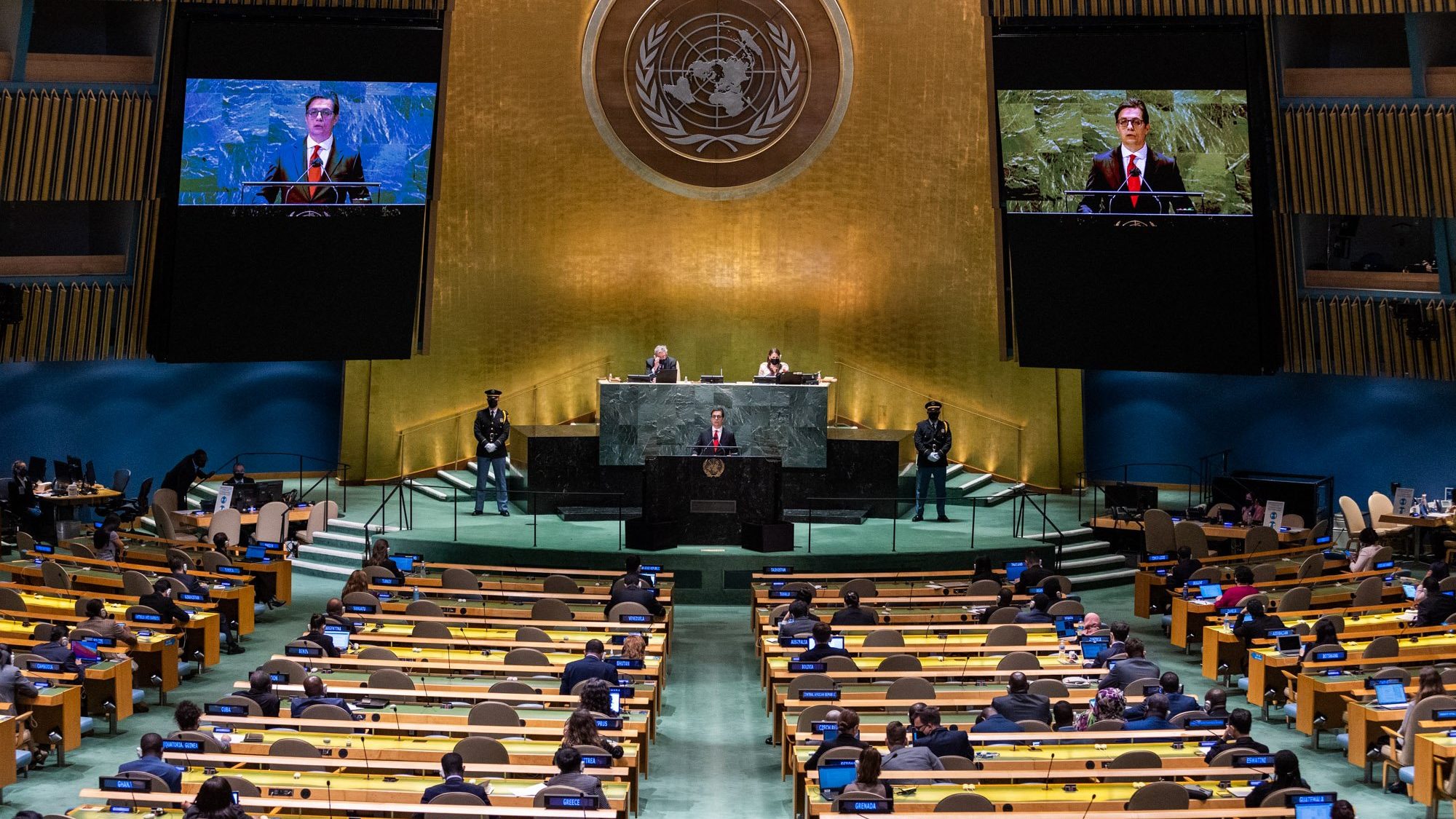 The text of President Pendarovski’s address is below.

I am especially honored and privileged to address this eminent gathering for the first time on behalf of the Republic of North Macedonia. The very fact that most of the leaders are here today, instead of addressing this Assembly via video messages, speaks that the beginning of the end of the pandemic is in sight.

For the past almost two years, there has been almost no country that has not been severely affected by COVID-19. Faced with an unprecedented plight, humanity came together and mobilized all its capacity in order to mitigate the consequences of the pandemic and to prepare for the post-COVID era.

Despite the disparities between the most developed countries and all the rest that came to the surface again, we witnessed a series of great exemplary cases of solidarity and humanness all around the world. Although there is still a long way to go, we can finally see a light at the end of the tunnel and re-focus towards the future. Hence, we need to support new ideas and initiatives, such as the G7 initiative Build Back Better World, an infrastructure partnership aimed at assisting the developing world, strongly affected by COVID-19.

The pandemic, like any other huge scourge in human history is a lesson that must be learned. Not only COVID-19, but most of the challenges humanity is facing do not stop at our national borders or differentiate among nations, religions or ideologies. We can deal with all global challenges – be them security, pandemics or climate change – only with more empathy, cooperation and solidarity.

The reality today is that our world is far from being a safe place to live in. Conflicts around the world, fresh or frozen, terrorism, hybrid threats continue to intimidate our peace and way of life. They continue to threaten human rights and freedoms, provoking humanitarian catastrophes and waves of refugees. We are particularly worried with the latest development in Afghanistan. We share the concern of many leaders, including UN Secretary General, who warned that the world is facing yet another humanitarian plight and called for helping hands, united efforts and solidarity.

Guided by the sense of moral obligation, as well as solidarity, my country, North Macedonia, immediately announced its readiness to host a considerable number of Afghan refugees, particularly the most vulnerable categories and the people who have worked for United Nations agencies in that country for many years. For hundreds of them safe haven has already been provided and conditions for a dignified life. A baby was born in the local hospital immediately after the first plane with Afghan refugees landed at the Skopje airport, a symbolic sparkle of hope and a proof that life, indeed, prevails! We stand ready to contribute to the efforts of the international community in order to ensure a better life for these people, affected by the military chaos and destruction.

The new development in Afghanistan only accentuated the existing threats of terrorism and violent extremism. We must continue to work together and, with a multidimensional approach, address the root causes of terrorism. We should reinforce our efforts nationally, regionally and under the UN roof in search of solutions and mechanisms to fight this evil.

Multilateralism and the United Nations as its core and universal embodiment should be the driving force for strengthening the instruments and methods in assuring security, democracy, freedom, human rights, sustainable development and prosperity for all. We must reinvigorate the effective and inclusive multilateralism that gives the sense of joint participation in shaping our destiny.

In this regard, I would like to particularly stress the efforts of Secretary-General Guterres to adopt the latest report – “Our Common Agenda”, which reaffirms the core values of the organization and offers concrete proposals for a more effective United Nations, based on inclusive multilateralism.

Moreover, we commend the activities of the Alliance of Multilateralism, initiated by Germany and France, and consider it a useful platform that could give e new impetus to enhanced international cooperation.

In the spirit of multilateralism, the Republic of North Macedonia will continue to fulfill its international obligations and support the work of the United Nations and its specialized agencies in creating and implementing public policies on issues of global importance.

It is well known that every crisis presents also a new opportunity. COVID-19 calls us all to rethink our attitude towards various aspects of living. Public health, education and science ascertained that they deserve much more attention if we intend their development to be systematic, integral and sustainable.

When tackling complex and interdependent problems of the new age, we need stronger and deeper partnership and solidarity. Not only to better cope with their consequences, to restructure economies and secure further developments, but, sometimes, to change the mindset that holds us back and does not bring progress.

However, human dignity should be in the focus of our efforts, both nationally and internationally. Eradication of poverty is only a starting point towards assuring at least the minimum rights and needs for all, while a precondition for that is for the new generations to be brought up in the spirit of more solidarity and less inequality among people.

Responsible, visionary leadership within our own borders and beyond them is a fundamental means in achieving these noble goals. We should not shy away from our own responsibilities, we must learn from our own mistakes and misperceptions, caused sometimes because of our unwillingness to leave the comfort zone and demonstrate more courage and leadership determination. Moreover, it is absolutely necessary to hear and include different views in decision-making.

We should spare no resources and efforts in structural women empowerment, with the ultimate goal of full gender equality across all spectrums of society, be that in entrepreneurship, security, education or foreign policy.

In this context, we must open a debate on democracy that is under threat globally and continue to actively invest in democratic values, suppressing the authoritarian tendencies, high-level corruption and systemic human rights abuses. Therefore, as President of a country that knows what a different system of governance means, from the very beginning I supported President Biden’s idea of convening a Summit for Democracy in December this year.

If we want to maintain the moral superiority of democracy over other models of political governance, we must invest in it, especially among the younger generations. It is important for the youth to learn from our failures, oftentimes motivated by good intentions.

The old truth – that we borrow this Earth from our children practically means opening up space for their contribution, freedom and creativity. The universal education accessible to all, as a foundation for personal development, will prepare our youth to face modern challenges more easily and make the world a more dignified place to live in than it is today.

A broad international consensus is slowly being formed that probably the greatest challenge of our time is climate change that we see happening every day with varying intensity and in different shape. Even though we feel the effects of climate change in our daily lives, and, despite the increased awareness of the necessity to mitigate them, it seems that we, unfortunately, have difficulties in mobilizing our strength against this menace. Horrifying scenes from across the Globe unfold in front of our eyes: the terrifying floods here in New York and in Western Europe, the series of deadly fires in South Eastern Europe and the Mediterranean that resulted in loss of lives and enormous human suffering.

Reaffirming our past pledges, North Macedonia remains committed to the Paris Agreement, while at the same time increasing its national contribution incorporated into national laws and policies and regulatory measures. We look forward with great expectation to the upcoming COP26 Summit in Glasgow, considering it a crucial phase in our common efforts to restore the only Home we have – our planet Earth.

Coming back from global to regional or national issues and dilemmas, let me say that the Western Balkans is facing serious challenges in the light of its European integration aspirations. The current impasse in that process frustrates the citizens and constantly diminishing their enthusiasm for positive change.

On the other hand, this state of play opens the door for geopolitical competition but also for different governance models, tightening the space for democratic reforms, vital for the regional prospects of stability and prosperity.

It is high time to reconsider the current phase of the largest continental project since World War II, the idea of a united, free and peaceful Europe. Is the current status of European integration in the region in line with the vision conceived by its Founding Fathers decades ago? Should we care for a stable and prosperous Western Balkans as an important link in the continental and trans-continental stability and security, we must understand that a break-through in the European integration is an urgent need.

As a small country in Southeast Europe,  North Macedonia has proved its ability, together with Greece, under the mediation of the United Nations, to resolve even complex issues, as the so called “name issue”’, thus contributing to additional stability in the region.  The effects of the Prespa Agreement that is now being implemented in good faith will benefit both our countries and the region as a whole. At the same time, we are ready to engage in constructive dialog with our other neighbor, Bulgaria, to assure full implementation of the Good Neighborliness and Cooperation Treaty. We continue to bolster our internal stability and development, as functioning multi-ethnic society, based on principles of democracy, the rule of law and human rights. We are indeed aware that the best possible contribution we can offer to the wider stability and prosperity lays in the enforcement of all these values, at home for our citizen.

At the end, I would like to stress that the messages we are sending this week from New York should not remain just words. Without concrete decisions today, we will not make the world a better place tomorrow. We have a unique opportunity and responsibility, as a generation of leaders who lead their countries through the greatest challenges since the end of World War II, to take steps towards creating a more peaceful and just world in which faith in humanism, freedom, solidarity and respect for human dignity will be restored.

I thank you for your attention.