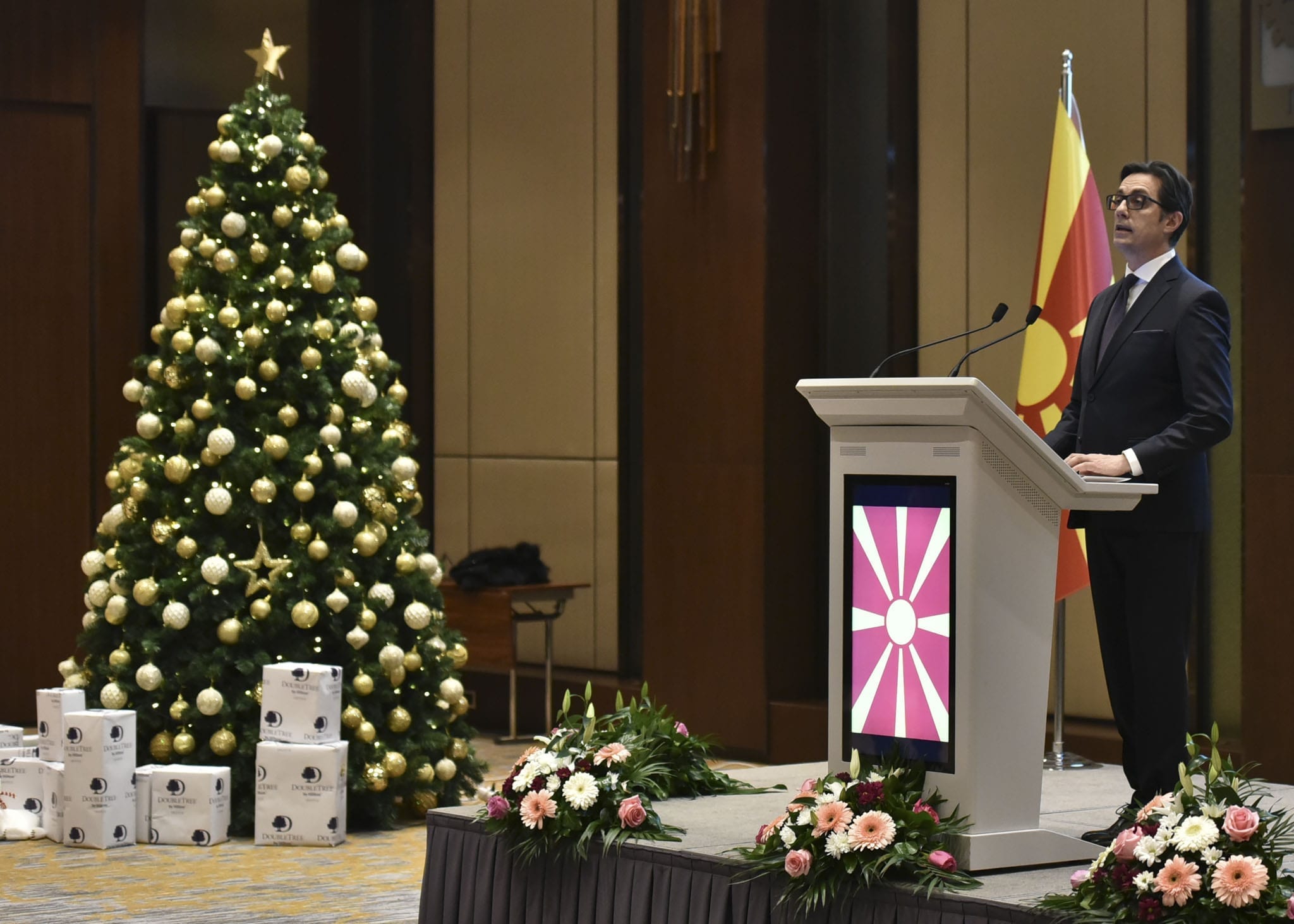 Distinguished Minister of Foreign Affairs of the Republic of North Macedonia,

Respected Madam Ambassador and Dean of the Diplomatic Corps in Skopje,

It is a pleasure for me to welcome you, the members of the diplomatic corps, to the traditional New Year’s reception. In the new 2020, I wish all of you good health and personal happiness and a lot of success to your countries and progress in every field.

I am particularly pleased to greet you because, since May 12th last year, my closest associates and I have established dynamic communication and cooperation with every one of you. That cooperation, I hope we will all agree, has resulted in the implementation of several important visits and international activities.

I would like to emphasize that in the future, as before, my Cabinet remains fully open to even more dynamic cooperation with you in order to deepen our bilateral and multilateral relations on all matters of mutual interest. Transparency and dynamism are among my core principles of work both internally and internationally, as they have been by now and will surely remain to be so.

This year marks several anniversaries since the establishment of diplomatic relations with about 20 countries around the world, as well as 25 years of our membership in the OSCE, the Council of Europe and NATO’s Partnership for Peace. These anniversaries are an excellent opportunity for new initiatives that will best celebrate our joint activities and, of course, our shared successes.

You know me well to know that I am not inclined to use the typical phrases and predict that “this year will be historic”, but, according to many parameters, 2020 has a predisposition to be very important to us as a state, and to the region as well.

The coming few months for us, internally, are a period of organizing and conducting the announced parliamentary elections. On this occasion, I would like to reiterate publicly that I expect the transitional government to organize the elections in a fair and democratic atmosphere, and I expect the parties to behave responsibly, as befits an organized democratic state, a NATO member and a future member of the European Union. Moreover, I expect the government to be formed immediately after the elections and, in this regard, I stand ready to contribute with a consistent respect for the constitutional provisions in handing over the mandate. Interest of all citizens of this country, regardless of which political option they support, is that the reform and integration processes continue without interruption. Regardless of who wins, I expect the implementation of the necessary reforms to continue, aimed at realizing the consensual state positions on our strategic goals.

First, these are our two main foreign policy priorities. This year we will become a NATO member, which implies increase of our responsibility to both the citizens and the allies. With our membership, we become part of the Euro-Atlantic community and thus share the privileges and obligations of the membership. As Commander-in-Chief of the Armed Forces, I will advocate that investment in defense reach at least 2% of GDP in the foreseen deadline, so that we can adapt to the rapid geopolitical and security changes and contribute effectively to peace, security and stability in Europe.

This year, the European Union will be chaired by two countries committed to European enlargement to our region – the Republic of Croatia and the Federal Republic of Germany. The enlargement of the European Union to the Western Balkans has never been only an economic, but also a geopolitical and security issue; it has never been just a commercial interest, but a sharing of common values. I am convinced that the Croatian and German Presidencies of the Union will also be an opportunity for us to move forward in the European integration.

Yesterday I had a meeting with the new Enlargement Commissioner, where I had the opportunity to witness firsthand his ambition and commitment to the process. I would also like to emphasize that the messages coming in continuity from the top management of the organization, the President of the Council Michel and the President of the Commission von der Leyen, are unequivocally in the direction of completing the European Union with the countries of our region. Those messages give our citizens and me personally hope and maintain optimism in the society. I wish, as soon as possible, for all EU member states to recognize this crucial moment for bold and concrete steps in this direction. In this context, I expect and appeal for the new negotiation methodology to be adopted by the end of March 2020 at the latest, and in parallel with the adoption of the methodology, the decision to set a date for the start of negotiations with North Macedonia and neighboring Albania to be adopted. We do not need the negotiations as a political trophy, but as an instrument and a process during which we will change and reform to achieve the necessary standards by which European democracies are recognized.

Second, no matter what the outcome of the elections will be, I expect and will strive within my competencies for North Macedonia to continue on the path of good neighborliness. The Prespa Agreement with Greece and the Treaty with Bulgaria provide the possibility to settle difficult issues of the past and offer a significant investment in our shared future as friends. I am convinced that the successful multilateral cooperation in NATO and the European Union will be even more successful with good bilateral cooperation, above all, with the closest, with the neighbors, of course, on the basis of international law and the goodwill of both sides for fair reading and mutual respect of the agreed.

Speaking of good neighborly relations and regional cooperation, I expect the Belgrade-Pristina dialogue to gain new momentum this year, primarily in the interest of both countries and in the interest of the broader regional stability and cooperation. I believe that any solution reached by Belgrade and Pristina respecting the sovereign rights and territorial integrity of all neighboring states will receive our support.

Finally, I would like to refer to my initiative for strategic opening of North Macedonia to non-NATO and non-EU member states. In my annual address I said and on this occasion I will reiterate: now that we are a de facto NATO member, we have no reason to be reserved in the relations with the states that are not part of the Euro-Atlantic area; the dialogue and cooperation with those states should be built on the basis of the legitimate economic interests of our countries, while respecting the political differences on certain issues.

In the course of this year I will pay working and official visits to some of your countries, and I will host several of my colleagues, heads of states of the European continent. Next week I will be on a working visit to Israel to participate in the World Holocaust Forum on the occasion of the 75th anniversary of the liberation of the Nazi Death Camp in Auschwitz. The citizens of my country were part of the anti-fascist coalition in World War II, and, in our history, the victory over fascism and Nazism has enormous significance and is undoubtedly a constituent part of the identity of the modern Republic of North Macedonia.

Not long ago, unfortunately, in our public discourse, isolated comments were disseminated which were interpreted by the members of the Jewish community as anti-Semitic. Freedom of expression is a fundamental human right, but we all must beware of its legitimate limits when one’s comment can hurt the feelings of a nation or religion by drawing wrong historical parallels. A period of campaigning is ahead of us, accompanied of heated pre-election rhetoric. For these reasons, I call for greater vigilance and restraint, because, literally, my people have never in history been associated with any anti-Semitic sentiments and attitudes.

At the end, allow me, once again, to wish to your countries and organizations prosperity and advancement, and, to you personally, much happiness, health and success.

TO A SUCCESSFUL YEAR!