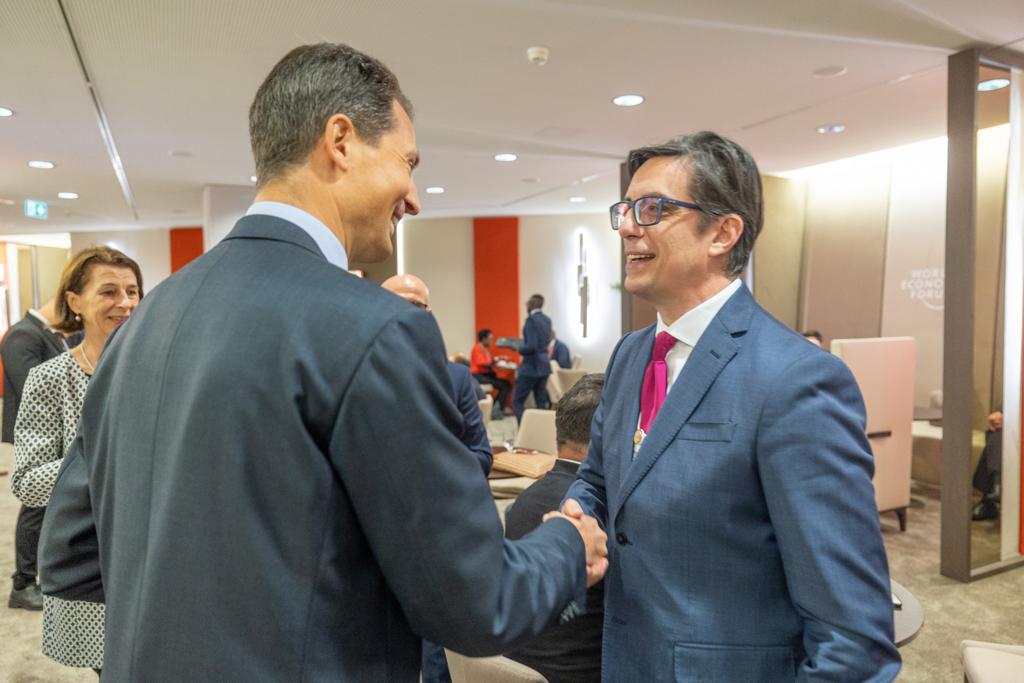 President Stevo Pendarovski, within his participation in the World Economic Forum in Davos, had brief meetings today with the Prime Minister of the Kingdom of Spain, Pedro Sanchez, the Prime Minister of Kosovo, Albin Kurti, Prince Alois of Liechtenstein and the US politician and former US Vice President Gore.

At the meeting with the Spanish Prime Minister, Pedro Sanchez, President Pendarovski thanked Spain for the principled support for the Macedonian European integration and expressed readiness to further encourage and develop relations between the two countries. It was stressed in the talks that the EU enlargement policy is necessary to continue in the interest of stability, security and prosperity of the Western Balkans region.

At the meeting with the Prime Minister of Kosovo, Albin Kurti, the commitments of North Macedonia and Kosovo to deepen bilateral communication and mutual cooperation in all areas of mutual interest were reaffirmed, in order to further strengthen good neighborly relations and friendship and closeness between the citizens of the two countries.

The current developments in Europe and the Western Balkan region were discussed at the meeting with Prince Alois from Liechtenstein. In the context of the measures taken to mitigate and deal with the economic consequences of the Russian aggression, President Pendarovski and Prince Alois also exchanged views on the current developments and the effects on the economies of the European Free Trade Association (EFTA), of which Liechtenstein is a member.

At the meeting with the US politician and former US Vice President, Al Gore, views on the foreign policy of the United States and North Macedonia were exchanged through the prism of the current developments in Europe and the world, as well as the need to intensify the transatlantic relations. President Pendarovski pointed out that the support and assistance of the United States as NATO allies and strategic partners of the country are crucial for the stability, security and strengthening of the democratic processes in the region.