President Stevo Pendarovski, as part of his participation in the World Economic Forum in Davos, addressed today the panel session “In Defense of Europe”, which was also attended by Andrzej Duda, the President of the Republic of Poland, Gitanas Nauseda, the President of the Republic of Lithuania, as well as José Manuel Alvarez Bueno, Minister of Foreign Affairs, EU and Cooperation of Spain and Svetlana Tsikhanouskaya – leader of the Democratic Forces of Belarus.

President Pendarovski said that despite the war in Ukraine, the challenges and the multiplication of the crisis encourage solidarity, not only at European level, but also the transatlantic solidarity, which, according to his assessment, is at a level that has not been in the years before and hope should be drawn from there for the year ahead.

President Pendarovski pointed out that it is necessary to maintain European and transatlantic unity and solidarity even after the end of the war in Ukraine, because if we all turn to national interests, it will be difficult to sustain. The President emphasized that democracies must stick together and fight for the preservation of democratic values because autocratic and dictatorial regimes will prevail on the contrary. The most important thing, according to him, is to maintain complete unity and solidarity after the end of the war in Ukraine.

Asked about the security challenges in the Western Balkans, President Pendarovski pointed out that there are two sensitive points in the region – Republika Srpska and the north in the Republic of Kosovo, where there are attempts to undermine the integrity of these countries. President Pendarovski assessed that a vulnerable point in the European security architecture, aside from Ukraine, is the Western Balkans, and NATO and the EU should pay attention to this.

Following the latest developments in the Macedonian-Bulgarian relations regarding the events and statements of this weekend, President Stevo Pendarovski expressed the following reaction: “I strongly condemn the vandal act of stoning the “Macedonian Cultural Club -... 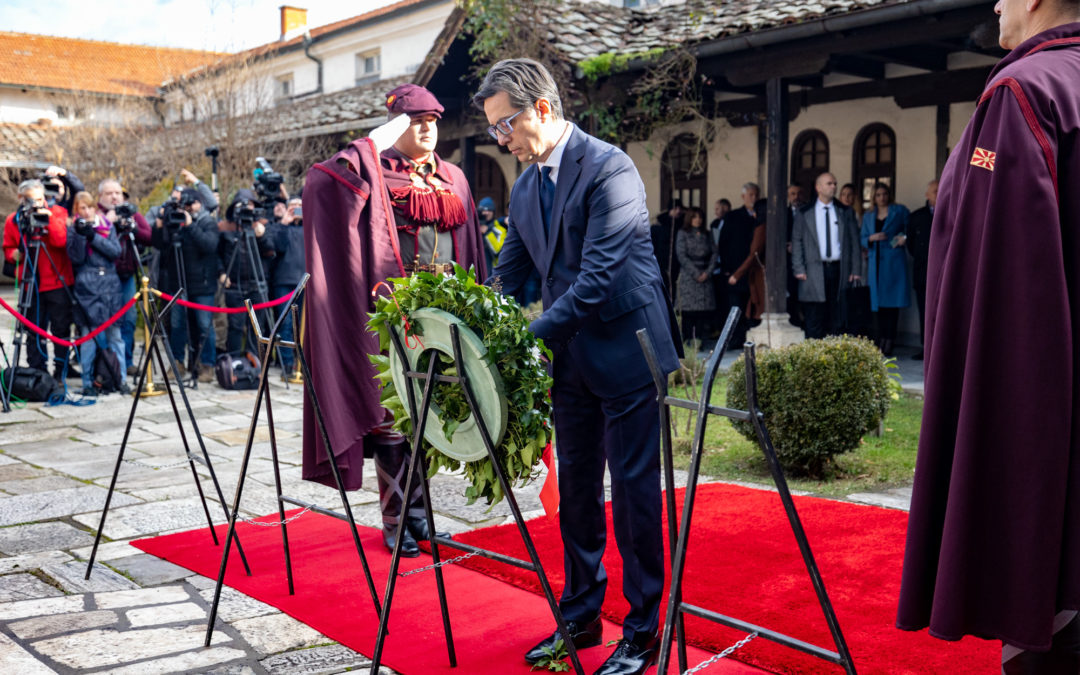 President Stevo Pendarovski attended today the state ceremonial event and the commemoration of the birth of Goce Delchev. In honor of the 151st anniversary of the birth of the great Macedonian revolutionary,... Telephone conversation of President Pendarovski with Sir Stuart Peach, Special Envoy of the United Kingdom to the Western Balkans

President Stevo Pendarovski had a telephone conversation today with Sir Stuart Peach, Special Envoy of the United Kingdom to the Western Balkans. The interlocutors exchanged opinions on the current political processes in the Republic of North Macedonia and in the...