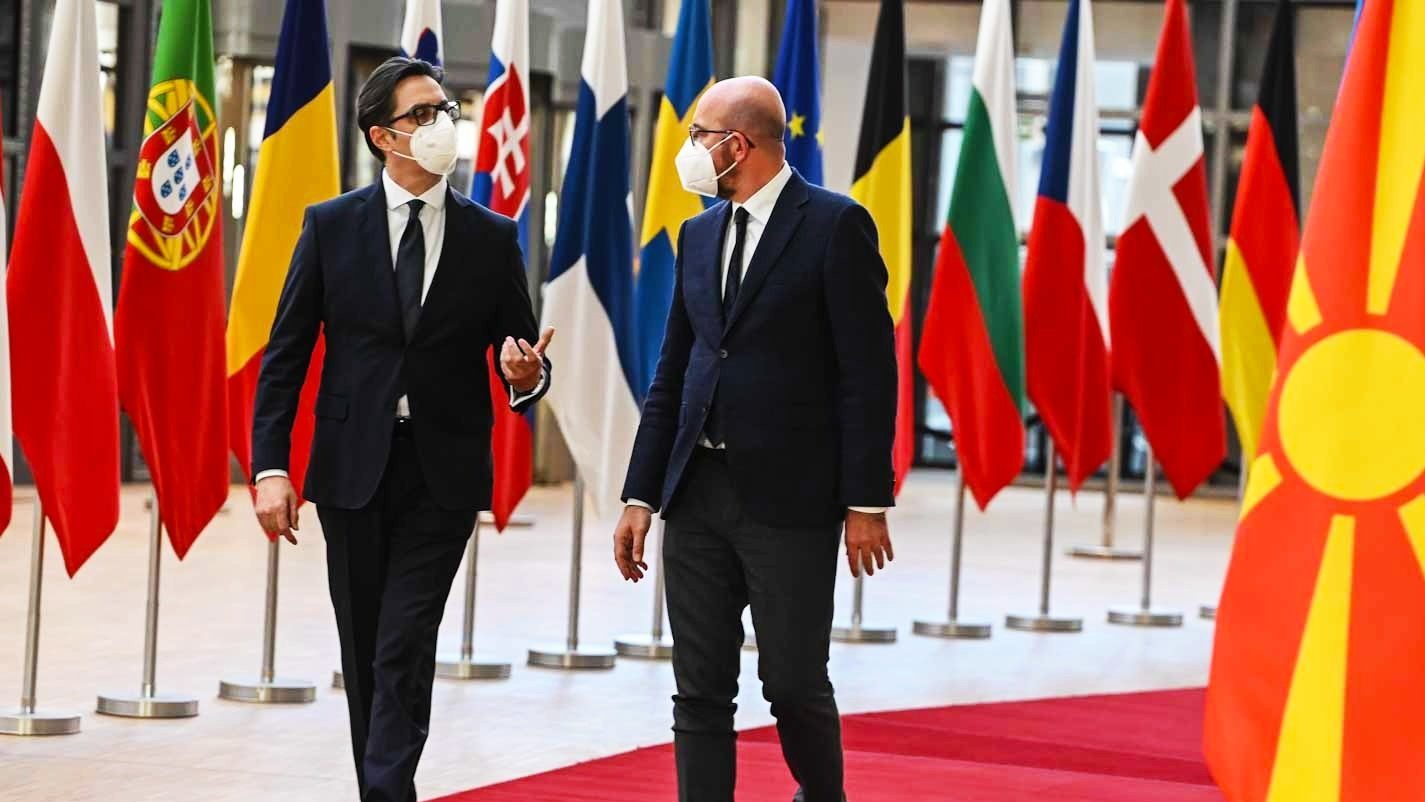 Today, during his working visit to Brussels, President Stevo Pendarovski met with the President of the European Council, Charles Michel.

The meeting focused on the European integration of North Macedonia, the possibility of holding the first intergovernmental conference, the European Union enlargement process, as well as the current challenges in the region, in the context of the Covid-19 pandemic.

President Pendarovski assessed that it is crucial to prevent stagnation in the dynamics of the relations of the Western Balkan countries with the European Union and said that the continuation of the enlargement process is in the interest of the European Union, because in that way the Western Balkan countries are focused on reforms and contribute to European security and stability.

After the meeting, President Pendarovski said that the Republic of North Macedonia remains committed to fulfilling its foreign policy goal – full membership in the EU, as well as to the implementation of reforms in the country.

“This is my second visit to the highest European institutions in the last two years. Today I had a meeting with practically all the holders of the highest positions in the European Union, starting with the President of the European Council, the Enlargement Commissioner, the President of the European Parliament, the Rapporteur of the European Parliament for our country. There was practically a single agenda at the talks with all of them – how to reactivate the dialogue after the pandemic that obviously died, not because of our fault, not because of their fault, of course, but because of this pandemic, which basically reduced the obligations to the necessary minimum. We discussed a few issues with my interlocutors. The first issue was how we are coping and at what stage we are in the immunization against Covid-19. In this regard, I express my exceptional gratitude to the European Solidarity Fund, which from next week will start delivering the Pfizer vaccines which have been agreed through the mediator Austria, as a member state of the European Union and this will be processed on a weekly and monthly basis in the coming two quarters. In a situation where there is practically no European country – a member of the European Union that has fully vaccinated more than 10% of its population, this is really an expression of true solidarity and a clear sign that the European Union counts on the Western Balkans, because this Fund is for all six countries of the Western Balkans, considers the Western Balkans as an integral part of Europe, not only in geographical but also in political, economic and institutional terms. Furthermore, we talked about the ongoing reforms in our country, of course, we had a long discussion on this, about what they expect from us, the main thing they expect is to maintain and possibly step up the reform pace. I reported on the latest developments in that regard, on the processing of several so-called high corruption cases, even of officials from the current political establishment, which was welcomed, as it happens practically for the first time in the history of our country, but they called to double the efforts in the fight against high corruption cases and it is absolutely clear that this is a remark that we have been told for years and that we do not have much time to complete our reformist and pro-European dossier, in that sense. Of course, we spent most of the discussion on the problem we have with Bulgaria, which means the problem that Bulgaria has with us. You know that there is no full consensus on organizing the first intergovernmental conference due to Bulgaria’s opposition. The problem is that, we have all agreed, the elections in Bulgaria are over but without a clear winner and according to the latest information it is quite possible for the Bulgarians to go to new early parliamentary elections, probably in June and if that is the case in the next sixty days there would be only the so-called a technical or official Government without great authorizations. So there will be no clear political legitimacy to get involved into these issues in particular. I said that we are ready, we have a special representative for that issue, we have full coordination between the highest government officials and my Cabinet on that topic, we are ready today to return to the table, to discuss all open issues of course with those fences or so-called red lines that we have highlighted and that we do not expect at all to be on the negotiating table again. So, at this moment, it is necessary, as a precondition to start those talks to re-identify the interlocutor from the Bulgarian side and that, of course, does not depend on us at all, it depends only on the Republic of Bulgaria – what will they decide to do and who will they propose – individual, Government, institution etc, etc … Finally, I think it is important and I emphasized that at the meeting, that on May 10, the European Union has already scheduled, as they call it, a strategic session on the future of the Western Balkans, more precisely on the future of relations between the European Union and the Western Balkans. To this end, their commission and their special directorate have prepared a strategic document that speaks of the need to strengthen activities and relations with the Western Balkans because, unfortunately, in the region 2 countries are negotiating, but that process is not even close to its completion, 2 countries are waiting to start negotiations and it is delayed several times, first we waited for the new methodology, it was adopted, later some other problems arose, and 2 of the 6 countries are not mentioned at all as countries that have the opportunity to start negotiations soon for known reasons. The European Union wants to change that if possible by the end of the year; we can only applaud their efforts because it is clear that the Western Balkans have been in this transition to the European Union for too long without any significant steps forward”, President Pendarovski said.

Earlier, during his visit to Brussels, President Pendarovski met with the President of the European Parliament, David Sassoli, the Vice President of the European Commission and High Representative of the Union for Foreign Affairs and Security Policy, Josep Borrell, and the Commissioner for Neighborhood and Enlargement, Oliver Varhelyi, with the EU Special Representative for the Belgrade-Pristina Dialogue and Other Regional Issues in the Western Balkans, Miroslav Lajcak, as well as with the MEP and Rapporteur for the Republic of North Macedonia, Ilhan Kyuchuyk.