Hanukkah Celebration – Sharing Light in Memory of 7,144 Macedonian Jews, Victims of the Holocaust 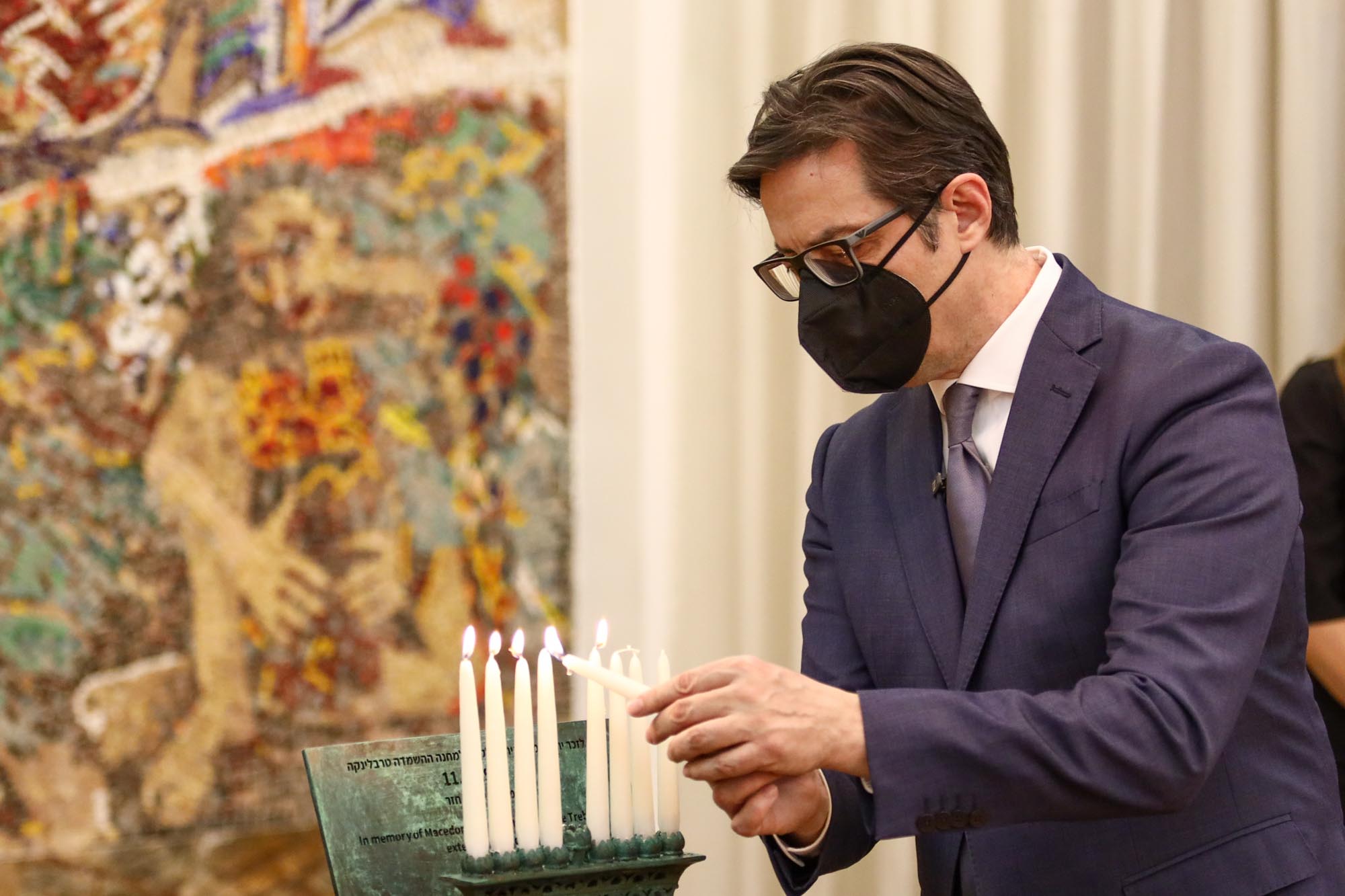 President Stevo Pendarovski, on the occasion of the celebration of the Jewish holiday Hanukkah, together with students from the Special Primary Schools “Idnina” and “Zlatan Sremec” from Skopje, who are part of the project “1000 Menorahs”, lit the eight candles of the menorah, in memory of 7,144 Macedonian Jews, victims of the Holocaust.

“We want to reaffirm our firm belief that the life of every human being is priceless and that ethnic and religious diversity makes the life of the Macedonian society richer”, President Pendarovski said, congratulating Hanukkah.

President Pendarovski lit today the last candle of the Hanukkah, a specially made bronze candlestick by Maty Grunberg, a world-famous Israeli artist born in Skopje during the war.

The students and President Pendarovski, through a joint online platform, joined the global celebration of Hanukkah, where the Director General of the Jewish Community, Isaac Herzog, lit a candle in memory of the Holocaust victims.

“One of the important lessons from Hanukkah is that hope wins everything. So it is with hope in difficult times. When we think we do not have enough, we will be surprised by the solidarity help. Therefore, in difficult economic conditions caused by the COVID-19 pandemic, we are grateful for the support that the State of Israel gives to three schools. This is an investment in our efforts to create a just and inclusive society in which there will be room for everyone”, President Pendarovski added in his message.

The celebration of this holiday of light was attended today by the Honorary Consul of Israel, Gradimir Shumkovski, representatives of the “Acta Non Verba” association, while the British Ambassador, Rachel Galloway, joined via video link.

The aim of the “1000 Menorahs” project is to support schools for children with disabilities and to celebrate the Hanukkah holiday in memory of the Jews from our country, who were deported to the Treblinka camp.

The project, which is supported by the Ministry of Foreign Affairs of Israel and their organization for international cooperation MASHAV, involves three schools from the country that foster education of children with disabilities.

Last Thursday, on the first day of the Hanukkah holiday, President Pendarovski received students from the Special Primary School “Maca Ovcharova” from Veles, with whom they also lit candles at the menorah. In memory of the Macedonian Jews, victims of the Holocaust, 1000 menorahs were lit in several cities in the country.