Interview of the President Pendarovski for CNN: “There is no progress in sight on EU candidacy” 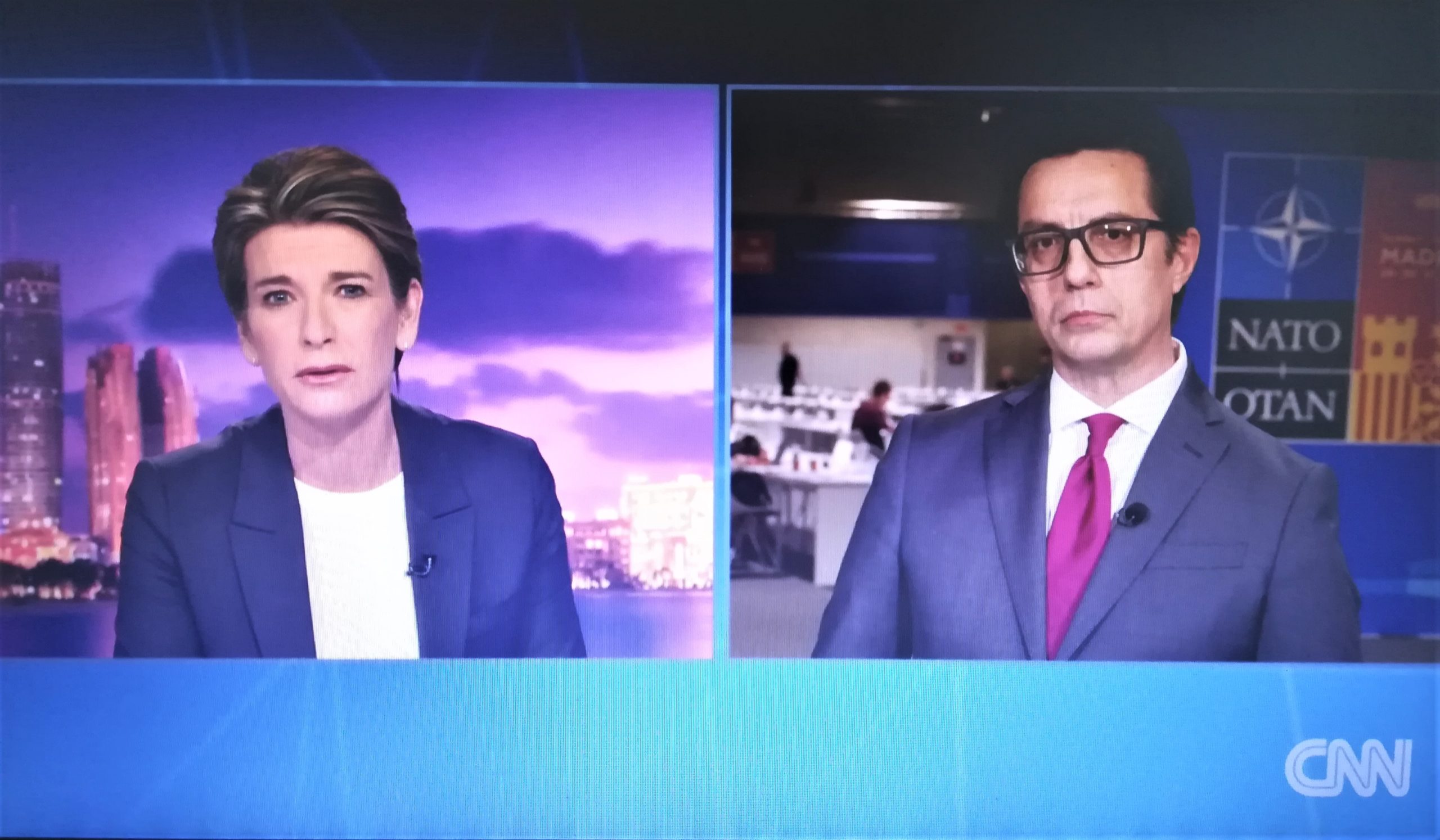 Interview of President Stevo Pendarovski for CNN, before the official start of the NATO Summit in Madrid:

ANDERSON: North Macedonian President Stevo Pendarovski is in Madrid and he joins me now live. It’s good to have you sir. This is a busy summit. It is being described as consequential as it’s been in decades at this summit.

It was announced that NATO will significantly increase troops assigned to its eastern flank with an increase in troops across each Baltic States.

This is after all been described as the biggest overhaul of collective defense and deterrence since the Cold War. What message does that send?

And of course, quite naturally, because of the brutal Russian invasion in Ukraine, then the whole NATO summit will be dictated, in essence are preoccupied with that issue.

First of all, we should tomorrow, I hope tomorrow, by the end of the second session, or in the morning, adopted a new strategic concept, kind of a key guiding document for the foreseeable future, probably by the end of this decade.

It says something about strengthening the eastern flank, as you said of NATO. But it’s speaking about a completely new approach named 360 approaches, meaning that threats and challenges to the European and Euro Atlantic security can come from elsewhere.

So we should be vigilant, and we should assemble all the forces we have. And of course, as soon as possible, all NATO members should reach that threshold and cautious to have – to dedicate at least 2 percent of the GDP for defense.

ANDERSON: Jens Stoltenberg has talked about a seven fold increase in battle ready troops, how concerned are you in North Macedonia about the future and a future threat from Russia?

PENDAROVSKI: To be honest, we are facing the so called hybrid threats coming to us mainly through this political propaganda and fake news phenomenon. In the last four years since we have organized the referendum to enter NATO, you know, we are the only member of the NATO alliance, which has changed its name in order to enter the alliance.

And since that period of time, we are facing an unprecedented level of Russian penetration through these so called hybrid threats. So we are,

let’s say getting accustomed to that kind of penetration by the Russian Federation.

Of course, it’s much easier when you have 29 other allies next to you standing next to you in defending the common cause. But as I said, we are receiving that help we’re receiving that support and I suppose that we will strengthen that cooperation within the alliance against the kinds of threats.

That the same kinds of threats are going not only towards north Macedonia, but Russia is attacking with the same hybrid threats, the whole of the

Western Balkans. And you know that Western Balkan unfortunately, is still not fully integrated into the Euro Atlantic institutional architecture.

ANDERSON: You’ve welcome to Finland and Sweden’s proposed ascension to Turkey to NATO. And Turkey, importantly, has not. What’s your message to President Erdogan, given that you are, of course, the newest member of NATO, you know.

And clearly see that as an extremely important position as a member, given what’s, you know, given what Europe is facing at the moment.

PENDAROVSKI: You know these are obviously two sides of one dispute within the alliance. And we should deal with the concerns of both sides. We have

because it will immensely and additionally strengthen the whole overall potential and capabilities of the NATO allies.

But at the same time, we should not forget about some legitimate political and security concerns of our old ally, the Republic of Turkey. My latest info is that under the auspices of the Secretary General Stoltenberg, and then high representatives of Finland, Sweden and Republic of Turkey, are somehow nearing the end of that process, and trying to find the common ground.

And finally to find the solution, which will allow us today, tomorrow or the day after, to issue our – countries to change the alliance.

ANDERSON: You’ve been listening to President Biden and you and I were talking about the enhancing of deterrence and defensive capabilities ahead of those prepared marks by President Biden.

You as a country have been waiting almost 20 years since first submitting your membership application to the EU. You’re a NATO member, but still, waiting at the opportunity to become a member of the European Union.

Has Ukraine’s fast tracked acceptance or at least candidate status been a bit of a slap in the face for North Macedonia?

PENDAROVSKI: Now Becky, to the contrary, I’ll send a letter to President Zelenskyy a month ago saying that the bid for membership into the European Union by Ukraine has nothing to do by our bid for membership and trying to opening negotiations finally with the same union.

But there are two things in my view, first of all, and then European Union is sending a strong political message of great symbolism to the Ukrainians fighting for their country for their freedom for their choice to be with whomever they want. And in the same time, European Union should not forget very important region at the periphery of the geographical Europe. That is the Western

Balkan region. I can tell you in few sentences that no one but no one of six countries being located in this Western Balkan region is progressing towards the European Union.

The Republic of North Macedonia and the Republic of Albania are effectively blocked by veto by our neighbor, Bulgaria, Bosnia Herzegovina, and Kosovo, completely forgotten.

And here this Montenegro and Serbia are negotiating with the EU for almost 10 years; there is no progress in sight. So this is a crucial region, I saw some of the conclusions we should adopt formally tomorrow, in the first session of the NATO Summit, speaking about the Western Balkans as the strategic region from the standpoint of the whole alliance.

PENDAROVSKI: So in order not to duplicate all of that, let’s put together and let’s streamline all the resources we have for the common cause democracy and freedom.

ANDERSON: The North Macedonian President, I will apologize for having you. Hang on, while we just listened to those prepared remarks by the leaders of Spain and the United States. But I’m very pleased that you were able to hang on, because the discussion that we’ve just been having now I think, is a very important one. So we very much appreciate your time. Good luck at the summit. It is as many are describing it a very consequential couple of days coming up in Madrid.

Thank you, sir, taking a very short break back after this.