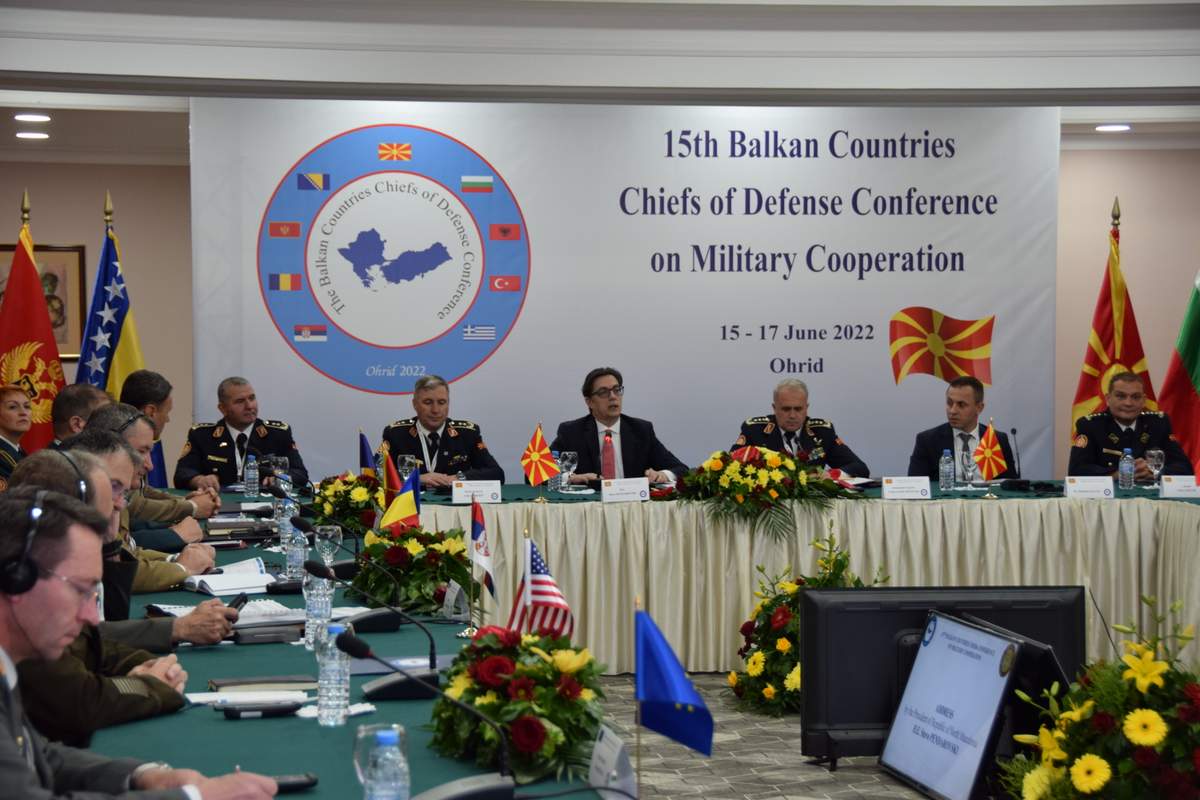 President Stevo Pendarovski addressed today the 15th Conference of the Chiefs of Staff of the Armies of the Balkan countries, which is being held today in Ohrid.

I have the honor to address you at this important annual conference where you, the Chiefs of Staff of the Balkan Armies, will have the opportunity to discuss your previuos and future cooperation, as well as the contemporary challenges and threats we all face as a region that is part of the wider Euro-Atlantic sphere.

11 years ago, in June 2011, here in Ohrid, we hosted a conference of the Balkan Chiefs of General Staff. Since then, many things have changed, my country, which was a long-time aspirant to NATO membership, after 21 years managed to realize its decade-long vision and became a full member, thus setting another stable security pillar in the region. A region that strengthens continental security and, more importantly, contributes to peace and security throughout the Euro-Atlantic area of responsibility.

As a country that has such experience, I firmly believe that NATO membership is the biggest stabilizing factor in the region and that is why I support the aspirations of other countries in the Balkan region that want to become NATO members. NATO enlargement itself cannot be a security threat.

To attain membership in this organization, we were ready to make serious compromises. Here I refer to the Prespa Agreement with Greece which was a dignified and balanced document that offered a rational way out of the bilateral problem. Only with mutual respect between the parties and appropriate level of historical responsibility for the future of the states and the future of the region and of Europe is it possible to reach such agreements with strategic proportions.

The strengthening of the Balkan cooperation and stability will not have the necessary pace and quality without another, very important continental integration process, and that is the European perspectives of the Balkan countries. We have shown and confirmed our political commitment to such an endeavor a long time ago, but it is necessary for the European Union to have an identical position with ours. I do not mean political rhetoric, but concrete activities that will make that goal a reality. The Balkans simply must not be left on the margins of Europe because it leaves room for penetration of third actors who do not offer democratic values.

The strongest example of what I am talking about is the brutal aggression in Ukraine by the Russian Federation, which, if it achieves its goals there, will certainly try to expand to other countries, by military and non-military means, and one of the regions which in that case will surely be Moscow’s target will be the Western Balkans.

You know best that the Russian aggression against Ukraine threatens directly and indirectly Europe itself. The Russian invasion also sparked an energy crisis, high inflation, a food crisis and a slowdown in the post-pandemic recovery of national economies. I am convinced that the Balkans in the European Union will make Europe more stable and secure, as NATO and the EU are the two guarantors for a secure and prosperous future on the continent.

Cooperation and integration are extremely important, and we in the Balkans understand that best. I will soon lead the delegation of the Republic of North Macedonia to the NATO Summit in Madrid where I will support the integration of Sweden and Finland in NATO, because I believe that it will strengthen the security and stability of NATO, Europe, the Balkans, and, thus of my country.

The war in Ukraine reaffirmed the critical importance of the transatlantic relationship and how important it is to preserve and strengthen that relationship. History teaches us that whenever the two sides of the Atlantic understood each other well and had a synchronized performance, Europe and the Balkans were more stable.

The war in Ukraine has shown that in the 21st century there are no local wars, but that all military conflicts are global and their consequences are suffered by billions of people. That is why we support NATO partnerships with other non-European countries that share the same values with us.

The aggression against Ukraine, which you as soldiers understand best, I believe will sober us all, will make us more aware of the complex geopolitical challenges we face and the common response we need to give to this, so far, the biggest challenge since the end of World War II.

We must not allow irrational problems to be an obstacle to the integration of the region. I urge us to be aware that we will have to answer to the generations to come who will ask us what we have done for their better future. NATO’s Open Doors policy should apply to the European Union as well. If we remain indecisive in that sense, we are just opening the door wide to the strengthening of authoritarian options at home, accompanied by hybrid activities and disinformation campaigns from outside, but those options are anti-European and anti-Western.

I sincerely hope that when the time has come, after 9 years, for the Balkan leaders to meet again in our country, maybe again in Ohrid, and another president addresses them, we will no longer talk about the European integration in the Balkans, but about some other, more beautiful works.

I greet you and wish you successful work in the next two days in our Ohrid.