Delegations from the Cabinet of the President were part of the events today marking Ilinden in Krushevo, Smilevo and Skopje.

– the monument of the Smilevo Ilinden fighters and the memorial plaque of the Partisan detachment “Dame Gruev” in Smilevo. Presidents Pendarovski and Pahor lay wreaths at Goce Delchev’s grave in the church of St. Spas

Today, as part of the official visit of the President of the Republic of Slovenia, Borut Pahor, to the Republic of North Macedonia, Presidents Pendarovski and Pahor laid wreaths at the grave of Goce Delchev in the church of St. Spas in Skopje.[gallery... 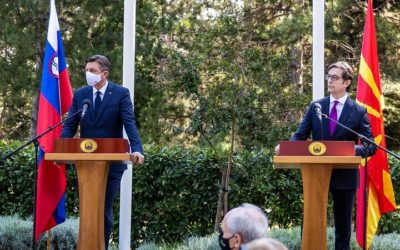