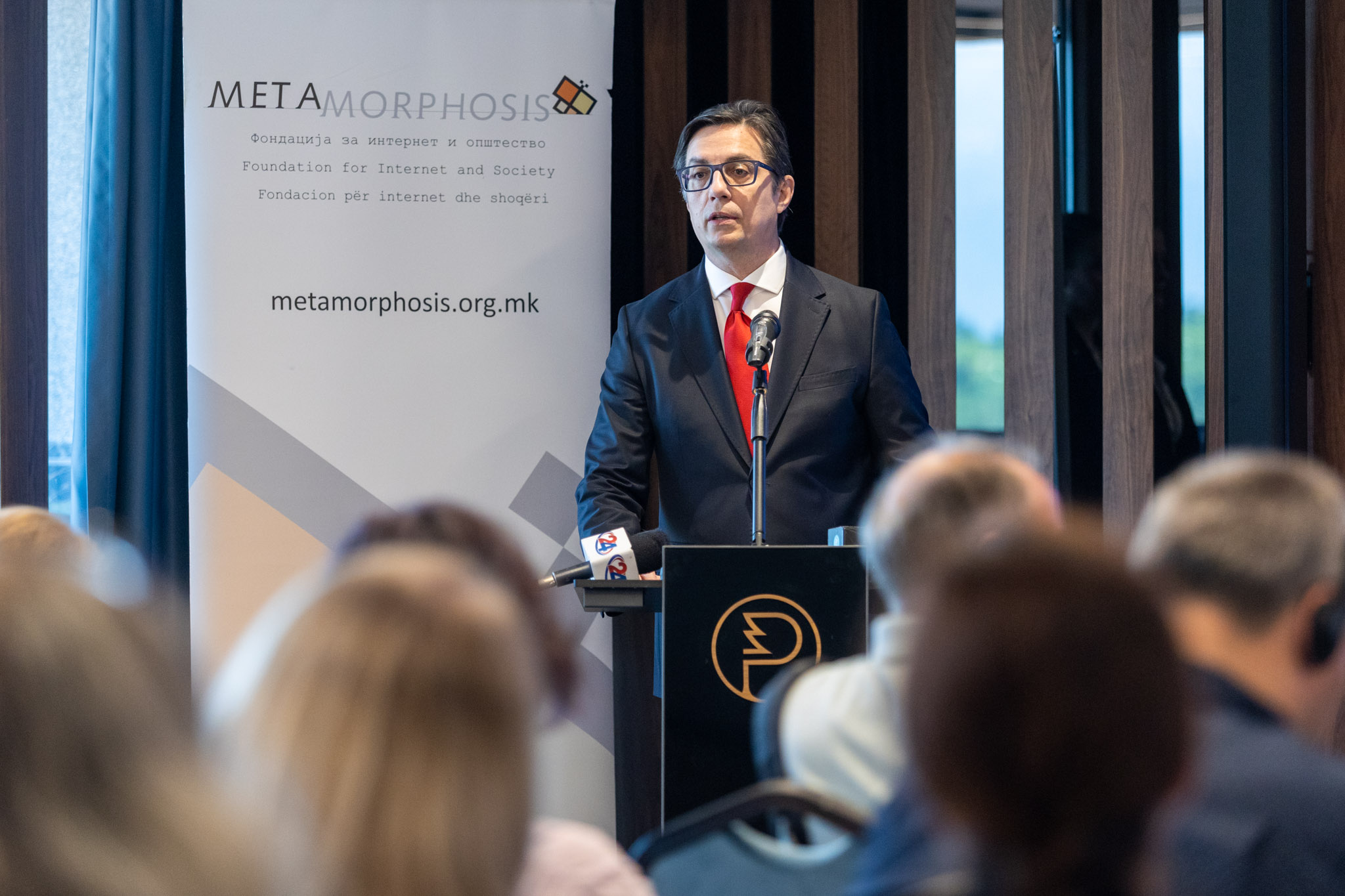 President Stevo Pendarovski addressed today the Conference titled “Dealing with Disinformation in the Republic of North Macedonia”, organized by the Metamorphosis Foundation, aimed at building a multi-sectoral approach to solving this important problem, through joint engagement of state institutions, independent media, civil society organizations, academia and the private sector.

I thank the Metamorphosis Foundation for the invitation to address this event dedicated to an extremely important topic.

Disinformation is nothing new, because it is as old as human history. New is the speed and scope they are spreading with in this digital time, through social networks and media. The COVID-19 pandemic, the Russian invasion of Ukraine, and the economic and energy crisis have shown not only the power of disinformation to spread easily, but also how difficult the struggle to recognize and combat it is.

Globally, there are three drivers of disinformation.

First, the human tendency to trust the information that confirms our worldview. Digital algorithms only amplify this effect because they isolate people through information processes with filtered information according to the interests that they themselves have expressed on digital platforms, thus forming the so-called information bubbles in which it is difficult to penetrate views different from ours. Filtering different and even opposing opinions contributes to the rooting of certain prejudices and values, which increases mistrust and deepens divisions in society.

Second, the spread of disinformation is related to instantaneous global communication and, instinctively, we are attracted by information that causes fear and insecurity.

The third, perhaps the biggest problem with the spread of disinformation, is the growing suspicion in the opinions of science and expert knowledge, which calls into question the existence of objective truth, a trend that is becoming more visible globally.

First, stalled European integration. The nation is tired of waiting. The results of the Metamorphosis research show that most of the Macedonian citizens agree for our country to join the European Union, but not at the cost of compromises with neighboring countries. Secondly, due to stalled integration, we have been dealing with ourselves for years, instead of substantial European reforms. This negatively affects the functionality of the institutions and the rule of law in the country, which creates fertile ground for the spread of disinformation. We see that the price we pay for that is huge. Its most visible and most destructive aspect is the migration.

According to Metamorphosis research, disinformation is dangerous for public health and human life. Here are just a few staggering numbers: over 60% of Macedonian citizens believe that world powers created COVID-19 for economic and political gain. Half of the citizens believe that the world elites created the virus to reduce the number of people on the planet. Over 45% of citizens do not believe in the existence of the virus and believe that the narrative is part of a conspiracy of the world elite to deprive us of our freedom. Due to such disinformation, many of our fellow citizens paid with their health, and 9.300 with their lives.

Disinformation undermines democratic values. Disinformation campaigns polarize public debate, negatively affect political processes, undermine citizens’ trust in institutions and erode social cohesion. We are witnessing research in recent years that the vast majority of young people in North Macedonia favor leaders with a strong hand, i.e. politicians with authoritarian tendencies. This, among other things, is a direct consequence of the support for authoritarian narratives spread through disinformation.

Disinformation is also directed against our Euro-Atlantic orientation. Especially after the beginning of the Russian invasion of Ukraine, North Macedonia has been target of disinformation campaigns aimed at inciting anti-Western sentiment among Macedonian citizens and advocating vague alternatives to European integration. Due to their potential to undermine strategic determinations, disinformation, in a certain context, can contribute to destabilization of the country itself.

The best protection against disinformation campaigns and malignant geopolitical influences is the existence of social, systemic, media, but, above all, personal resistance to disinformation. We need a common approach at national level, with a consensus of key political actors in dealing with disinformation.

We must build a culture of critical thinking, because the critical mind that checks and re-examines information is the greatest defense against disinformation. Therefore, we need to support media literacy initiatives not only for young people, but for all generations, because the pandemic and now the war in Ukraine show that adults are also vulnerable to disinformation.

At the same time, we must not lose sight of the fact that the fight against disinformation is at the same time a fight for the protection of fundamental freedoms of speech, thought, conscience and belief.

Instead of unanimity, we should build a democratic environment in which we will come to the truth through different opinions and views, not through propaganda. And the truth is a basic assumption for trust between people and citizens’ trust in institutions. If there is no trust, there is no progress.