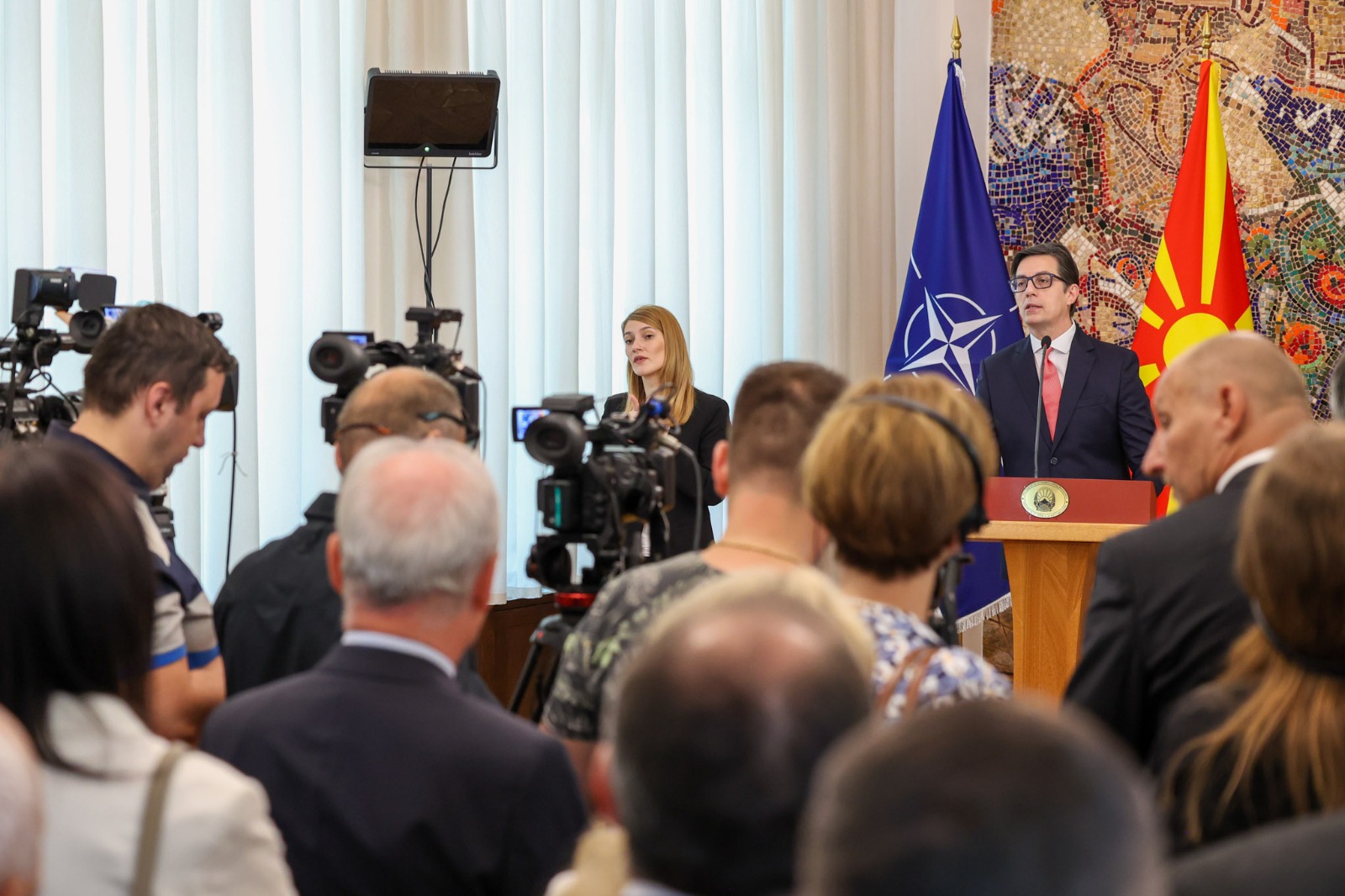 President Stevo Pendarovski addressed today the ceremony for the promotion of the Development Framework MKD2030, which took place in the Cabinet of the President.

The Development Framework MKD2030, prepared at the initiative of President Pendarovski, determines the priority areas in which the Republic of North Macedonia should invest in the medium term, for the country to become a better place to live and work in and get engaged in social activities.

The Development Framework MKD2030 is available at https://mkd2030.mk in Macedonian, Albanian and English.

In order for there to be a real chance for a better future, it is crucial that the key factors in the state and social infrastructure stand behind a single vision for long-term development. That is why I initiated the process for preparation of the Development Framework MKD2030 which, although announced in the second half of 2019, due to the pandemic, I present it to you today, with great pleasure.

I will focus on the problems we have detected, the assumptions we have been guided by and the process we have gone through to determine the priorities necessary for our development by the end of this decade.

The diagnosis of the problems that North Macedonia has been facing for years is worrying – modest economic growth, low level of competitiveness and insufficient involvement in international procurement chains. Corruption, clientelism and shadow economy are present practically since independence. Current development is environmentally unsustainable, socially non-inclusive, regionally unbalanced, energy vulnerable.

Stalled European integration has led to frequent political crises, polarization of society and partisanship of institutions. Modest government investment in research and development has reduced productivity. All this directly affects the GDP growth, wages and living standards of citizens, especially of young people. Of the numerous negative data, I will share only one: in 2020 about 21.8% of the population lived below the poverty line, which is twice as high as the European Union average. Due to the combined effects of the health, energy and economic crisis, that figure is higher today.

Young people are emigrating en masse, citizens have become passive and apolitical, while distrust in institutions is chronic. Our society is deeply divided, and the perception that it is impossible to progress on the basis of our own qualities and abilities is ubiquitous.

Faced with all these serious problems, we asked ourselves the following question: how can we stimulate overall economic and social development by the end of this decade, increase trust in institutions and reduce youth emigration? Or, to put it simply, how can we restore hope to people?

It depends on the accomplishment of this great task whether we will fulfill one of the key goals stated in the preamble of the Constitution, namely, that the state is constituted to “ensure social justice, economic prosperity and progress of personal and common life”. If the state exists because of the citizens, and only because of their interests it should exist, that was exactly the pillar we built this document on.

Why did we put MKD in the title of the framework and why 2030? MKD stands not only because this is a document for the development of our country, but also because it is, above all, our, authentic framework, based on the specific needs and potentials of the Macedonian society, written by the Macedonian mind. Why exactly 2030? Because that year is far enough to make all the moves and interventions necessary for development, but close enough for this generation of politicians not to be able to avoid their responsibility to the citizens for what was missed or done wrong.

MKD2030 is not an office, but a field document. Experts did not write it in isolation in their offices, but created it through extensive consultation in an inclusive and transparent process. Some of our best minds have made their expertise and experience available to us. Over 60 organizations and individuals from civil society organizations, chambers of commerce, academia, media and youth organizations were involved in various stages of the preparation of this strategic document. On this occasion, I would like to publicly thank all those who contributed to have the Development Framework in our hands today.

During the process itself we were faced with numerous challenges. Formulating a development document in the face of simultaneous crises is an extremely difficult task. However, I am convinced that it is good that at such times we have prepared MKD2030, because in that way we have calibrated the development framework taking into account the most negative scenarios and the most pessimistic forecasts. That is why I expect MKD2030 to stand the test of time.

Through the process that lasted for months, four priorities were crystallized, as well as 166 specific recommendations, grouped in 24 areas.

The second priority is environmental protection at the level of the European average and a redefined energy policy. The quality of life and health directly depends on the quality of the environment. In that context, we are talking about quality air, developing an effective waste management and integrated water management system, nature protection and biodiversity. The redefined energy policy will have to be long-term aimed at meeting the internal needs, above all, from renewable energy sources, and, at the same time, resistant to external energy shocks.

The third priority is digitalization, which is at the same time a goal in itself, but also a means to achieve other development priorities. Hence, it is necessary to accelerate the digital transformation and promote the digital economy and education, full digitalization of public services, raising digital literacy and forcing a much stronger development of the Macedonian IT sector.

The fourth priority is education, youth and inclusive development, three areas that are organically linked. To get out of the downward spiral of poverty, social exclusion and mass emigration, we need education adapted to the needs of the labor market. Our priority is to work to reduce poverty and social exclusion, to develop contemporary cultural policies, to promote respect for human rights, and to invest in the media literacy necessary to distinguish truth from falsehood.

These four priorities are interdependent and equally important for the development of North Macedonia and therefore should be implemented at the same time, without ranking them. The teams that were engaged reached a broad expert consensus and, from that position, let me highlight the following three expectations that I have.

First, as a framework that focuses on the big picture, MKD2030 should be incorporated in the detailed National Development Strategy 2022-2042 prepared by the Government of the Republic of North Macedonia. Thus, MKD2030 will be a guarantee for the continuity of the sectoral policies, regardless of the future changes of the political sets in power. This map will help current and future policy makers not to deviate from the defined path and not to get stuck in authoritarian and populist ideas that will surely compromise the long-term development of the country, but also its stability.

Second, as a non-partisan platform, MKD2030 can serve as a basis for overcoming deep divisions through a symbolic renewal of the social contract between the citizens and the state. Development priorities will have to be respected by every future government, and apply to everyone equally. Thus, MKD2030 can be a productive part of the civil reconciliation process.

Third, MKD2030 is not a holy book, so we expect the document to stimulate debate on the proposals contained therein and help us in public discourse, instead on irrelevant daily political episodes, to spend energy thinking and acting to implement long-term development policies. It goes without saying that in that part we expect reasoned criticism and views different from ours.

We decide for ourselves whether we will stagnate or progress. And, in times when we have to manage several crises on a daily basis at once, we must not lose sight of the vital national strategic priorities, and they are, by the end of this decade, to jointly witness overall economic and social development, greater confidence in institutions and drastically lower emigration of young people.

The Development Framework MKD2030 can help us make the Republic of North Macedonia a better place to live in, where the Macedonian citizens will have the chance to achieve their life ideals. Without false moralization and without pathos to say, this is a historical responsibility that we all, especially the holders of public office, have in relation to our living children and grandchildren, but, no less to the future generations to whom we must leave the country in a far better condition than it is today.