Official visit to the Republic of Slovenia, meeting of presidents Pendarovski and Pahor 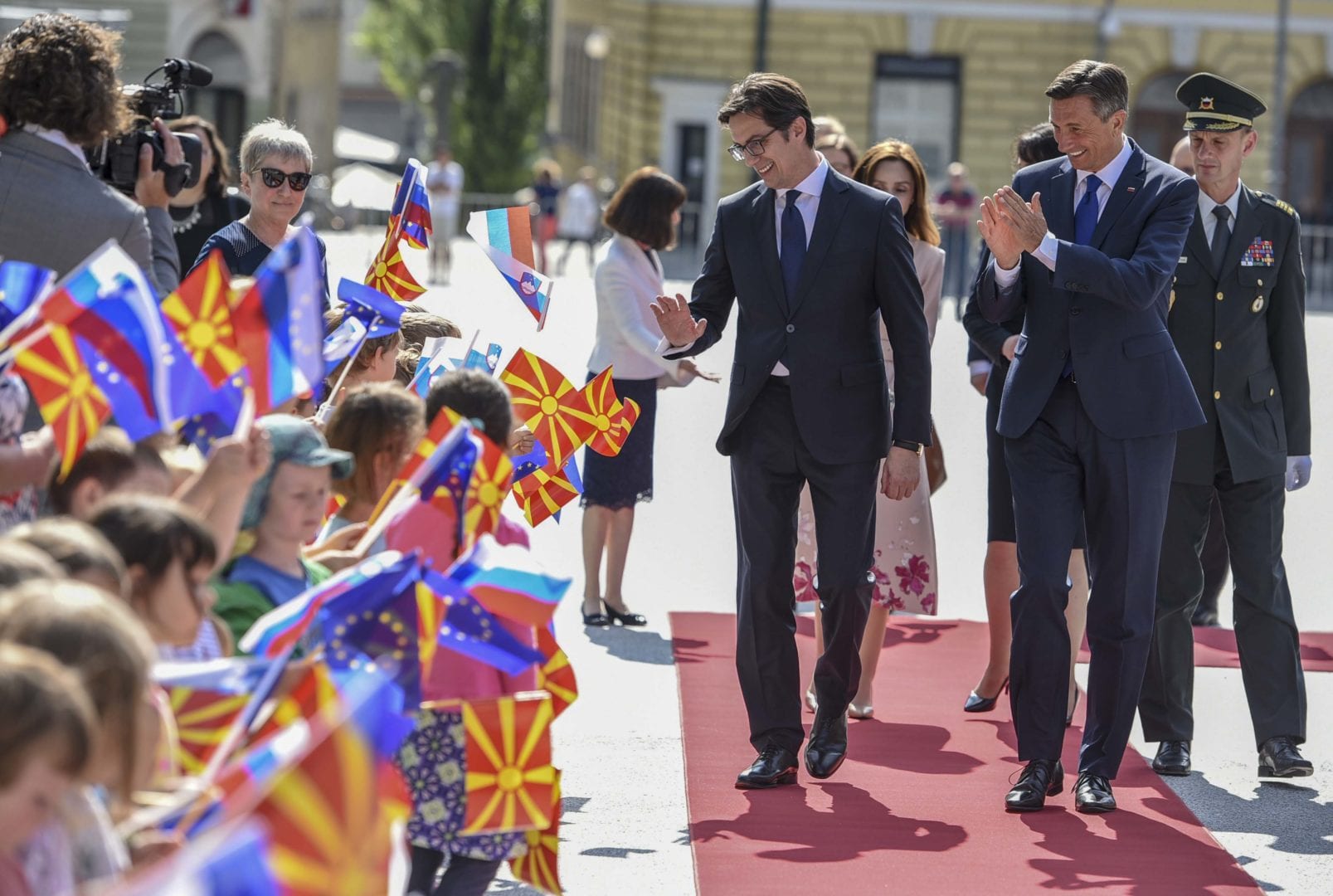 President Pendarovski was received with high state and military honors by the President of the Republic of Slovenia, Borut Pahor; afterward the two presidents held a tete-a-tete meeting at which they confirmed the traditionally close relations and the high level of understanding and trust between the two countries. At the meeting, Slovenia’s support for our NATO and the European Union integration processes was highlighted.

At the press conference, President Pendarovski in his statement, expressing his thankfulness for Slovenia’s support, said that this year our country received the best Progress Report by the European Commission.

“North Macedonia, from a state in which the events, only two years ago raised concerns among our allies, today, by both the European Union and NATO, stands out as a model for successful transformation for all countries in our region”, President Pendarovski said.

The President recalled the two difficult but necessary decisions, important for our future and for the stability and prosperity of the entire region – the agreements with Bulgaria and Greece. Today, the President said, North Macedonia has no open issues with its neighbors, and the blockades and objections are replaced by open lobbying by our neighbors for our integration in NATO and the European Union.

“I sincerely hope that the European Council, as announced, at the beginning of autumn, will decide on the start of accession negotiations. I wish the same for our neighbor, the Republic of Albania”, President Pendarovski said.

Responding to a journalist question, asked if he expects any difficulties with the new Greek government over the Prespa Agreement, President Pendarovski said that the publicly declared commitments of the new Greek government are that they will respect the Prespa Agreement and that they will strive for a more strict or more rigorous implementation.

“And, we will insist on the strict implementation of the Prespa Agreement because it contains obligations that both parties should respect. I can tell you that the vast part and the most difficult obligations in our part have already been implemented. From our point of view, obligations that are easier to implement remain, and above all, I refer here to the Commission that should solve the issue of trade marks and signs that will be on products that need to be exported in the territories of both countries. So, we do not expect additional problems in the correct diplomatic relations that we intend to maintain with the new Government of the Hellenic Republic, and, as before, to continue to cooperate. Being our biggest opponent on the Euro-Atlantic path, the Hellenic Republic is today our most stable ally and the biggest supporter. We expect it to remain so, it is completely irrelevant that there is a new Government in Athens, because the principles of the Prespa Agreement are, in our deep assurance, correct, balanced and in the interests of the two peoples of both countries”, the President said.

“I do not think such ideas should be at the table in the 21st century. We must not, for the safety of all of us in this region and for the possible problems that the so-called Old Europe may have, think of returning in the early 1990s when we talked of the so-called firm security issues: territory, borders, demarcations, etc. I am personally convinced that the borders should remain where there are; any other option for re-negotiation and change of borders or, in the worst case, exchange of people and territories, will contribute to the domino effect and certainly several countries in the region will be the first collateral damage. Here, above all, I refer to my country for which I have to take care. Therefore, in all my meetings after I have been elected President, I say that we may not change the principles that were so far applied in the establishment of new states, because it would cause surely and very soon a new spiral of armed conflicts and I think that it is not in favor of anyone. Not only of the peoples living in the Western Balkans, but also in Europe”, President Pendarovski said.

Asked what he expects from the new European Commission and whether he is afraid of further continuation of the procedures regarding the enlargement of the European Union, i.e. a date is not set this autumn, President Pendarovski responded:

“First, I have to be honest and say that we all in North Macedonia are disappointed that the European Union did not deliver the promise of last year’s Sofia Summit, when it was clearly agreed a date to be set in June, right after the European elections. I hope, we have received such guarantees from our strong supporters and friends from Brussels, that this time it really is only a matter of technical delays in the process, that there are no additional political procedures or preconditions for starting negotiations, and that the decision will actually be approved in the German Bundestag in September, and the European Union will make its decision in October, specifying a date for negotiations. We hope, and as agreed, at the latest by September, we will have new functional European institutions that will be able to make that decision. The European Union, of course, from all the rest and from those who had some reservations last year about our start of negotiations, literally from all the countries that at the last year’s summit expressed some reservations, that this time the Republic of North Macedonia really and objectively delivered everything it was asked to, appreciates this fact as it is appreciated in Brussels, that generally by all the member states we are a state which, in a relatively short period of time, in only 2 years, from a captured state, as it was defined by the European Commission in its 2017 Report, became a country that is on the threshold of NATO membership and on the threshold to open negotiations with the European Union. Such a speedy recovery has not been noticed in more recent Europe and, I am telling you, that it is respected by all our friends in Brussels”, the President said, pointing out that the project called European Union and NATO is supported by all ethnic communities and is the strongest cohesive factor of society, and he, as a responsible politician, must follow it.

There are alternatives, the President said, in regional organizations or the Far East, in Eurasia, but our place is not there.

“North Macedonia has made remarkable, incredible, really very difficult steps to meet the high expectations of Greece and the international community, so that it can continue along the path of Euro-Atlantic integration. Regarding NATO, there is an evident progress, out of 29 countries, 21 have already ratified the Accession Protocol, and regarding the European Union, it is on halt. It was promised that North Macedonia, in case of signing and ratification of the Prespa Agreement, will start negotiations in June this year, but that did not happen. Slovenia would like, as in the talks with Macedonian friends, as well as in the talks with our friends in the European Union, in the European family, to say that this is wrong, it is not good and that the next Summit of the leaders of the European Union is an opportunity this error to be corrected, the Slovenian President Pahor said.

President Pahor said that now the credibility of the European Union and its principles are in question.

Asked about possible alternatives regarding the EU enlargement, President Pahor said that President Pendarovski’s position on this issue is well understood and supported.

“If you look at the map of the world, the Western Balkans is surrounded by countries of the European Union and a natural way to spread is the enlargement to the Western Balkans. I see no other perspective on these countries and what I would like to say, as I say to my European friends and colleagues, is that postponing the strategy could restore volatility in the Western Balkans”, President Pahor said.

Tonight in Ljubljana, President Pendarovski will deliver a lecture at the International Institute for Middle-East and Balkan Studies (IFIMES) on “The future of North Macedonia – How to step up the integration to the European Union”.