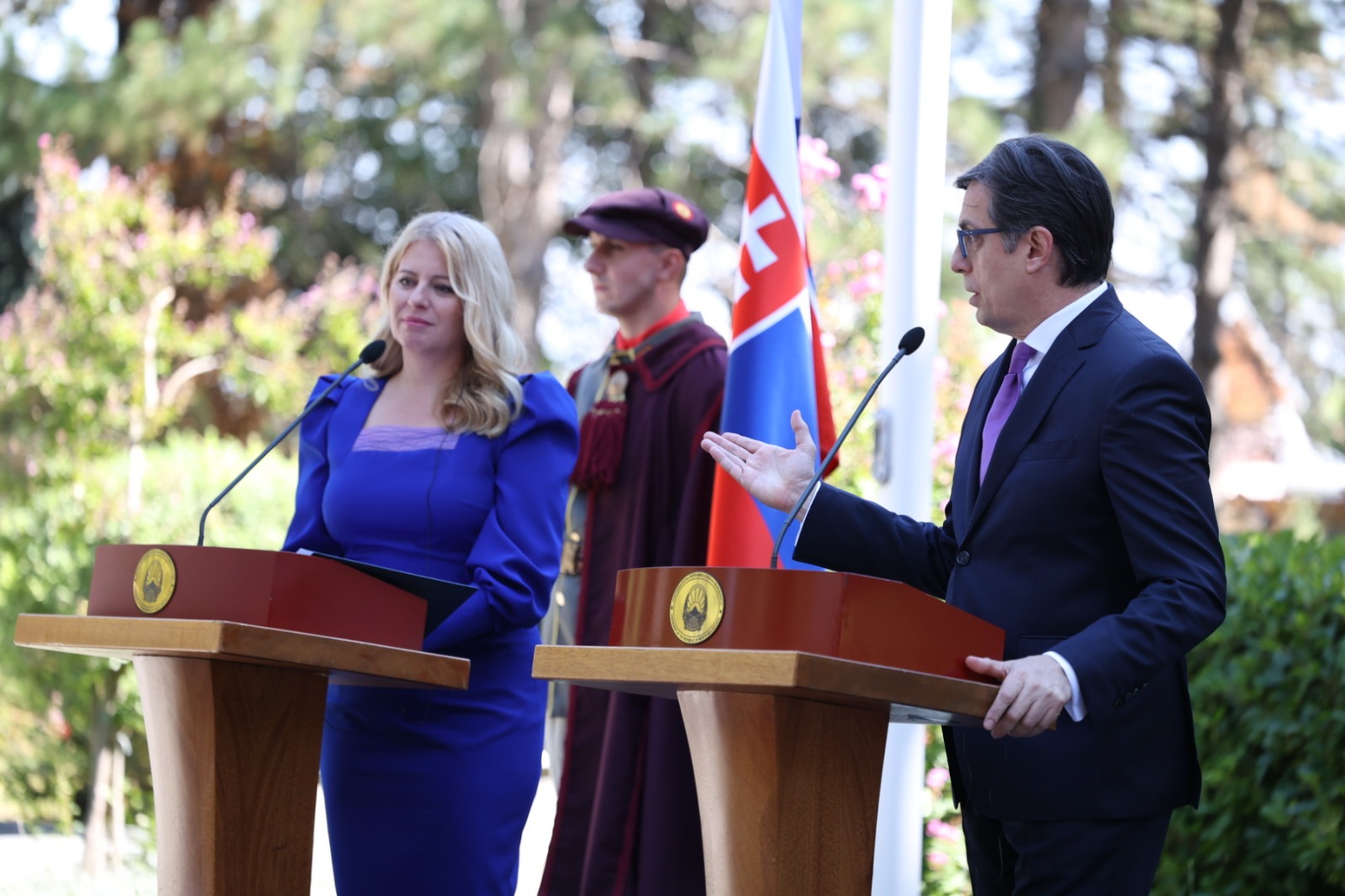 President Stevo Pendarovski welcomed today, with the highest state and military honors, the President of the Slovak Republic, Zuzana Caputova, who is paying an official visit to the Republic of North Macedonia.

As part of the visit, in addition to the tete-a-tete meeting, a plenary meeting of the official delegations of North Macedonia and Slovakia was held, after which President Pendarovski and President Chaputova held a joint press conference.

It is an exceptional honor, on the eve of the most important state holiday, to be the host of the Slovak President, my esteemed colleague, Zuzana Caputova.

The friendship between our two countries is based on mutual support and respect, cooperation in areas of common interest, but, above all, on deep cultural ties, for which the heritage of the holy brothers Cyril and Methodius is most worthy. That heritage reminds us of the common past, but also binds us to the common European future, as a kind of mission of unification, exactly like that of the all-Slavic educators.

With this visit, the positive trend in the development of bilateral relations is confirmed, all the more so because it is realized right at the onset of our EU accession process. We welcome the Slovak experience from the process of accession to the European Union, which will be of great help to us in that process.

Availing myself of this opportunity, let me express my gratitude for the constant and extremely loud Slovak support for Macedonian European integration. Exactly when it was the most difficult, Slovakia, as a true friend, uncompromisingly supported us in all situations.

I sincerely hope for a similar approach of all member countries in the future, following Slovakia’s principled approach, as one of the driving forces of the Visegrad Group.

In this context, with President Caputova, we exchanged opinions on strengthening regional cooperation as an important segment in the European integration, and we discussed the successful model of the countries of the Visegrad Group as an extremely useful example for the countries of the Western Balkans.

Moreover, this visit happens at one critical moment for Europe. As NATO member states, we also discussed the security situation in the continent in the context of the war in Ukraine and the consequences thereof that we all feel.

Special focus in the talks was put on intensifying the cooperation in the field of economy, which has not reached its real potential, although bilateral trade has been growing constantly in the last 5-6 years. I expressed expectation that the investments of Slovak companies in our country will increase, especially after we have launched the negotiations with the Union.

In the end, I would like to express my confidence that in the next period the relations between North Macedonia and Slovakia will be raised to an even higher level, and for that, apart from the shared European values ​​and close cultural and spiritual ties, the opening of our embassy in Bratislava will contribute further. During this month, I expect our first resident ambassador extraordinary and plenipotentiary to assume her duties in the capital of the Slovak Republic.

Once again, I wish you and your delegation a warm welcome and a pleasant stay.