Pendarovski-Mattarella press conference: Italian support for the EU enlargement policy and for the Macedonian European integration 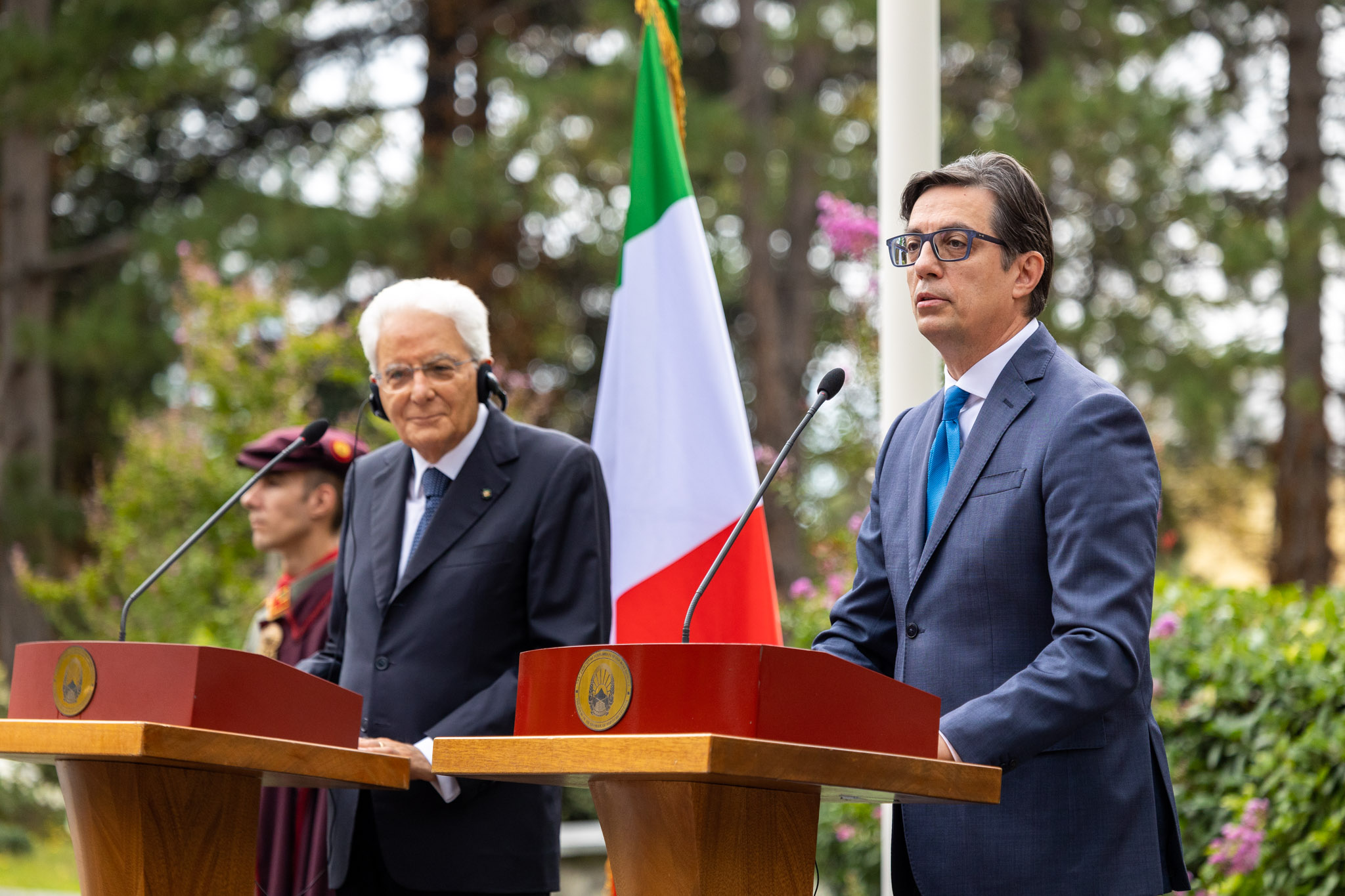 President Stevo Pendarovski welcomed today with the highest state and military honors the President of the Italian Republic, Sergio Mattarella, who is paying an official visit to the Republic of North Macedonia.

As part of the visit, in addition to the tete-a-tete meeting, a plenary meeting of the official delegations of North Macedonia and Italy was held, after which Presidents Pendarovski and Mattarella held a joint press conference that began with a minute’s silence on the occasion of the death of Her Majesty, Queen Elizabeth II.

Below is the full text of President Pendarovski’s statement:

Today, I have the great honor, the day after the celebration of Independence Day, September 8, to host my dear colleague, the President of the Italian Republic, Mr. Sergio Mattarella.

I am really happy that President Mattarella fulfilled the promise given during our last meeting in Rome last year and managed to realize this significant return visit to North Macedonia, which happens almost 23 years after the last visit of an Italian president to our country.

Through such constructive meetings, as the meetings with my dear colleague always are, a new, better environment is created for the development of the Macedonian-Italian relations, which have been friendly and solid for years.

At the meeting, we discussed the current topics of bilateral relations and the situation in the region of the Western Balkans, European integration, security issues and modalities for dealing with the consequences of the economic and energy crises that the world is facing.

In the context of bilateral relations, we concluded that the economic, parliamentary and sectoral cooperation is developing in an upward direction, for which we expressed readiness for their further deepening.

One of the key topics we discussed was our European integration process. I want to publicly thank Italy for its support of the EU’s enlargement policy and its undisputed support for us in that context.

Taking into account that in the coming period a hard work and investment of all national capacities awaits us, the experiences that Italy is ready to share with us will be really useful.

During the talks, I stressed that North Macedonia remains a credible partner of the Union in dealing with the current geopolitical and security challenges, which is also evidenced by the fact of our 100 percent compliance with the common European security and defense policy of the Union. As allies in NATO, with President Mattarella, we exchanged opinions and information about the war in Ukraine and reaffirmed the call for an immediate stop to Russian aggression against a sovereign state.

We also talked about the current political situation and open issues in the Western Balkans. In this context, I asked for support from President Mattarella in dealing with the consequences of the energy crisis, that is, to be granted access to the mechanisms and instruments of the Union for mitigating the negative effect of the energy crisis on our countries.

To sum up, this was a significant meeting as befits two friendly countries. Let this be an occasion for a joint celebration next year of the 30th anniversary of the establishment of diplomatic relations between our two countries, which will be another opportunity to strengthen Macedonian-Italian friendship.