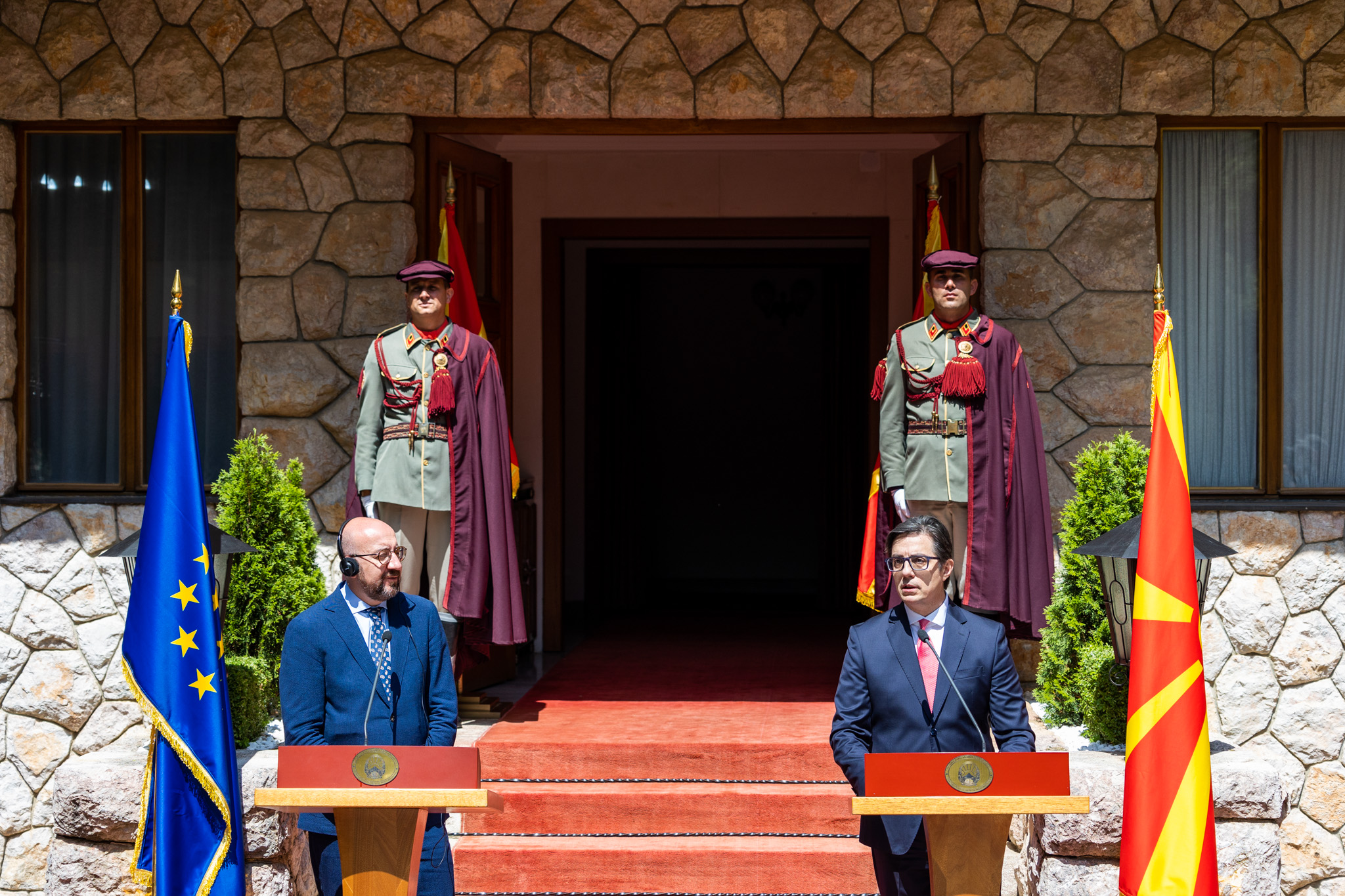 President Stevo Pendarovski, today in “Villa Biljana” in Ohrid, welcomed the President of the European Council, Charles Michel, who is paying a visit to the Republic of North Macedonia, held a tete-a-tete meeting and a joint press conference.

First of all, let me express my satisfaction that I am your host again, this time in Ohrid. I am really honored that you are wrapping up your regional tour in North Macedonia.

Your visit in this turbulent period for Europe and the world, just a few days before the June EU Summit, points to the need for coordination of the steps between the Balkans and the Union in the face of the need for decisive and principled decisions.

I sincerely hope that next week in Brussels, the leaders of the European Union will finally fulfill their promise of March 2020, when the General Affairs Council unanimously decided to start accession negotiations with North Macedonia as soon as possible.

Today we talked about the fact that the prolongation of the Macedonian European integration shakes the credibility of the EU, which, at the same time, means a decrease in its influence among our citizens. The conditions set up by a member state on a candidate country out of bilateral reasons not only flagrantly violates the promise of a European future for the Western Balkans, but may fully compromise the enlargement policy and set a dangerous precedent that will put an end to the process, which for years was considered the Union’s best foreign policy.

The United Europe project has always had a clear geopolitical aspect, but during the war on the continent, that dimension is particularly emphasized. Therefore, for the survival of the EU enlargement policy, increased geopolitical responsibility is necessary, especially among the EU member states.

Despite the real disappointments and the fatigue of waiting for a breakthrough on the European path, our commitment, among other things, is strongly supported by two things: our full, one hundred percent compliance with the common foreign and security policy of the European Union and our joining to all the packages of sanctions against the Russian Federation on the one hand, and, on the other hand, having the European Union as our, by far, most important trading partner, providing support and financial assistance for the implementation of the necessary reforms.

We are looking forward to the joint meeting of the leaders of the European Union and the Western Balkans, which will take place next week on June 23 in Brussels. I was thoroughly informed about this meeting today by my guest. Therefore, I would like to stress that every initiative that would really contribute to unblocking or accelerating the integration process is welcome. This is how we see the latest idea for greater unification between us through the new form called the European Political Community. Of course, we do not understand that community as a consolation prize or as a compensation for membership, but only as an additional tool that will help for faster integration and greater unity in Europe.

Thank you for the efforts you and your colleagues at the lead of the European institutions are making to keep the European integration of the region high on the list of priorities. In conditions of multiple crises and ongoing war on the European soil, it only confirms the awareness of the urgency of consistent delivery according to the merits of each country in our region.

I wish you a pleasant stay in Ohrid, and, of course, I wish you a successful European Summit and making decisions that we have long deserved.