Pendarovski-Pompeo: Deepening of the Strategic Partnership with the US The President of the Republic of North Macedonia, Stevo Pendarovski, received today in Villa Biljana in Ohrid, Mike Pompeo, Secretary of State of the United States of America.

President Pendarovski said that the visit of the US Secretary of State, Pompeo, in an extremely important period for our country, is a confirmation of the friendship between the United States and North Macedonia, based on shared values ​​of peace, freedom and democracy.

“The United States has been our strategic partner since our independence, and the US support has been crucial in defense reform and transformation of our Army in meeting the criteria for NATO membership. Through the development programs, the United States has helped us strengthen the institutions, the rule of law, the judiciary, the civil sector and the media, as well as supported the building of a favorable business climate for trade between the two countries”, the President said.

President Pendarovski thanked for the continued US support in times when the country was resolving difficult internal stability issues, as well as in reaching a compromise over the decades-long name dispute in the spirit of good neighborly relations and regional cooperation.

“North Macedonia will continue to work closely with the United States. I believe that increased US support is needed in the coming period, in which North Macedonia should become the 30th member of NATO and start accession negotiations with the European Union”, President Pendarovski said.

Secretary Pompeo thanked for the warm welcome in North Macedonia as part of his tour to Italy, Montenegro and Greece. He reiterated that the US support for deepening the friendship between the two countries will continue in the future, which is important not only for the Republic of North Macedonia but also for the stability and security of the entire region. 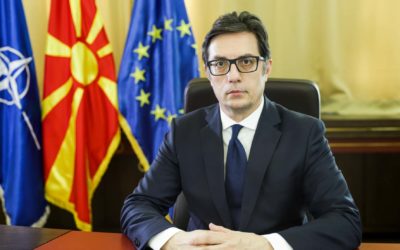 President Stevo Pendarovski visited today the civil society organization “Polio Plus” and had a meeting with its representatives. At the meeting, the interlocutors opened the topic of implementation of the United... In line with the efforts to strengthen democratic political values, promotion and protection of human rights and freedoms, political pluralism, mutual tolerance, unity and solidarity, with a decision of President Stevo Pendarovski, a Presidential Center for Political...