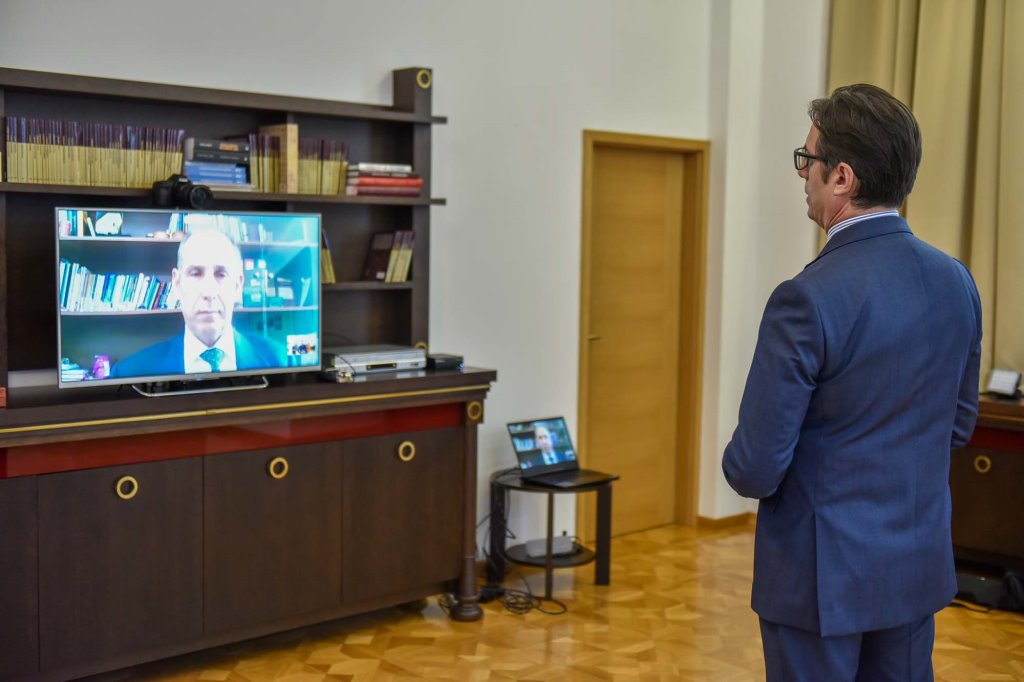 President Stevo Pendarovski held a video conference call today with Constantinos Eliades, the newly appointed Ambassador of the Republic of Cyprus to the Republic of North Macedonia, resident in Belgrade. Due to the COVID-19 pandemic, Ambassador Eliades, as a non-resident ambassador, instead of a protocol ceremony, handed over the credentials in writing.

Congratulating him on his appointment, President Pendarovski wished Ambassador Eliades success, who is the first Cypriot Ambassador accredited to the Republic of North Macedonia, following the establishment of diplomatic relations between the two countries in August 2019.

During the conversation, President Pendarovski stressed that the Republic of North Macedonia is ready for the development of friendly relations with the Republic of Cyprus, in the political, economic, trade, as well as in other areas of mutual interest. President Pendarovski expressed expectation that the establishment of diplomatic representation between the two countries at the level of ambassadors will be a strong impetus in that direction.

In the context of the country’s strategic aspirations, President Pendarovski stressed the expectation of a formal start of the country’s accession negotiations for membership in the European Union, with the holding of the first intergovernmental conference. In that regard, President Pendarovski stressed his confidence in reaffirming support from the Cypriot side.

During the conversation, views were exchanged in the context of the strategic aspirations of the Republic of North Macedonia for EU membership, the current situation with the COVID-19 pandemic in both countries, as well as dealing with the health, economic and social consequences.

President Pendarovski wished success to Ambassador Eliades in the performance of his responsible function. The President of the Republic of North Macedonia, Stevo Pendarovski, attended and addressed the opening ceremony of the jubilee 60th edition of the "Ohrid Summer Festival" at the Ancient Theater in Ohrid. The renowned international festival is traditionally held under... Today we remember a horrific date in history when about 4,300 Roma and Sinti were slaughtered in the Nazi Auschwitz-Birkenau concentration camp during World War II. That dim ideology allowed the greatest evil in history to take place, causing the loss of millions of... President Stevo Pendarovski, on the occasion of August 2nd – the Republic Day, Ilinden, laid fresh flowers today in front of the Memorial Center ASNOM - Pelince. Delegations from the Cabinet of the President were... Distinguished attendees, August 2nd is an exceptional occasion to remember both the historical and the contemporary significance of the Ilinden cause. The historical epic is not just a struggle for freedom against tyranny. Ilinden, the one in Krushevo in 1903 and...