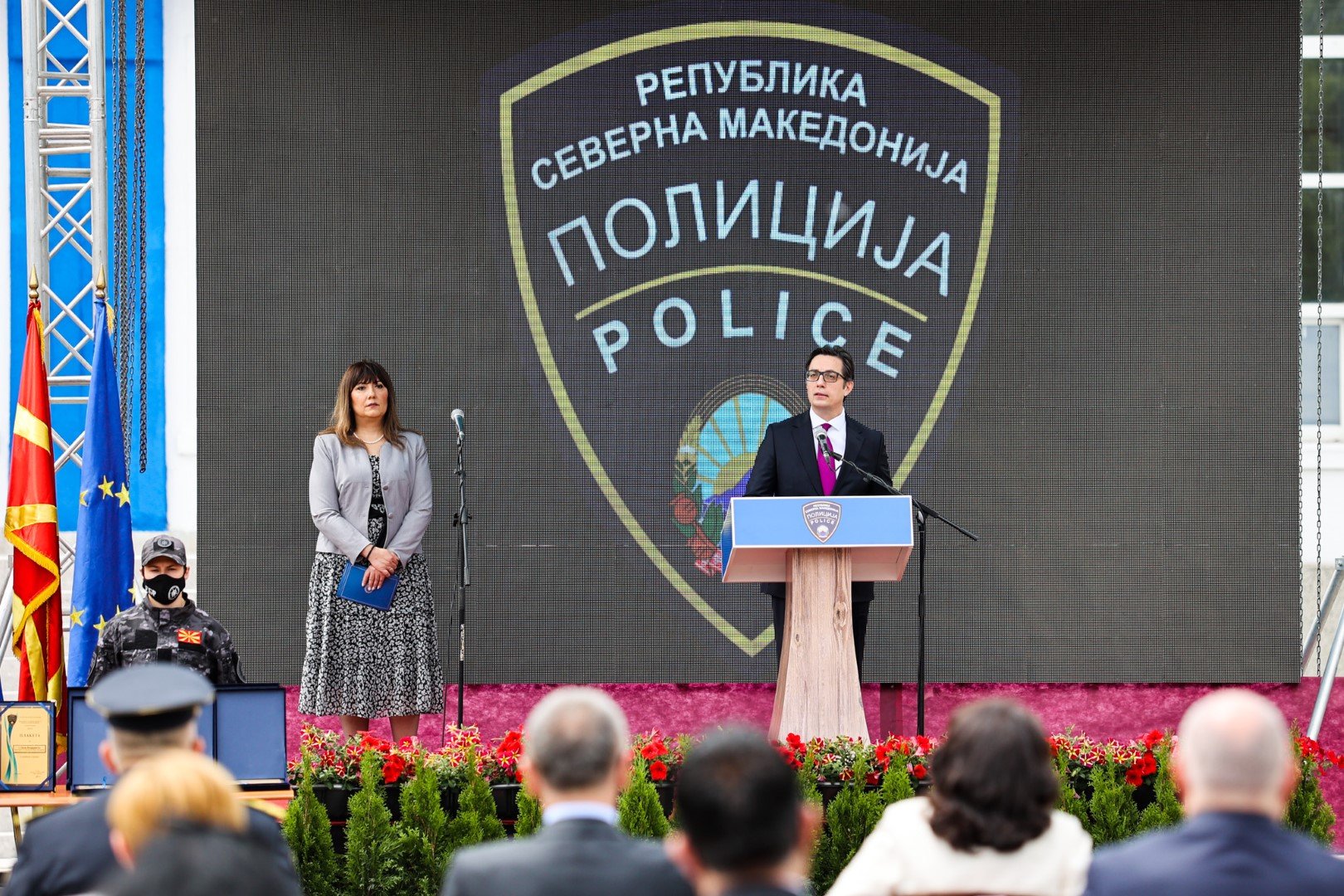 President Stevo Pendarovski addressed today the celebration of May 7 – Police Day in the Republic of North Macedonia, which took place at the Police Center “Gjorce Petrov” in Skopje.

During the ceremony, President Pendarovski was awarded a special plaque for partnership and cooperation by the Minister of Interior, Oliver Spasovski.

I am honored to greet you on the occasion of May 7 – Police Day in the Republic of North Macedonia.
This is an important day because it is a structure that has an irreplaceable role in law enforcement, maintaining public order and peace, respect for human rights and freedoms and protection of state borders. With just one look on these extremely important competencies, it becomes clear that the trust of the citizens in their country and in its highest institutions largely depends on the work of the Ministry of Interior.

Citizens’ trust in institutions must be reaffirmed on a daily basis, whether it is about small local incidents, the fight against crime and corruption, or major global issues such as the Covid-19 pandemic. For more than a year, the police have been one of the key links in tackling the pandemic. Police officers are tasked with assisting the health system around the clock in implementing measures to prevent the spread of the virus. Therefore, on behalf of the Macedonian citizens and on my personal behalf, I thank you.

In order to have the constant trust of the citizens, the police officers are obliged to perform the profession they have chosen with dignity. Several principles are crucial in your work:

First, respect for the law and the rule of law. Police is the institution that usually reacts first to the threats to the democratic order and to the life and property of the citizens, and it will do so successfully only if it acts according to the law, and not according to the wishes of individuals or influential structures.

Second, professionalism. Police officers are obliged to refrain from abusing or exceeding the given powers and not to act arbitrarily depending on the social status of the individuals.

Third, inextricably linked to the former – impartiality. In any democracy, the law applies equally to all. Therefore, the police must implement the laws in a neutral manner, regardless of the ethnic, social, political, party or any other affiliation of the people.

The police should be a depoliticized and non-party structure from the lowest regional units to the top departments and administrations in the Ministry. Exactly impartial action is a precondition for improving the relationship between the police and the citizens because without their support the police cannot be fully efficient.

Fourth, the sacrifice in the protection of the lives, health and property of the citizens. Your profession is risky. Today we pay tribute to all police officers who have lost their lives in the past years while performing their professional duty. When you make the highest sacrifice in defending the rule of law and human rights, it is proof that you have the right to wear your official uniform and badge.

Fifth, accountability and transparency to the public and institutions. In this sense, institutional supervision of the police through internal and external control is important. Special emphasis should be put on the prevention of corruption because the cases when the people in charge of law enforcement break the law themselves should be reduced to an absolute minimum.

The role of the police is even greater in heterogeneous societies like ours. The catalyst in the promotion of that cooperation is the appropriate ethnic representation at all levels in the Ministry, for all citizens in our country to have full confidence in the police structures.

Attention should also be paid to the role of women in the police. That process has begun, the results are visible, but it is necessary to completely overcome the stereotypes related to gender equality because despite the tradition and prejudices that are particularly strong in conservative societies, police is not just a male profession.

For successful functioning of the Ministry, prevention is crucial and therefore it is necessary to establish good relations with the community in which it operates, before the problems arise.

In terms of all the principles and parameters listed above, it is indisputable that the Ministry of Interior today is far ahead of the situation 5 or 10 years ago when the institution was just a poorly camouflaged party headquarters. However, in order to successfully fulfill its tasks in a lawful and dignified manner, we must invest in the police.
Although, from a security point of view, with NATO membership we have entered calmer waters, security challenges, such as terrorism, religious extremism, cyber-attacks, disinformation campaigns, hybrid threats, will not disappear. The reforms in the security-defense and security-intelligence systems have so far significantly improved their performance and brought the country closer to international standards. But the reforms must continue because the security environment is constantly changing.

In that sense, modern equipment, armaments and standards in the workplace are an important precondition, but the most important factor for success, however, is the individual. The professional qualifications, recruitment, selection, employment and training of police officers must be constantly taken into account, and the promotion must be based on objective criteria, with the ethical filter, i.e. the integrity of the individual.

Respected members of the police,

Citizens trust the state as much as they trust its institutions. One of the most important institutions in every country is indeed the Ministry of Interior. Therefore, I expect that in the period ahead, as before, your tasks, which are high risk and complex, to be performed with dignity and honesty and not to be ashamed when you say where you work.
At the very end, once again, let me congratulate all members of the police, all employees of the Ministry of Interior on May 7 – Police Day!