The President of the Republic of North Macedonia, Stevo Pendarovski, addressed today the plenary session of the Summit of Heads of State and Government of the participating countries in the South-East European Cooperation Process (SEECP), which is held in Sarajevo, Bosnia and Herzegovina.

In his address, President Pendarovski pointed out that the Republic of North Macedonia has recognized the moment when the European Union pays great attention to the region and has taken concrete steps.

“With the Prespa Agreement with Greece and the Treaty of Friendship, Good Neighborhood Relations and Cooperation with Bulgaria, we have closed difficult issues from the past. Today, North Macedonia is the only country in the Western Balkan region that has no open issues with its neighbors and is constantly improving its relations. We are on the threshold of full-fledged membership in NATO. We received an impeccable, clean recommendation from the European Commission to start the negotiations for membership in the Union. North Macedonia fulfilled its obligations. Now, the European Union and the member states are to recognize the moment and fulfill their part of the obligation”, President Pendarovski said in his address.

In the context of the efforts of some of the European leaders to postpone enlargement as long as the institutional reform in the Union continues, President Pendarovski reminded that from the very beginnings, the European Union has transformed and expanded simultaneously.

“These two processes are not exclusive but complementary and make the Union adaptable to changes. If the Union was not expanded while it was changed, it would not be what it is today – the most influential peace project that unites the European continent. This parallel approach is also conditioned by objective circumstances. Our globalized world does not give us time to find solutions without making decisions. The only way to learn how to master the challenges is through experience”, President Pendarovski said.

President Pendarovski stressed that the start of the negotiations does not mean instant membership of North Macedonia in the EU, but a beginning of a long process that may last for a decade.

“Now is not the time for excuses and withdrawal from the given promises, but for courageous decisions that will open a new perspective for our region”, President Pendarovski said.

The European Union, its member-states and candidates for membership, but also the European idea in general, according to President Pendarovski, need a brave and visionary leadership, ready to respond to all challenges.

“It takes European leadership to recognize the right time and make the right decisions”, President Pendarovski said, adding that full integration of all countries of our region into the Union will positively affect the overall stability of the European continent

“We are encouraged by the messages of support and the promise that the decision to start accession negotiations will be taken this autumn, in October. Only this will confirm the principle of merit-based advancement, but will also send strong support in the country, in the region and wider that investing in solving difficult issues pays off and ensures progress of the country”, President Pendarovski said.

“The European Union has responsibility towards our region and our countries. This does not mean that we should wait for the Union to finish our homework and implement the reforms instead of us. The Union indeed has the responsibility to give us the opportunity to start the negotiations through which we will change and reform until we achieve the necessary European criteria and standards. Experience shows that there is no greater motivating force for reforming than membership negotiations”, President Pendarovski said.

In his address, President Pendarovski also referred to, as he said, a burning issue about the emigration of young and educated people from the countries of the region.

The only way to keep young people in our countries is to offer them new opportunities and perspectives to realize their potential and gained knowledge in our countries, in our region. To enable them to grow in a region of solidarity and familiarity, aware of the wealth created by the diversity, of the interdependence, convinced in the value of a united region in a united Europe, respecting human rights and freedoms and democratic, European values. This can be achieved only with the European Union”, President Pendarovski said in his address at the Summit of the South-East European Cooperation Process which is held in Sarajevo. 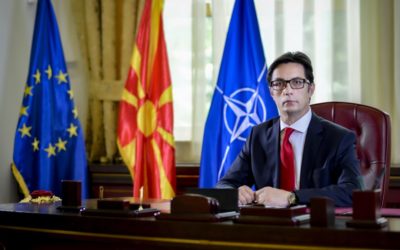 President Stevo Pendarovski, on the occasion of September 28, International Day of Bosniaks, sent a congratulation message to the members of the Bosniak community in the Republic of North Macedonia. Dear fellow citizens, On my personal behalf and on behalf of all the... The President’s Wife, Elizabeta Gjorgievska, attended and addressed today the “Race for the Cure" breast cancer awareness event in the City Park. “We have a double obligation regarding the education, prevention and... Message by President Pendarovski on the occasion of Yom Kippur