President Pendarovski at a press conference with Polish President Duda: Poland is a strong supporter of our European integration 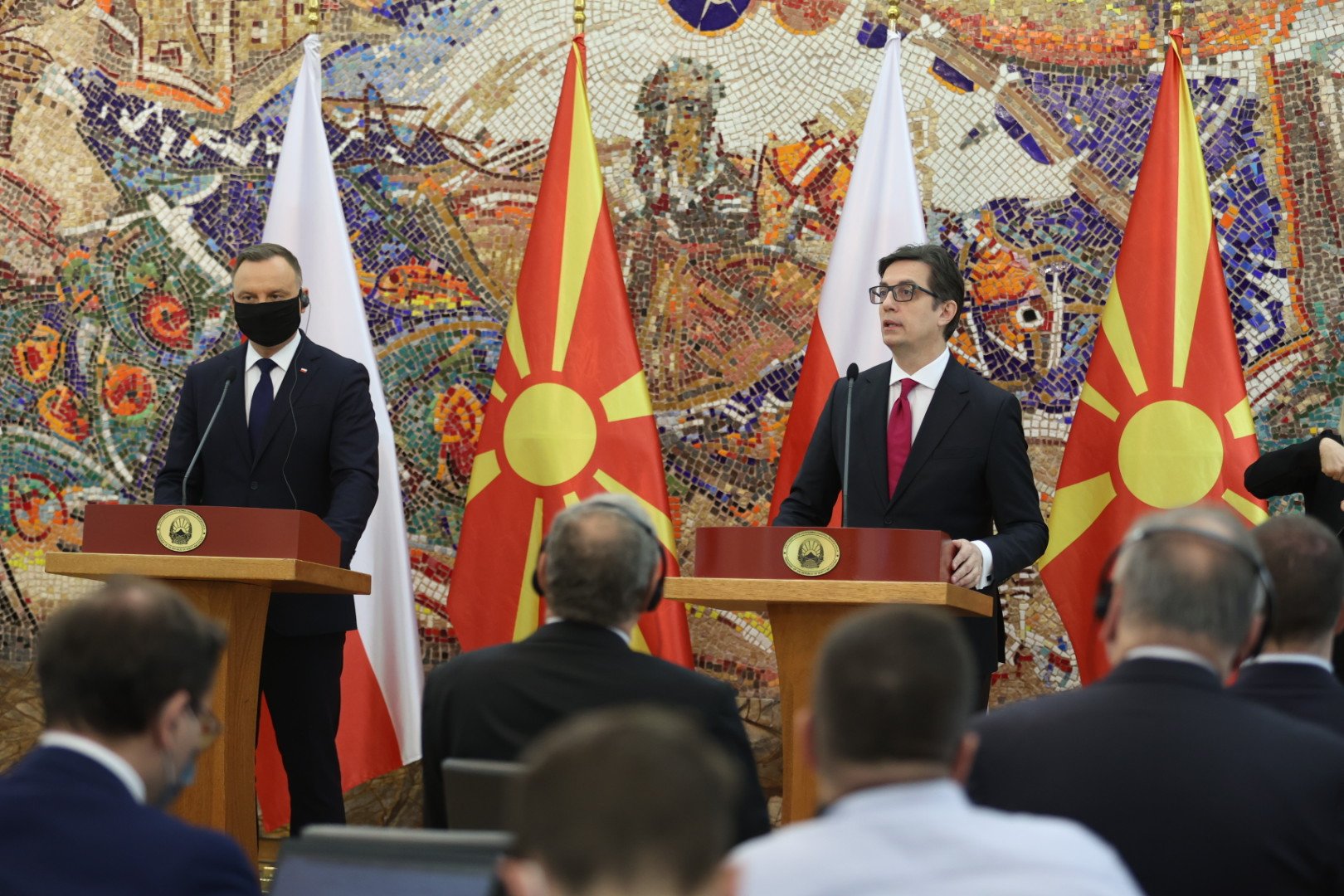 President Stevo Pendarovski received today, with the highest state and military honors, the President of the Republic of Poland, Andrzej Duda, who is paying an official visit to the Republic of North Macedonia.

During the visit, in addition to the tete-a-tete meeting between President Pendarovski and President Duda, a plenary meeting of the official delegations of North Macedonia and Poland was held, followed by the joint press conference of the two presidents.

It is a great honor for me that today I am hosting my colleague, the President of the Republic of Poland, Andrzej Duda. This official visit, that is taking place after a year and a half since the successful visit I had in Warsaw, is undoubtedly a confirmation of the friendship between the two countries and the strong Macedonian-Polish relations.

Today, we had a productive meeting with President Duda and a substantive conversation dedicated to more topics of mutual interest. We discussed, above all, bilateral relations, the situation in the Western Balkans region, the European integration, as well as the current challenges we face as allies in NATO.

I expressed my special gratitude to the President and the Polish Government for the selfless donation of 200,070 Pfizer vaccines made today.

I would like to take this opportunity to state that in the past few years our relations have been developing upwards in several areas and that makes me particularly happy. We develop fruitful sectoral cooperation, based on mutual respect and understanding. Hence, at the meeting with my Polish counterpart, I expressed our readiness to further increase cooperation in areas of common interest, especially in economy, investment, tourism, science, culture and education, as well as to increase cooperation in the field of security and defense.

My visit to Warsaw took place just before the outbreak of the pandemic, which has made huge consequences for the economies of both countries. Therefore, it is of particular importance that even at a time when we are still engaged in the continued struggle with COVID-19, we talk about the ways in which our economies can recover in the post-COVID period. In this context, today in Skopje we are organizing the Macedonian-Polish business forum where companies and institutions from both countries, through direct meetings, will consider ways for even more intensive cooperation in the future.

With President Duda, besides the talks on political and economic issues, we also tackled the Macedonian-Polish educational, linguistic and cultural relations. The cooperation of the Macedonian and Polish Slavists in the two countries continues, among other things, within the International Seminar on Macedonian Language, Literature and Culture.

One of the key topics of our meeting was european integration, namely the start of our membership negotiations. Poland has always been our strong and voiced supporter and in that direction we had a productive discussion with President Duda. Poland shows great understanding of the position we are in and makes efforts to help overcome the obstacles we face, not only bilaterally, but also through the Visegrad Group, as well as through other regional forums in which it is a member.

In this context, I emphasized that a reliable test of the credibility of the enlargement process is the upcoming General Affairs Council of the European Union in December and the opportunity to make a step forward on the road to the EU. Support for unblocking our European integration is extremely important for the stability and prosperity of the entire region and is an additional impetus for the reform process. Therefore, in the talks we addressed issues related to the current situation in the Western Balkans region, and on that occasion I shared with President Duda our views on the regional challenges and pending issues.

Moreover, as NATO allies, we exchanged views and information on the latest developments on the Polish-Belarusian border, and expressed to President Duda our full solidarity and support for overcoming this situation. I assured that for us as a country the Belarusian leadership actions orchestrating this humanitarian crisis are completely unacceptable. We continue to monitor the situation within NATO and call for an immediate end to all activities aimed at further destabilization of the situation on the border of our allies, Poland, Lithuania and Latvia.

At the end, let me once again extend my gratitude to President Duda for his support and visit to Skopje and wish him a pleasant stay with us.