President Pendarovski at Regional Forum on Good Governance and Fight against Corruption: High-level corruption is one of the biggest security threats for the future of the country 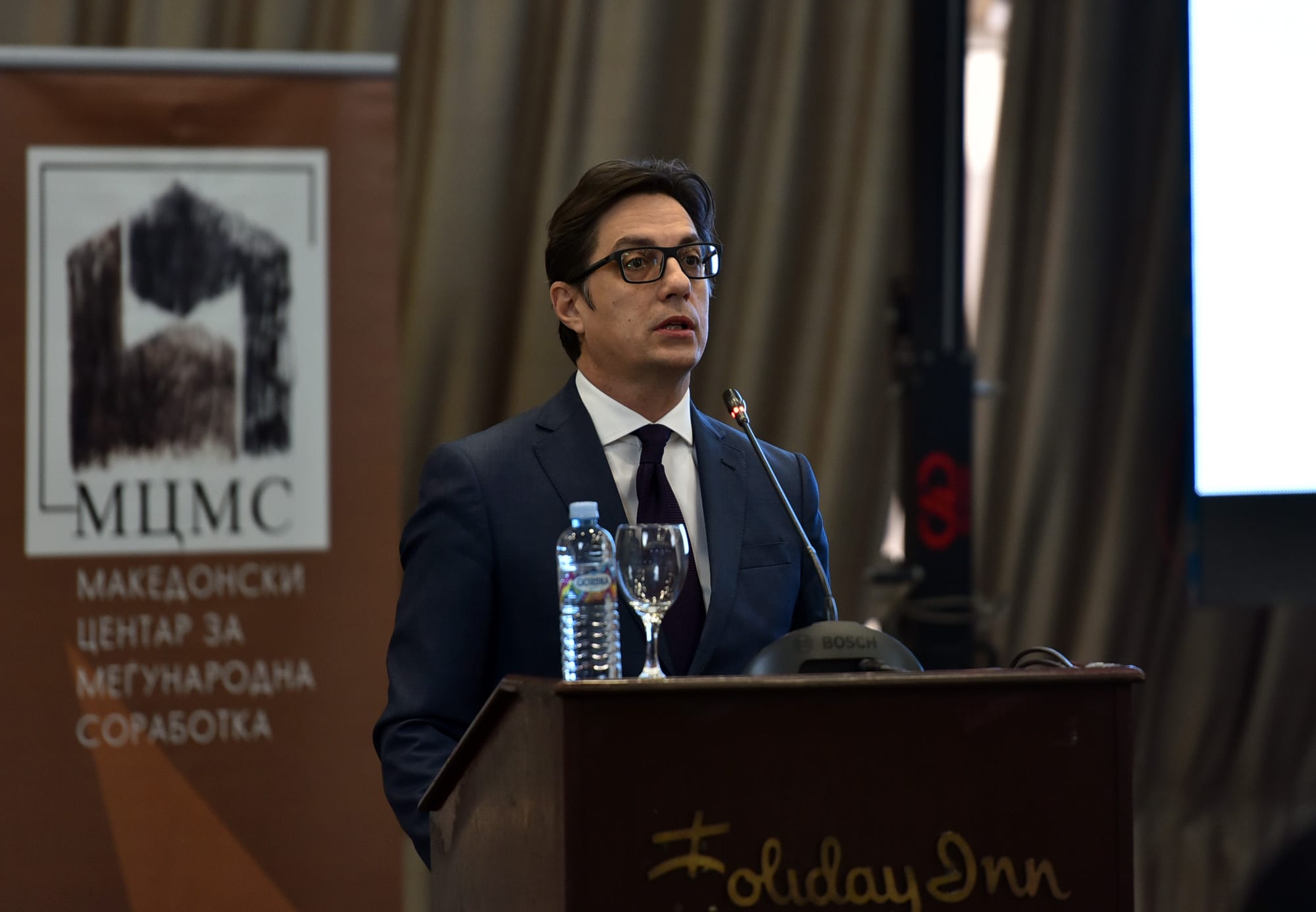 The President of the Republic of North Macedonia, Stevo Pendarovski, addressed today the Regional Forum on Good Governance and Fight against Corruption, jointly organized by the Regional Anti-Corruption Program, funded by the EU and run by the Macedonian Center for International Cooperation (MCIC) and the Project “Strengthening of the CSOs Platform for Fight against Corruption”, supported by the USAID Citizen Participation Project, implemented by Transparency International Macedonia (TI-M).

Speaking at the forum titled “Fulfilling the Promise of EU Enlargement: 30 Years of Good Governance and Anti-Corruption Reforms in Central and Eastern Europe”, President Pendarovski called for cooperation between institutions, the NGO sector, the private sector, because it is one of the successful ways to tackle corruption, as transparency and accountability are based on good governance and the rule of law.

Below is the address of President Pendarovski.

I gladly accepted the invitation to address this forum on good governance and fight against corruption. A few days ago we celebrated the International Day against Corruption when we recalled the pivotal United Nations Convention that points to the negative consequences of corrupt behavior on democracy and the rule of law. The degree of democracy in one state is primarily measured by the ability of the state to ensure consistent respect for and the rule of law. A functioning rule of law is an essential prerequisite for sustainable development of the public order.

It is indisputable that we are constantly adapting the domestic law to the European Union law, which is our strategic goal. But, what is my personal dilemma, and I believe of most of our citizens, is whether state institutions have substantially or only formally adopted and followed European values ​​and principles in this area.

We have been talking for years about the reforms implemented in the judiciary, about building an efficient and equitable system as a guarantee of respect for human rights and freedoms. However, the trust of the citizens in the judicial system is constantly decreasing. There is hardly anyone in our country who has not gone through the maze of courts and has no bad experience in seeking justice. And, when the citizen loses faith in justice, then he loses his strongest link with the state.

We are talking about a non-selective and independent judiciary that will enforce laws professionally, fairly and impartially. On the other hand, we have almost daily court cases that raise doubts, whether in our country the law applies to everyone or maybe the law is reduced to a political instrument, and justice is still being withdrawn before the power of the powerful.

I have been dealing with security issues for many years and I can freely say that in the past 10-15 years in our country the high-level corruption has grown into one of the biggest security threats to the future of the country. Here, I have to single out the so-called “Racket” case that discredited much of our efforts and hopes of tackling crime and high-level corruption. Personally, I did not expect that holders of such important and responsible functions would fail at a given moment. This case remains a litmus test for the rule of law, and thus a test of resistance to political influence by key institutions.

On this occasion, I would like to emphasize that the sincere struggle for the rule of law implies investigating the crimes of the previous, but also the crimes of the current government, and anyone who has broken the law to get appropriate punishment. At the same time, it is very important not to allow through deliberate obsolescence the so-called “hidden amnesty” to occur for perpetrators of high-level corruption offenses.

In this context, I think it is good that there is continuity and that the cases from the former Special Prosecutor’s Office were taken over by the regular prosecution. There is no EU member state telling us that we have to fully investigate that huge scandal involving millions of recordings that have to be resolved, otherwise we cannot expect to be treated as a serious state. The fact is that the most prosperous countries in the world have the lowest levels of corruption. I expect in the coming period this to be the most difficult task we will undertake systematically and seriously once we start negotiating with the European Union.

I am convinced that effective coordination and cooperation between institutions will contribute to reducing corruption, which also means consolidating democracy. Awareness of the existence and proportions of a particular problem is the first step towards finding a solution. The louder the talk, the greater the risk for those who keep it alive. Here, the role of the free and professional media is of paramount importance. In doing so, modern political models of behavior prohibit interference with the work of courts and prosecutors, but they also undoubtedly imply free expression of opinion on all decisions and actions of those authorities at all stages of their proceedings.

Lastly, let me recall the principles of the United Nations Convention against Corruption which point to the gravity of the problems and the threat it poses to stability and security, to democratic and moral values.

We need systematically tackling corruption and establishing a new value system, a precondition of which is the clearly expressed will of the relevant political factors in the country. I will reiterate that the necessary reforms in the field of ​​the rule of law should not be made to meet the criteria for EU membership, but to restore the confidence of the citizens in the institutions and in their own state.

I call for cooperation between the institutions of the system, the non-governmental sector, the private sector, as it is one of the successful ways of dealing corruption. Transparency and accountability are based on good governance and the rule of law.