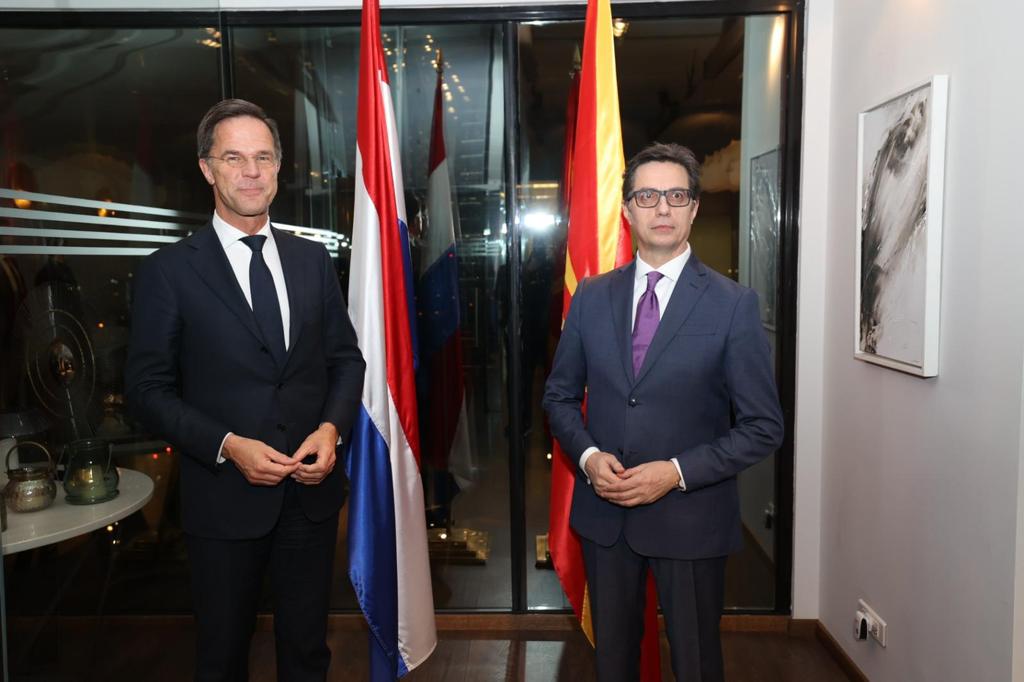 President Stevo Pendarovski hosted a working dinner in honor of the Dutch Prime Minister, Mark Rutte, who is paying a one-day visit to North Macedonia.

The interlocutors exchanged views on the successful bilateral cooperation between North Macedonia and the Netherlands, the country’s prospects in terms of the European integration process, as well as the current developments in the country and the region.

President Pendarovski expressed satisfaction with the intensification of political dialogue between the two countries in the past period, pointing out that the Netherlands is our important partner and proven supporter of our EU integration efforts.

In that regard, the President thanked for the principled support of the Netherlands for the start of accession negotiations for membership in the European Union, emphasizing that North Macedonia is committed to the reform agenda and good neighborly relations in order to start negotiations with the EU immediately.

“Trustworthy tests of the credibility of the enlargement process are the forthcoming European Union councils in December and the possibility for North Macedonia to make a step forward on the road to the EU. Support for unblocking our European integration is extremely important for the stability and prosperity of the entire region and an additional impetus to the reform process”, President Pendarovski said.

Regarding the current situation in the field of democracy, rule of law, fight against crime and corruption and independent judiciary, the President expressed expectation that the Dutch Government will continue to contribute to strengthening North Macedonia as a strong European democracy, free society and free market economy. In this regard, the importance of the Declaration of Partnership and Cooperation signed between the two countries was emphasized, as a solid basis for deepening bilateral ties and further continuous and committed implementation of European standards.

At the meeting, opinions were exchanged on the current political developments in the region.