President Pendarovski meets with the President of the National Council of the Republic of Austria, Wolfgang Sobotka At the meeting, on the eve of marking the 25th anniversary since the establishment of diplomatic relations in December this year, the interlocutors reaffirmed the excellent bilateral relations in many areas of mutual interest and expressed mutual satisfaction with the established excellent cooperation based on mutual trust and understanding at various levels of institutional partnership between the two countries.

President Pendarovski stressed the need to further intensify the cooperation between the parliamentary groups as an important precondition for strengthening overall bilateral relations.

The President expressed satisfaction with Austria’s continued interest and its key role in the overall prosperity and stability of North Macedonia and the entire region of Southeast Europe.

In the context of our European integration, highlighting the long-standing efforts and Austrian support strongly demonstrated during the EU Presidency in the second half of 2018, President Pendarovski said that their principled support is significant in October 2019, when we expect confirmation of our efforts, by bringing a decision to set a date to start accession negotiations. In the meantime, the country is fully committed to the reform agenda and to the creation of good neighborly policy in Southeast Europe, President Pendarovski underlined, stressing that his political activity, both abroad and at home, has one goal, which is membership of the European Union and NATO and completing reforms to ensure the future of the state and the well-being of all its citizens.

Earlier, President Pendarovski was received by the Austrian President Alexander van der Bellen with the highest state and military honors, and met with the Federal Chancellor Brigitte Bierlein. President Stevo Pendarovski met today with Rosana Dudzak, UN Resident Coordinator in the Republic of North Macedonia. At the meeting, Dudzak informed President Pendarovski about the current activities and projects that are being... President Pendarovski meets with representatives of the Association for Cystic Fibrosis 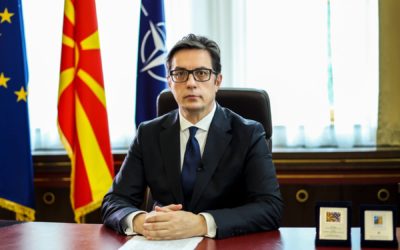 President Stevo Pendarovski addressed today the regional forum via video message: “Non-profit organizations and risk assessment - engagement and lessons learned for effective implementation”, which is co-organized by the Financial Intelligence Office of the Ministry... President Stevo Pendarovski received today the letters of credence of Nevena Jovanovic, the newly appointed Ambassador of the Republic of Serbia to the Republic of North Macedonia. At the ceremony of presenting the credentials,...