President Pendarovski: Our soldiers have shown that they are professionally trained in accordance with the highest NATO standards 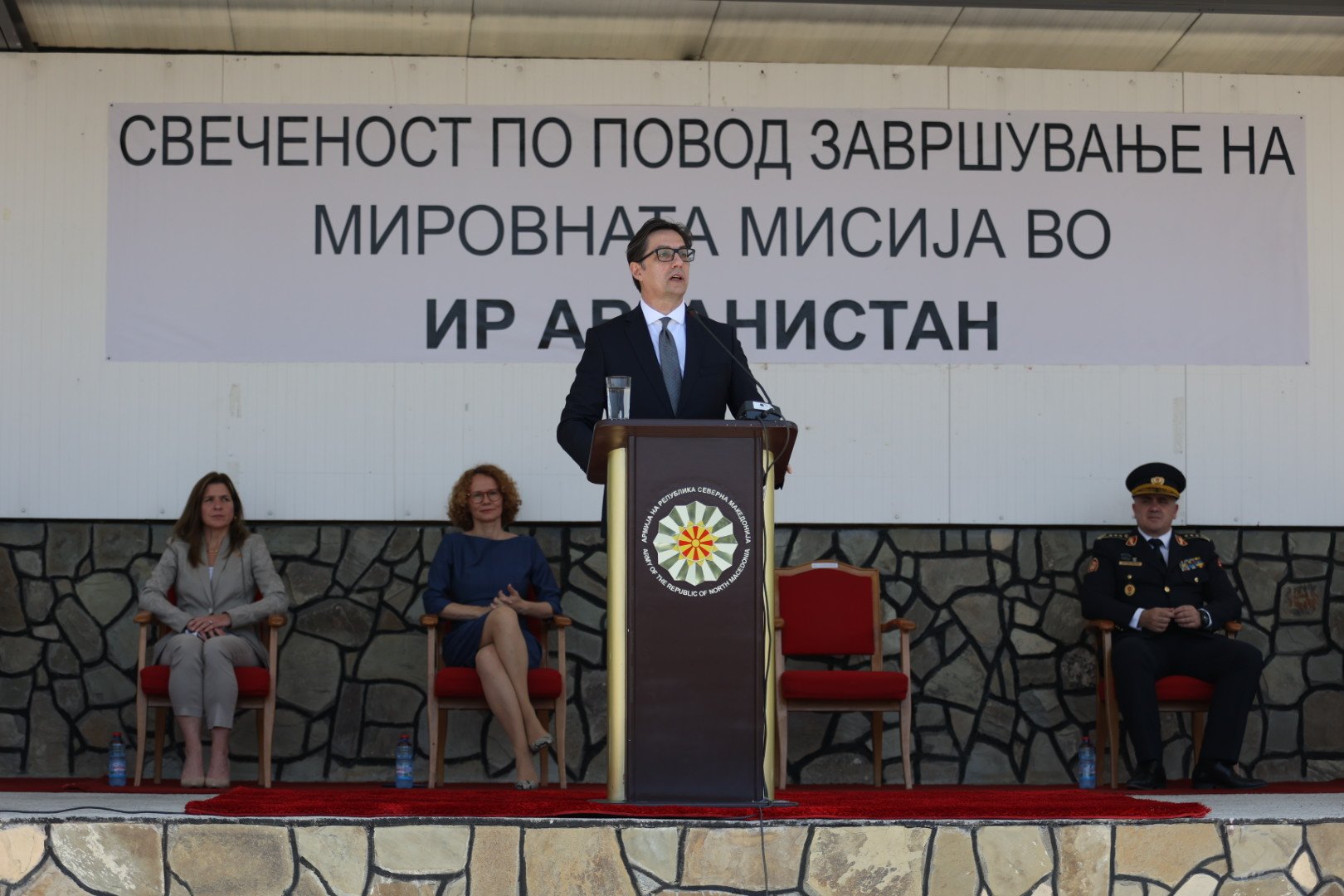 President Stevo Pendarovski addressed today the ceremony held at the Ilinden Barracks in Skopje, on the occasion of the completion of the participation of the Army of the Republic of North Macedonia in the 2002-2021 peacekeeping mission in the Islamic Republic of Afghanistan.

“This peacekeeping mission confirmed that our troops can serve successfully in any peacekeeping mission, that they are trained to the highest professional level and in accordance with the highest NATO standards. Of course, this mission would not have been possible without the support of our then partners, and now allies – the United States, the United Kingdom, Turkey, the Czech Republic, Greece, Norway and Germany”, President Pendarovski said.

Respected soldiers and officers, members of the Army,

As Commander-in-Chief of the Armed Forces, I am honored to be here today at this ceremony marking the return of our last peacekeeping contingent from Afghanistan. First, I want to tell our peacekeepers – welcome home!

Now you and your loved ones can sigh with great relief because you returned home alive and well. You have returned from a mission whose mandate has not been easy at all. Not only is it a challenge to find yourself in an unfamiliar environment, away from home, an even greater challenge is to be in an environment that has been unstable for 20 years, and often dangerous. Therefore, your participation in this peacekeeping operation is even more valuable, and the contribution is not only yours, personal, but also of your families who supported you.

You were there in the service of your country, but also in the service of the people of Afghanistan who should enjoy the same rights that other nations in the world have. Hence, let me express great gratitude, on my personal behalf, but I also believe on behalf of all our citizens.

Almost 30 years ago, when the United Nations peacekeeping force was deployed on our territory, or after the 2001 conflict, when we hosted three NATO operations, it was unthinkable that our troops would one day be part of world peacekeeping missions. But in 2002, that became a reality. From a beneficiary country, we have become an exporter of security. The political decision to send our troops abroad is always one of the most difficult dilemmas that politicians can face, but today, from this perspective, I am convinced that then the right decision was made.

Politicians often disagree on many issues, but when it came to sending our people on peacekeeping missions, the Parliament always made decisions unanimously. We started modestly, sending two staff officers to the International Security Assistance Force; we continued to send larger contingents. We participated in joint formations with peacekeepers from Turkey and the United Kingdom, we sent a contingent as part of the Vermont National Guard from the United States. We had medical teams within the Greek, Czech and Norwegian hospital and with the Adriatic Charter countries.

After the completion of ISAF in 2014, we continued to participate in the new NATO mission, Resolute Support, in which our troops and officers worked together with the forces of the United States, Turkey, the Federal Republic of Germany, the Kingdom of Norway, as well as in A5 format. In both missions, our Army participated with over 3,300 people, of which about 190 were female.

The contingents we are talking about may seem small compared to the total number of troops engaged, which in some periods in Afghanistan was over 150,000, but they are large in relative terms, given that at certain point North Macedonia was fourth in terms of per capita contribution. And the number of more than 3,300 members is almost half of the total number of our Army. The number itself is much more significant if we take into account its structure which has always reflected the ethnic composition of our population and that our soldiers, together with our partners, shared the same values ​​of freedom and democracy.

You represented your country in the best way with your professionalism and dedication. If we, as a state, believe that all people are born free and equal, we cannot be worthy of our words and beliefs if we do not defend those values ​​anywhere in the world where there is a need.

This peacekeeping mission confirmed that our troops can serve successfully in any peacekeeping mission, that they are trained to the highest professional level and in accordance with the highest NATO standards. Of course, this mission would not have been possible without the support of our then partners, and now allies – the United States, the United Kingdom, Turkey, the Czech Republic, Greece, Norway and Germany. Many thanks to them too!

I believe that the experience gained during your engagement in this mission made you not only better soldiers, but also better people. I wish that in the future you continue to represent your homeland, your people and the dignity of our Army in the best possible way, wherever you are.

I also express great gratitude to all peacekeepers around the world, in all international peacekeeping missions, and pay tribute to them for their contribution to a more peaceful and safer world.

Thank you for your attention!