The President of the Republic of North Macedonia, Stevo Pendarovski, received today the Ambassador of the Federal Republic of Germany, Thomas Norbert Gerberich.

President Pendarovski stressed that building friendly relations with Germany, based on sincere and reliable approach, is of exceptional significance for the Republic of North Macedonia, and expressed expectation for their further advancement in the area of economy, security, as well as in other areas of mutual interest.

Regarding the implementation of our strategic goals, President Pendarovski expressed his gratitude for the strong and open commitment of Germany for the start of the accession negotiations of the Republic of North Macedonia with the European Union, as well as for the support for NATO membership.

President Pendarovski said that in the past period North Macedonia took decisive steps to develop good neighborly relations and to fulfill the reform agenda, demonstrating its commitment to the Euro-Atlantic processes.

Setting a date for the start of accession negotiations by the European Council, said President Pendarovski, will positively influence the overall social and political climate in the Republic of North Macedonia and will mean further stabilization of the situation in the region. In that direction, President Pendarovski welcomed the “Berlin Process” initiative, as a concrete contribution by Germany to support Euro-Atlantic integration and regional cooperation with the Balkan countries. Ambassador Gerberich conveyed congratulations to President Pendarovski from the German President, Frank-Walter Steinmeier, on the occasion of assuming of office and wished him success in his work, expressing his assurance that the relations between the two countries will continue to intensify in the coming period.

President Pendarovski from the Macedonian Language Institute “Krste Misirkov”: The scientific arguments and the truth are on our side and no reasonable person can give them up

President Stevo Pendarovski addressed today the opening of the manifestation Open Days at the Macedonian Language Institute “Krste Misirkov”. This year’s event is held in honor of the 75th anniversary of the formalization of the modern Macedonian language,... 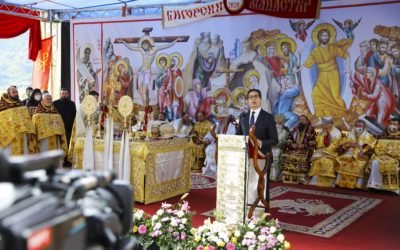 President Pendarovski at the celebration of the 1000th anniversary of the founding of the Bigorski Monastery “St. John the Baptist”

The Wife of the President, Elizabeta Gjorgievska, addressed the opening of the third edition of the “Civil Society Day” festival, organized by the program of the Swiss Embassy for Civil Society Support, Civica Mobilitas, implemented by NIRAS-Denmark and the Macedonian... 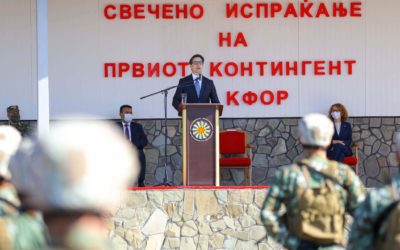