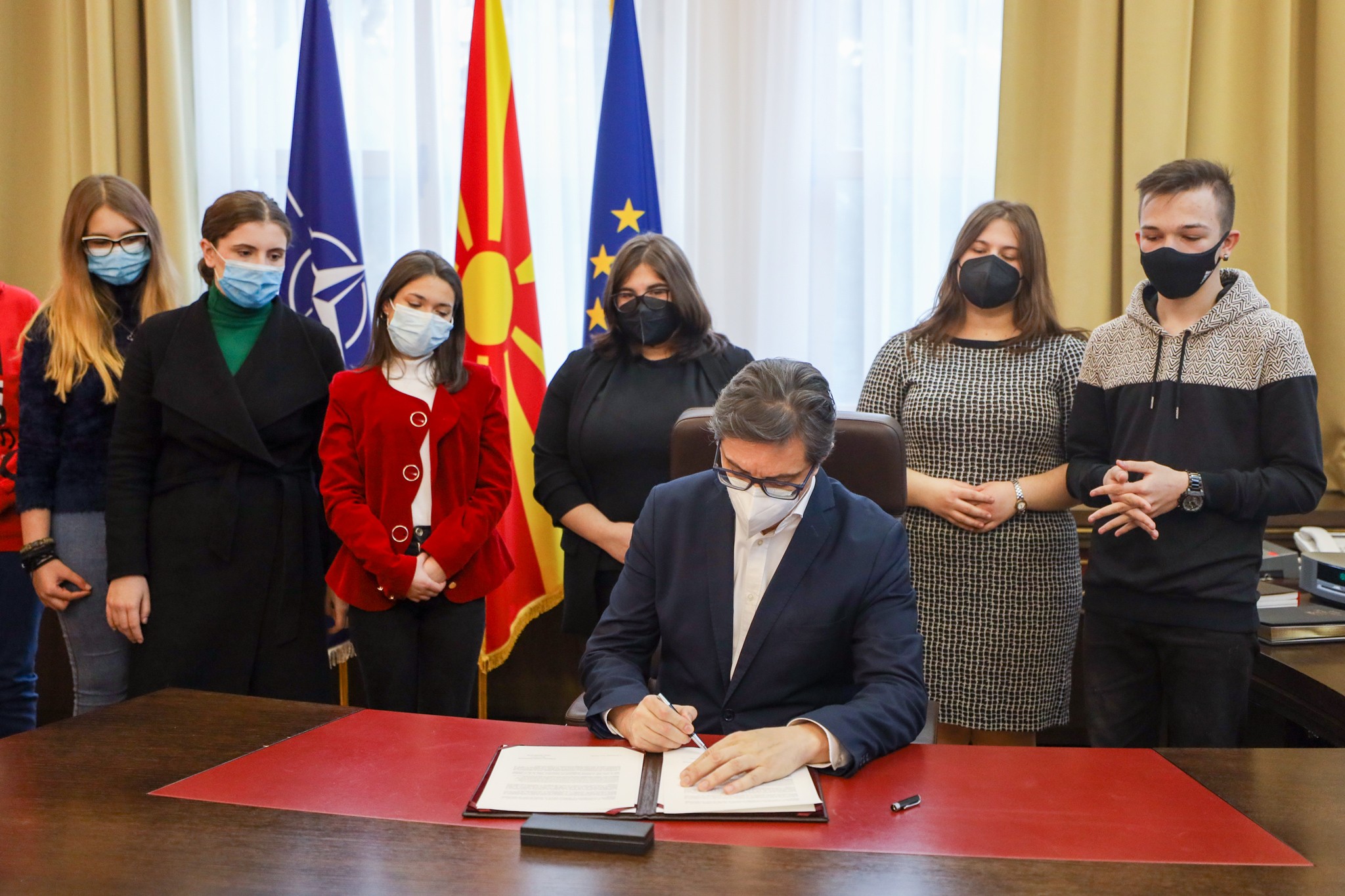 President Stevo Pendarovski signed today the Declaration on Children, Youth and Climate Action, in the presence of young activists participating in the Youth Summit on Climate Change in Skopje, the Minister of Environment and Physical Planning, Naser Nuredini, and the UNICEF Representative in North Macedonia, Patrizia DiGiovanni.

On the occasion of the signing of the Declaration, the Cabinet organized a thematic debate which discussed the obligations arising from this year’s COP26 Climate Change Summit in Glasgow, the ongoing activities undertaken by the Ministry of Environment and Physical Planning, and the next steps. at the national level. The young activists discussed the possibilities for their wider involvement in the decision-making process and the creation of climate change policies and expressed interest in the measures taken to protect forests, reduce and prevent waste and improve air quality.

President Pendarovski welcomed the enthusiasm of young people and stressed that this Declaration reminds us that one of the main motives for dealing with climate change is children and young people, i.e. their right to a safe climate and a healthy environment. “We must create space for young people as the most informed and digitized generation to be involved in tackling environmental issues and expressing their views on climate policy”, he said, adding that raising public awareness and educating young people is particularly important, which requires integration of the climatic and ecological aspects in the National Education Strategy, i.e. in the curricula.

Minister Nuredini shared the national climate ambitions and encouraged young people to actively participate in the adoption of the first Law on Climate Action, which will legally pave the path to carbon neutrality in the country. The Minister also called on young people to be active and loud to be heard, recognizing them as a driving and motivating force for building a climate-resistant state.

Welcoming the signing of the Declaration, the UNICEF Representative, Patrizia DiGiovanni noted that the document reflects the countries’ commitment to taking into account the needs, rights and perspectives of children in climate change policies at all levels.

“The signing of the Declaration is an important moment following the Youth Summit on Climate Change, where we heard young people, their concerns and calls for action for environmental protection. At the same time, it shows the enormous capacity of children and young people to be powerful agents of change”, DiGiovanni said, adding that climate crisis is a crisis of the children’s rights.

North Macedonia has joined the thirty European countries-signatories to the Declaration on Children, Youth and Climate Action, which was adopted at the Madrid Climate Change Summit in 2019.

One of the goals of the Declaration is to increase the participation of children and young people in the processes of climate change mitigation and adaptation, through greater education on climate change and the environment, as well as the acquisition of knowledge and skills needed to protect themselves and contribute to a secure and sustainable future.

During the visit to the Cabinet, within the Open Cabinet program, the young activists were introduced to the history of the building, some of the activities that are being implemented, as well as the way of functioning of this institution. At the same time, they had the opportunity to visit the premises where the official and working meetings take place, as well as the halls for ceremonies, meetings, events and press conferences.