President Pendarovski: The first year of our NATO membership confirms that we are not alone in dealing with the challenges 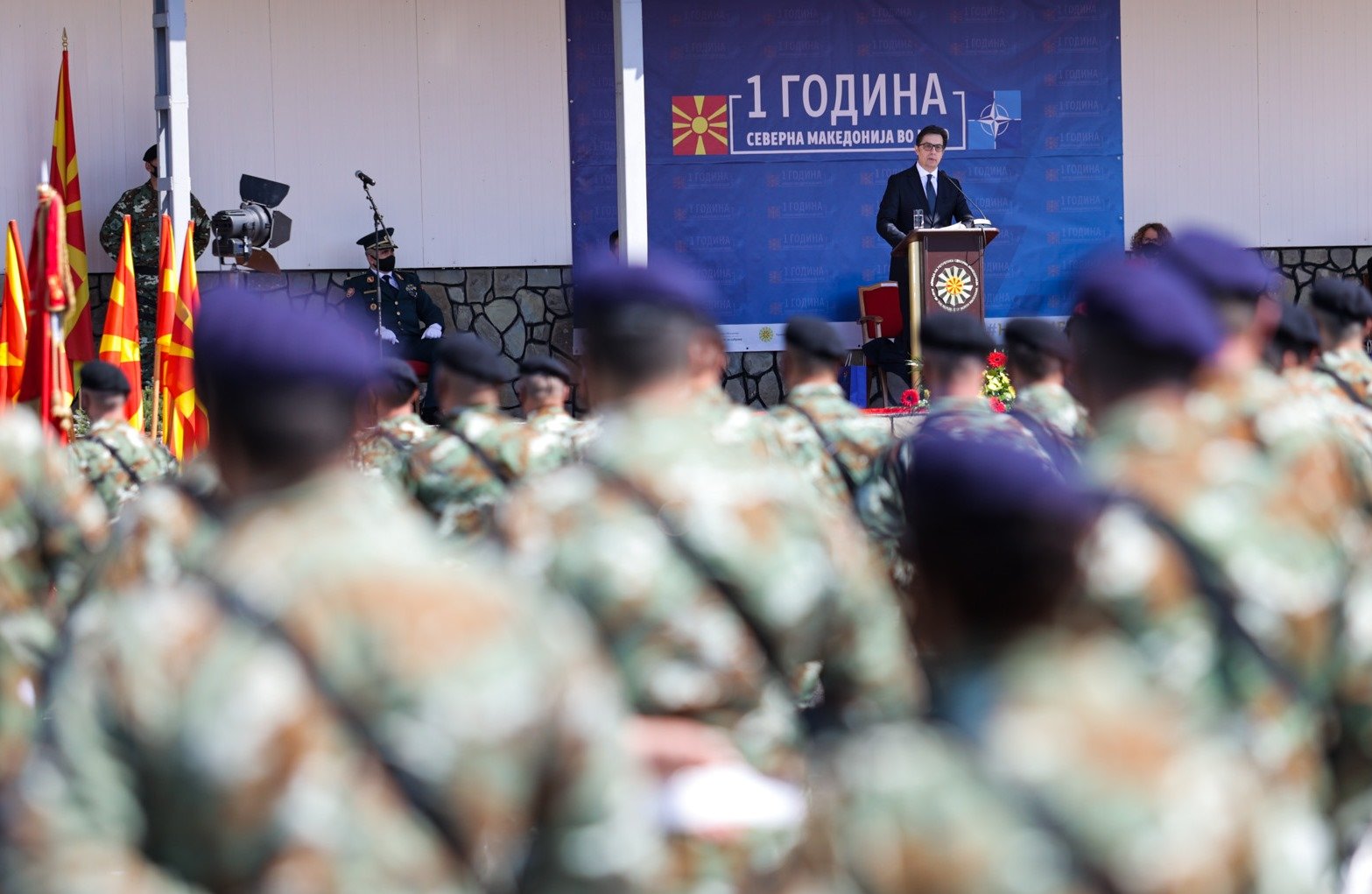 President Stevo Pendarovski addressed today the central ceremony marking the first anniversary of the membership of the Republic of North Macedonia in the NATO Alliance, which was held at the Ilinden Barracks in Skopje.

“For a year now, we have been participating in all working committees and bodies and we have been adopting strategic decisions. Being a full-fledged member, we have full access to the most relevant information that is at disposal to the Alliance. This information exchange mechanism helps us to prevent danger and to be better informed in the policy-making processes while adopting decisions for vital security and foreign-political issues. At the same time, we are part of the coordinative mechanisms of NATO for dealing with hybrid threats and the campaigns for countering disinformation”, President Pendarovski said in his address.

Regarding the pandemic, President Pendarovski said that NATO was and still is committed to preventing the health crisis from turning into a security crisis. “From the very beginning NATO used its solidarity mechanisms to offer necessary medical equipment and materials, but also shared its knowledge and experience”, the President added.

During the ceremony, the units of the Army of the Republic of North Macedonia demonstrated their capabilities and were awarded recognitions for the current cooperation with foreign Military Attachés in the country.

Those present at the ceremony observed a minute of silence in honor of the fallen and deceased members of the Army and the victims of Covid-19.

Precisely one year ago we became a full-fledged member of the North-Atlantic Alliance. The road to membership was long and burdensome; we were waiting for 20 years, more than all candidates in the history of the organization. However, despite all postponements, we did not give up because this has been and remains our key strategic goal since the independence until today.
This crowned the efforts of several parliamentary compositions and governments and we materialized the support which was continuously provided by the majority of Macedonian citizens.
Even before becoming members we shared the values and principles of the Alliance. We implemented reforms in defence, we tested ourselves on joint military exercises, we took participation in risky peace-keeping missions and thus, we actively contributed to our own, but also to the joint security.

While doing so, we were fully aware of a single truth: NATO membership was not a guarantee that we will no longer face challenges because they are inevitable for any country in the world. However, the membership is a guarantee that we will not face these challenges alone and that our readiness to resist and to defend will multiply. Our first year of membership confirmed this.
The pandemics which started as a health-related crisis very soon became an economic, social and environmental crisis. The world and we have suffered immeasurable human and enormous material damage. It is still very much early to speak of the long-term consequences arising from this misfortune. And yet, one thing is obvious – the whole world is living in an era of exceptional unpredictability. There is constant change in the number and intensity, but also the form of the security risks and hybrid threats that are becoming more and more complex to manage even for the most powerful countries.

And this shows the advantaged of the NATO membership. Namely, most of the problems that we, as a country, have been facing before the pandemics and before the membership, did not disappear and yet, they became easier to tackle.

Today, above us, as a symbol of our connection, we can see NATO’s military airplanes that are part of the air patrols and protection of our sky that is part of the shared Euro-Atlantic territory – subject of collective protection.

For a year now we have been participating in all working committees and bodies and we have been adopting strategic decisions. Being a full-fledged member, we have full access to the most relevant information that is at disposal to the Alliance. This information exchange mechanism helps us to prevent danger and to be better informed in the policy-making processes while adopting decisions for vital security and foreign-political issues. At the same time, we are part of the coordinative mechanisms of NATO for dealing with hybrid threats and the campaigns for countering disinformation.
With regards to the pandemic, NATO was and still remains engaged to keep the health crisis from becoming a security one. From the very beginning NATO used its solidarity mechanisms to offer necessary medical equipment and materials, but also selflessly shared its knowledge and experience.

During this time of global uncertainty and geo-political tensions, NATO remains an important stabilizing factor for North Macedonia. However, this support and solidarity is mutual. On our territory, in times of crisis and state of emergency, we engaged the Army to provide support to the Ministry of Health, the Ministry of Interior and the local self-government units.
We continue our participation in the peace-keeping missions. At the moment we have representatives of the Army who are part of the “Resolute Support” mission in Afghanistan. In November 2020, for the first time, we became part of the KFOR mission in Kosovo, thus starting to actively and directly contribute to the regional stability.

In order to improve the resilience of the country against the new and old threats, we continue to invest in modernizing and development of the Army. In that regard there is a consensus between the President and the Government for a precise timeframe during which we are to reach our goal for securing 2% of the GDP for defence and we intend to keep our promise.

At the same time, in order to become ready for post-Covid world, it is equally important to nurture the fundamental values of the Alliance of the Western states – freedom, democracy and rule of law which are the basic preconditions for economic and social development.

Although we are celebrating this year’s anniversary in extraordinary circumstances, with serious collective damage and numerous personal tragedies, we must not forget the true importance of this day.

Our first year as NATO members was at the same time one of the most difficult years known to the recent world history. However, we are not facing these challenges alone – we have 29 countries, 29 democracies, 29 powerful armies, 29 friends who will remain with us for better or for worse.

In the very end, I wish that we celebrate all future anniversaries and jubilees of the Macedonian membership into NATO in a more peaceful and more secure environment.