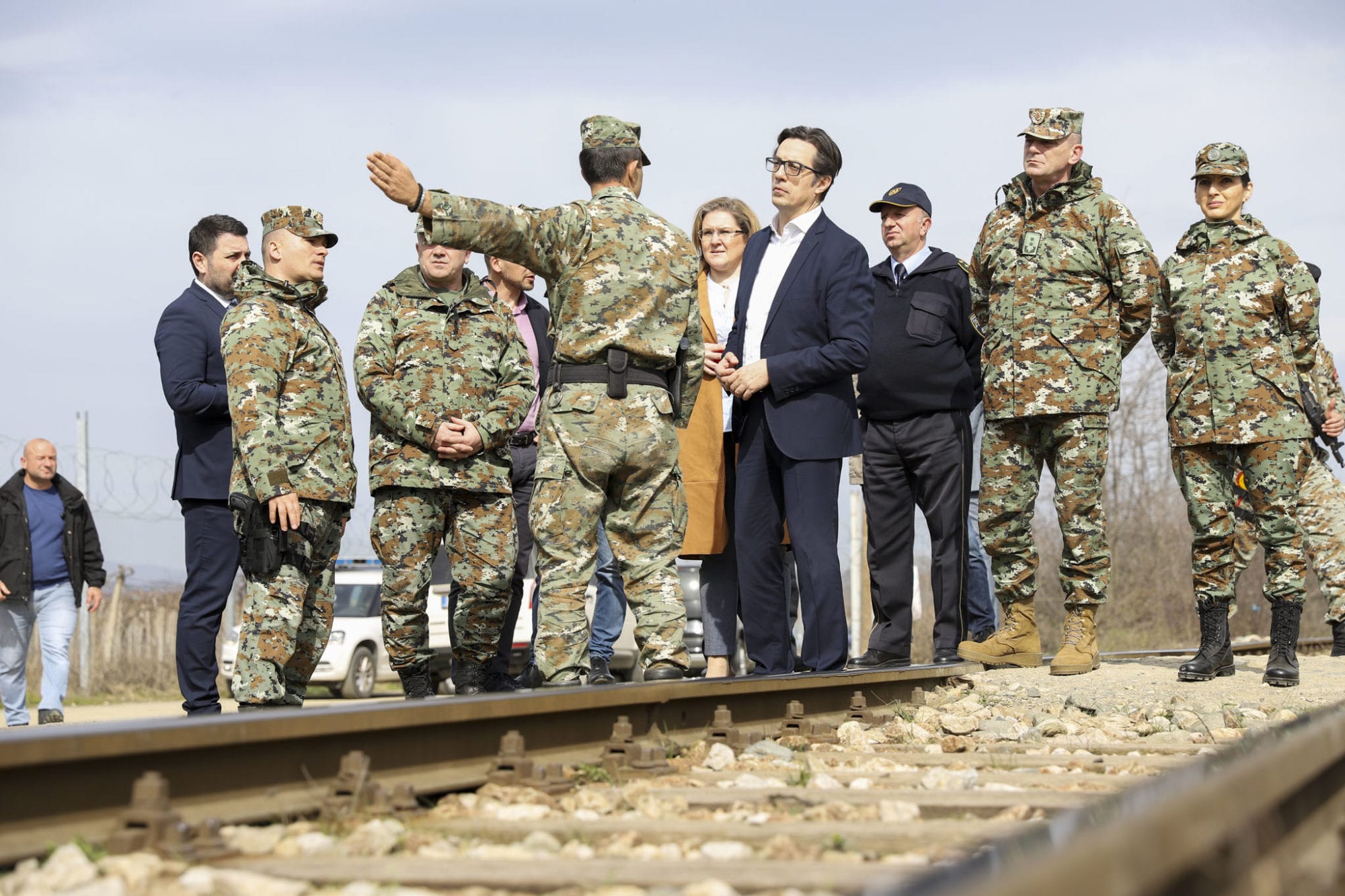 The President of the Republic of North Macedonia and Commander-in-Chief of the Armed Forces, Stevo Pendarovski, toured today the Army positions stationed on the southern border of the country.

At the “Goce Delchev” watchtower at the Bogorodica border crossing point, President Pendarovski talked to the soldiers about their responsibilities in the border area, the manner and period of their rotation.

The Brigade Commander briefed President Pendarovski on the work of the Army members in the “Goce Delchev” watchtower and in the other watchtowers in the border towns on the southern border line of the country.

“The state authorities are monitoring the situation here on a daily basis, we also have daily exchanges with partner offices, there are practically daily meetings of the Steering Committee at the Crisis Management Center where each competent institution has its own representative, including the Cabinet of the President. A new body for coordination of the services has recently been activated by law, which also makes daily assessments, daily analyzes. As of two days, I can tell you that we have increased the army contingent here as well; I cannot tell numbers because it is classified information, but we have increased it. Not expecting a big refugee wave, but expecting something that might happen, yet we must be prepared. I am sure that the same refers to the units of the Ministry of Interior”, President Pendarovski said.

Moreover, as President Pendarovski added, migrant pressure is now on the Turkish-Greek border and that the wave of refugees resembles the one in 2015 and 2016.

“We are part of a wider, let me call it, range of countries that have to be prepared, even as a transit zone, but it is clear that the experience of 2015 and 2016 is immense and valuable in that regard. Even if there is an eventual influx, I assure you that all competent authorities are here and are awake, analyzing and exchanging information so that I cannot practically see a situation in which we will be surprised. If we could finish the 2015/16 crisis management with the highest marks, with a transit of over one million and three hundred thousand people across our territory, hopefully we will not face such a situation again now, as we are ready; I repeat we cannot do it ourselves but with excellent cooperation with the Partner countries within the NATO Alliance, and of course with our neighbor Greece”, President Pendarovski concluded.

While at the southern border, President Pendarovski visited the Vinojug – Gevgelija Transit Center, where migrants coming from Greece enter North Macedonia. Officials at the Transit Center informed President Pendarovski that the Center is fully prepared for reception and temporary stay of migrants. Currently, only one family from Afghanistan resides in the Center. According to the officials, the Transit Center also has a humanitarian character, i.e. it cares for people with socially disadvantaged status. Representatives of the Red Cross, UNHCR and doctors are continuously in the Center to provide the necessary assistance and support to persons temporarily accommodated here.

President Pendarovski also visited point 59 on the southern border, i.e. at the border crossing between North Macedonia and Greece. In the last migrant wave in 2015 and 2016 at this place beside the railway line was the largest influx of refugees.