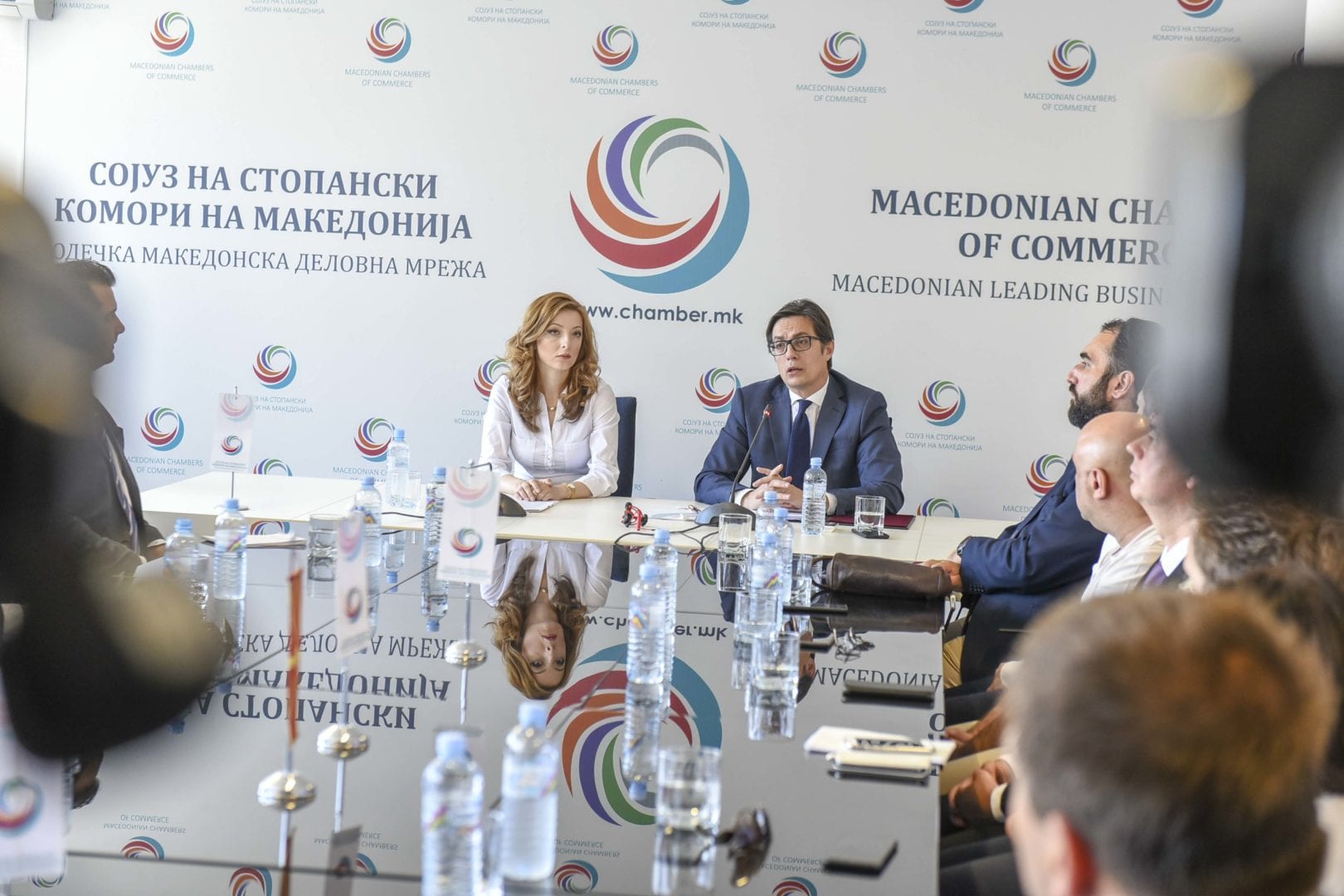 The President of the Republic of North Macedonia, Mr. Stevo Pendarovski, visited today the Macedonian Chamber of Commerce.

At the meeting with the businessmen, President Pendarovski referred to several important things, which, as he stressed, require an agreement and a consensus, and above all, we should all work on improving the environment for the companies.

“Unfortunately, in the past years and decades, we, the politicians, did not help you in that regard. I do not exclude myself from that category of people because I am over 20 years active in public life, although I am a President for only 2 month. If I can in a way apologize in the name of all previous generations of politicians who have not made your life and business easier, so that we all can be more comfortable, I will do it right here. At least in my personal name. I really think in the past 30 years as an independent state, politics did everything, through this polarization and in many other ways, to hinder the business or, even more tragically, to put it under its control. Business under political management is effective only for those who manage it, not for the people, not for the citizens. I hope that in the last two years there are positive steps in the opposite direction, that business should gradually be freed from the political clutches”, the President said.

President Pendarovski also referred to the big affair of the last ten days.

“Recently, we witnessed a major affair and much speculation, which obviously goes through many layers of our society, economic, criminal and political, unfortunately. I do not see political pressure from this position if I say that I insist the state bodies in that so-called situation or case “Racket” to do their work as soon as possible, to the end, really to the end, so as not to leave even the slightest suspicion that someone protects or that some bad practices from the past are recycled, when certain political factors were protecting businesses, i.e. protected criminal businesses, which led us to this situation. So, in its report in 2017, the European Commission defined us as a captured state, namely mostly due to political polarization, but also because it was unclear who could get engaged in business at all”, President Pendarovski said.

He said he completed the economic team a few days ago to help him strengthen the economic aspect of foreign relations and diplomacy, which has been neglected since the beginning of our independence, when traveling abroad. The President said he will insist on engaging the economic ministers, regardless of who is in power, and to receive information about the situation and the requirements from the business sector. He said that the President’s task is to reduce polarization and division in the country.

“My task, because I am paid by your money, is to try to do it by the end of the term and there is no vanity, no harm. I have to call those people who are actors on the political scene with whom I have never had communication, who are important for the overall ambience, to try to get them. And I will ask them and be convinced that I will do everything to reduce those tensions, because I think that at least for a few things that are strategically important for the state, we should not argue”, President Pendarovski said, pointing out our strategic priorities, the economic development, full integration into the EU and NATO and interethnic relations.

“North Macedonia must be fully integrated into the Euro-Atlantic structures. NATO membership is important as a prerequisite for security, for economic development. Here, parties must not have differences. Our integration or accession to NATO is at a satisfactory pace. We have a very positive announcement from the US Senate that in the next two months we can complete that ratification of the practically key state in the Alliance and in the beginning of December we become a full member. This is important because in that way, by definition, the same moment, the environment for doing business becomes predictable. And in relation to the European Union, all efforts and public statements are that we will get a date for negotiations by the end of the year, as planned. To finish as soon as possible those negotiations with the European Union and through the negotiations to make the country better, of course, richer”, President Pendarovski said.

The President clearly indicated that he would not sign a single decree of law if the business community thinks it is not in their interest and in the interest of the citizens. It is important, he said, to give young people the chance for their first employment in the country.

Talks have been started with the Government for new diplomatic representatives, because, at present, in 27 countries there is still no one appointed as head of the diplomatic consular office of the state. The President underlined that high politics should give way to people who understand economy.

The President pointed out that there are no open issues with the neighbors, after the two signed agreements, and that the next year would be a peaceful year. Regardless of the information, the President said, we will not go back to divisions and quarrels, and there are no indications that we are entering new security threats and risks.