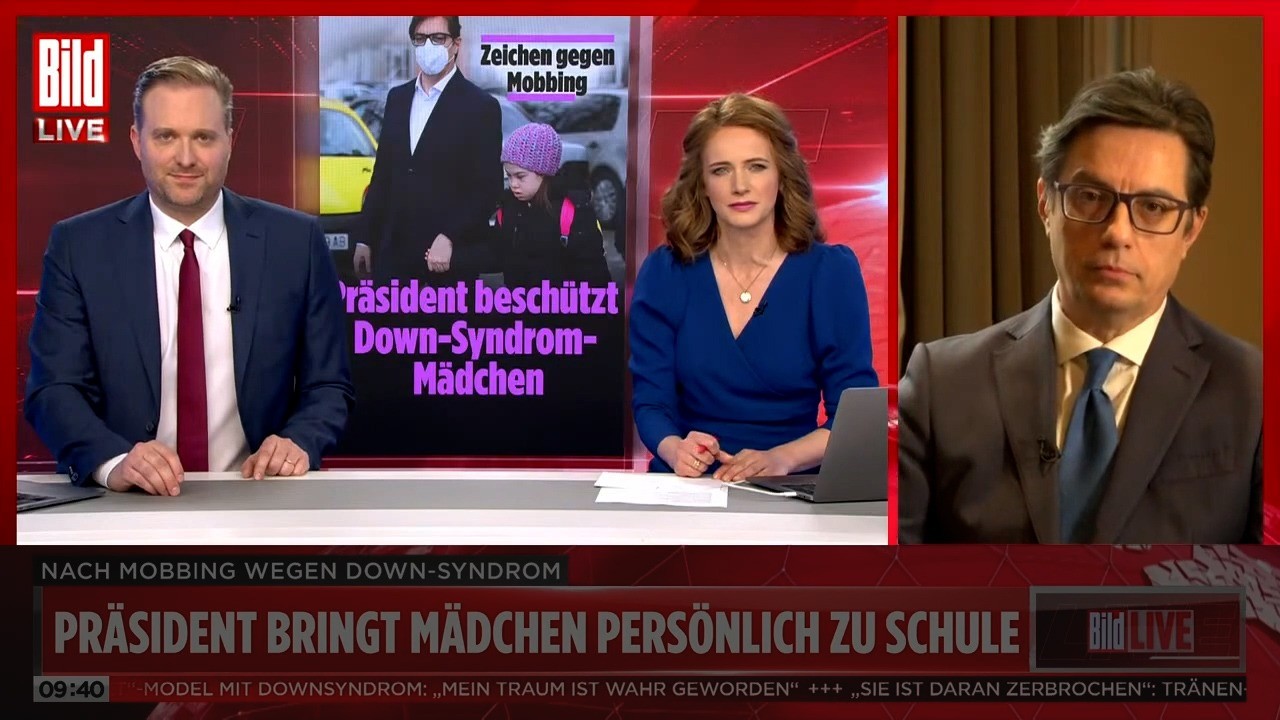 President Stevo Pendarovski was a guest in the German “Bild” program discussing the public support he gave to Embla Ademi, a girl with Down syndrome who was a victim of discrimination due to her disability.

Below is a transcript of the interview:

Touching gesture against mobbing: President personally accompanies a girl to school who is a victim of mobbing due to Down syndrome

A touching gesture of the President of North Macedonia, Stevo Pendarovski. Because of mobbing at school on a child with Down syndrome, he personally accompanies the girl to school and thus raises awareness of the fight against mobbing and awareness of inclusion.

11-year-old Embla has Down syndrome, which is why she is harassed and teased at school, not only by the students. Some parents want her to be excluded from classes.

After President Pendarovski found out about the case, he made a gesture to support the girl and her family. Namely, he visits the girl in her hometown Gostivar, which is located in the northwestern part of the country, and he personally accompanies her to school.

After arriving at the school, he stressed that all people in North Macedonia are equal.

“We must raise our awareness that people with disabilities are part of us and we must not reject them.”

In the meantime, Embla can return to her classroom and attend classes with the other students. In order to ensure this in the future, the girl was given a personal assistant.

Host: “Stevo Pendarovski, President of North Macedonia, who did this because he wants to be an example for those people who rejected Embla. He is now exclusively with us and we will talk about this wonderful gesture. We are glad to have you with us.”

Host: “You are a father, too. I do not want to ask you only as a politician but also as a father, as a person. What was on your mind after hearing about Embla?”

President Stevo Pendarovski: “Good morning! To be honest, I was really shocked to hear about this case. I read the news in a local media. As I mentioned, I was really stunned. Now I speak as a father, as a person, and above all, as an ordinary man. You know, it is not my constitutional obligation to do that, but it was definitely my moral obligation as a person. That was the driving force behind my actions.”

Host: “What do you think, what did you achieve with it? You have certainly shown that you can be an example. But what did you achieve especially with the parents who signed a petition that this girl should not go to school. Did you notice that they changed their thinking? Did you talk to them?”

President Stevo Pendarovski: “I talked to many; I saw many reactions from around the world, and in fact that was the strongest message. And that is exactly the message we can send to the people of the world, not only in North Macedonia. These kinds of problems may be solved on an individual basis, but in general, we see such problems everywhere – not only in my country, but in your country and everywhere in the world. Here, too, problems cannot be solved by one action. A solution must indeed be found by all of us being active together – the state institutions and the relevant staff, because there are really many big problems in this area, and there are so many more stigmas that follow these people.”

President Stevo Pendarovski: “It is a very difficult situation for her. This young girl has little difficulty speaking and it is difficult for her to understand what is being said to her. So, you can explain that kind of emotions to her through gestures, for example. And the most important thing for me and everyone around her was that she really had a smile on her face again.”
Host: “She has a smile on her face again, Embla. You succeeded. I can assume that the moment the President comes to accompany her, then everything is fine at school, but after a while the President leaves. Will mobbing happen again then? If so, are her parents allowed to contact you again?”

President Stevo Pendarovski: “So far, I have not received such information or the people who work in my Cabinet. But I believe that the problem is solved for now. If not, of course I will go to the city of Gostivar again and talk to all the people around her – from the school to her neighbors. Such a thing must not happen again, not only against her, but also against all the people in our country.”

Host: “Says Stevo Pendarovski, President of North Macedonia, who accompanied young Embla to school after she was mobbed and rejected, and as a result, she could no longer attend classes. Thank you very much for talking to us on this topic!”

President Stevo Pendarovski: “Thank you, too!”