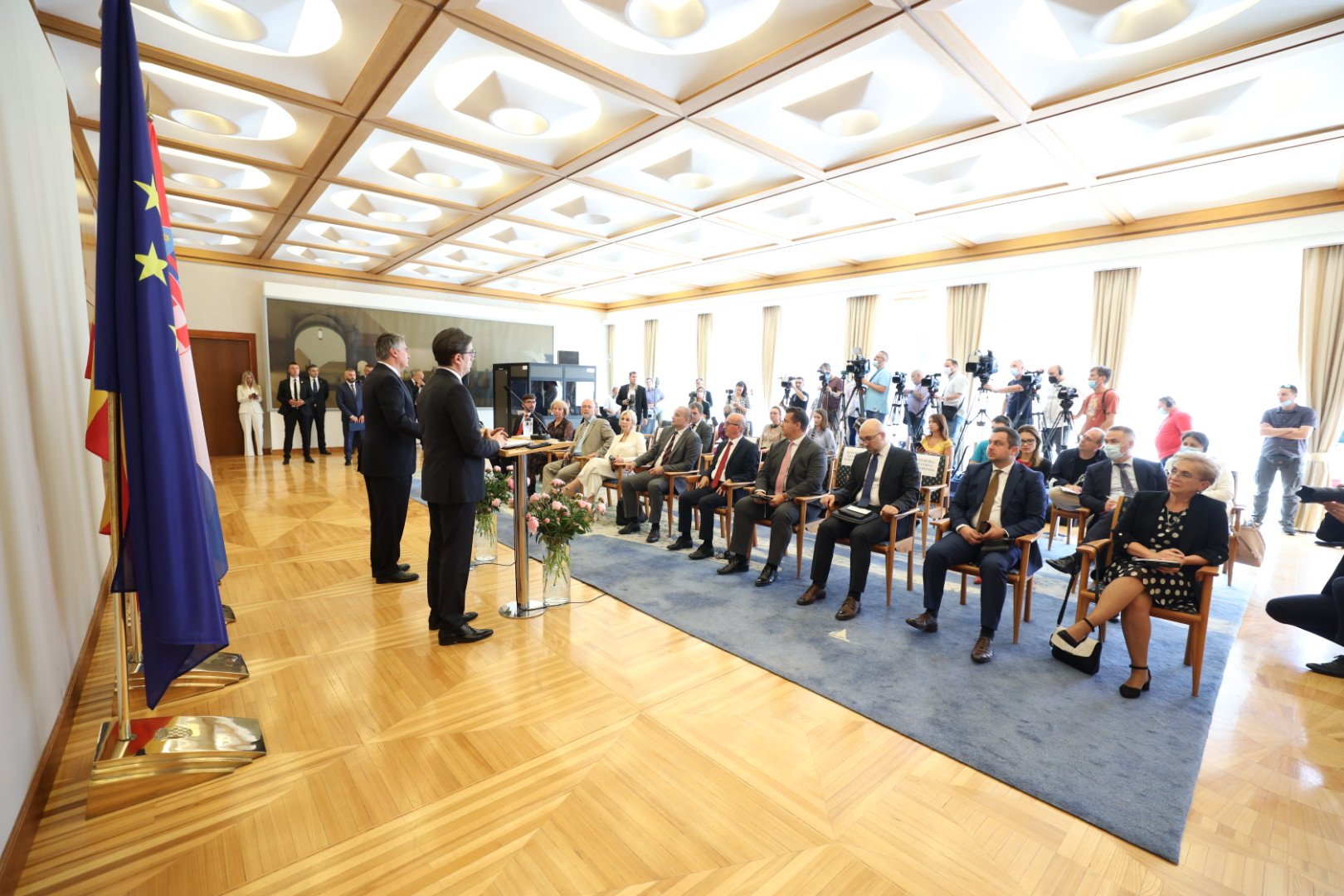 The integral statement of President Pendarovski is below.

I am honored to have the opportunity to pay an official visit to the Republic of Croatia and to discuss topics of common interest with President Milanovic and other representatives of the Croatian political leadership.

Our two countries and our citizens are linked by deep historical and cultural ties. We are close in geography, similar in language, culture, but also in mentality, worldview and values. Throughout history, Croatia has had a special role and significance for us. Exactly here in Zagreb, exactly 160 years ago, the collection of folk songs of the Miladinov Brothers was printed under the auspices of the Croatian Bishop Strossmayer, which is the most important work of our revival. This Collection is a herald of another major work that was again published here in Croatia, in Samobor, one of the first collections of poems written in Macedonian, the book “White Dawns” by Kosta Solev Racin, one of the founders of contemporary Macedonian literature.

Based on the rich tradition of close relations, we also build intensive cooperation in the present because we have an identical vision for the future. Croatia is one of the biggest supporters of the European integration of the Republic of North Macedonia. Croatia’s support is a result of its belief in the pillars of the European Union and its basic principles, which, unfortunately, have been questioned lately.

I would like to repeat what I said in the talks with the Croatian President. We are grateful to the Republic of Croatia for its sincere support, as well as for its responsibility for a peaceful and prosperous Balkans in a united Europe. Here in Zagreb, I would like to emphasize once again that for us there is no other viable alternative than full membership in the European Union and for that purpose we continue to work with undiminished intensity. Of course, our will and effort alone will not suffice to get there.

In a modern world that is not immune to geopolitical conflicts, economic and health crises, every country strives to provide its citizens with security, safety and prosperity. But without cooperation between the states, that would be impossible. To use the capital we have in bilateral relations, to develop economic and trade cooperation and cooperation in other areas such as tourism, infrastructure, science.

To that end, there are representatives in my delegation of the business community, who will make contacts with the people from the Croatian business community and will discuss specific projects and solutions. The opening of the Cultural Information Center of North Macedonia in Zagreb, which will open new spaces for cultural exchange, is a major investment in the already excellent cultural ties between our two countries.

An important taking point we discussed with President Milanovic was the position of the Macedonian community in Croatia and the Croatian community in North Macedonia. Objectively, the rights of minorities in both countries are at a fairly high level, although there is full readiness on both sides for their further promotion.

In conclusion, let me once again thank my host, President Milanovic, for the invitation and the warm welcome here in Zagreb. I hope that in the near future I will have the opportunity to return the hospitality in Skopje.