President Pendarovski at the press conference with Kosovo President Osmani: We are ready to contribute to an infrastructure advanced and economically prosperous region 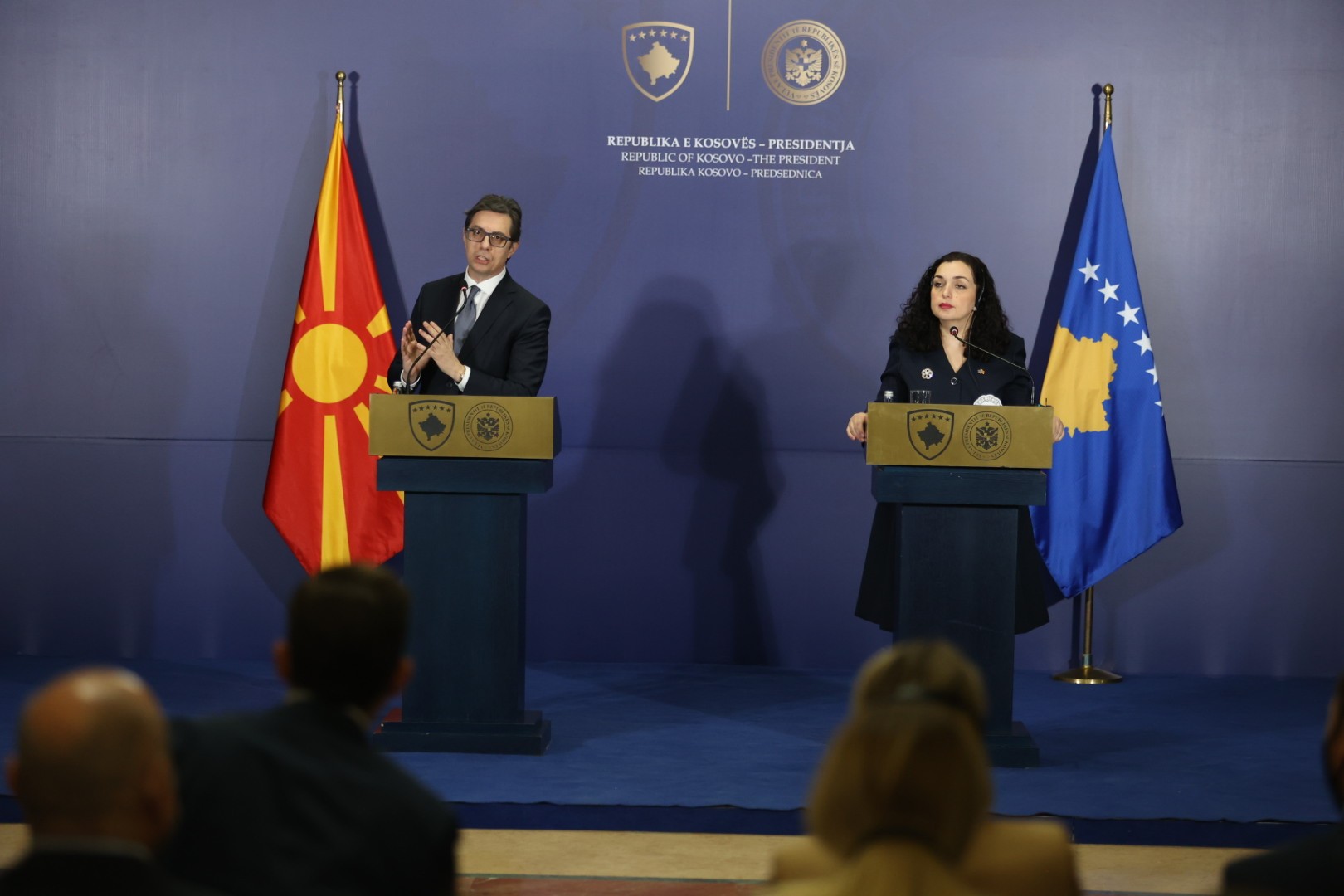 During the official visit, President Pendarovski had a tete-a-tete meeting with President Osmani-Sadriu, followed by a plenary meeting of the Macedonian and Kosovo delegations and a joint press conference by the two presidents.

Let me first thank you for the invitation and the hospitality that the President of Kosovo, Vjosa Osmani, showed me today.

North Macedonia and the Republic of Kosovo, as direct neighbors, are naturally directed to cooperate. This fact is recognized by all political factors in both countries, and, during the talks, I emphasized my readiness to intensify the dialogue at the highest political level.

Today, we had honest and constructive dialogue with President Osmani. These are two friendly countries, committed to taking advantage of opportunities to strengthen bilateral cooperation in all areas. North Macedonia and Kosovo are also important trade partners. Recently, the first joint session of the governments of the two countries was held in Skopje, during which 11 bilateral agreements were signed. I expect their implementation to mean improvement of economic ties and concrete benefit for our citizens.

In terms of foreign policy, we share common strategic goals. North Macedonia supports the Euro-Atlantic aspirations of Kosovo and in that context we are available to share our experiences, both on the road to the EU and in terms of aspirations for NATO integration. Membership in these two organizations means further stabilization and prosperity for the region.

An extremely important component on this road is regional cooperation. We are ready to continue to actively contribute in order to have an infrastructure advanced and economically prosperous region, and in that sense we support Kosovo’s accession to existing regional initiatives and forums.

Of course, with the President of Kosovo, we talked about the Pristina-Belgrade dialogue. We are all aware that this is a very difficult and complicated process, but I believe that all people of good will in the region and beyond will support the resolution of the dispute, which will ultimately mean irreversible pacification of the region.

On this occasion, let me reaffirm our position that North Macedonia supports a mutually acceptable solution between Belgrade and Pristina, with the potential to contribute to regional stability, which will not endanger the security of neighboring countries. In that regard, we welcome the agreement reached to de-escalate tensions in northern Kosovo reached through the mediation of the European Union.

In this context, I would like to state that dialogue is the only mechanism through which, after the break-up of the former Yugoslavia, the countries of the region have managed to make progress in many fields. Therefore, as a country, we support the efforts of our European and American allies to find solutions to open issues.

Thank you once again; I hope that in the interest of good neighborly relations, our bilateral cooperation will be even more intense in the years to come.