President Pendarovski meets with the President of the Hellenic Republic, Katerina Sakellaropoulou 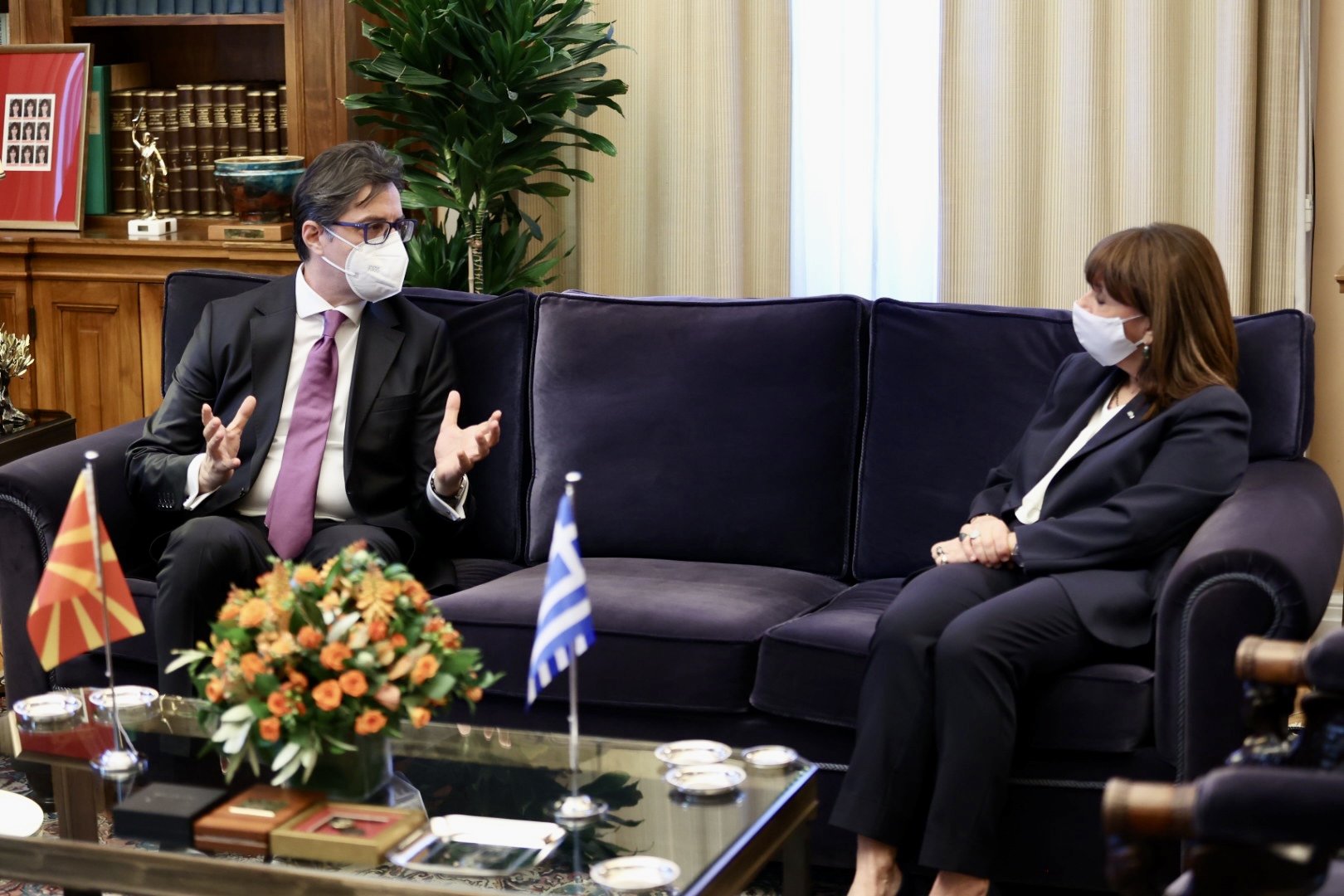 The President of the Republic of North Macedonia, Stevo Pendarovski, had a tete-a-tete meeting Today in Athens with the President of the Hellenic Republic, Katerina Sakellaropoulou, which was followed by a plenary meeting of the delegations of the two countries.

The meetings noted the positive trend of the overall bilateral relations between the two countries, but also the potential for further strengthening of cooperation in every field. Satisfaction was expressed that both countries have left the past behind and are focused on the future. At the meetings, President Pendarovski expressed gratitude for the support of the Hellenic Republic, which is becoming one of the most vocal supporters of our integration into the European Union, and expressed expectations that the support will be intensified in the coming period.

At the tete-a-tete meeting, President Sakellaropoulou welcomed President Pendarovski and said that this first official visit of the President of the Republic of North Macedonia to their country is important and will contribute to the development of relations between the two countries. “I want to emphasize that we are investing in strengthening our bilateral relations and your European perspective”, President Sakellaropoulou said.

“You will agree with me that the full implementation of the Prespa Agreement in good faith is important for the development of our relations. The Prespa Agreement is being implemented for already two and a half years and we have to admit that many positive steps have been taken towards its implementation, but there are still many unresolved issues. Closing these open issues will contribute to the further development of our relations.”

“For our part, we are reviewing all aspects of the Prespa Agreement and trying to resolve all outstanding issues to improve our relations”, the President of the Hellenic Republic, Katerina Sakellaropoulou said at the meeting.
President Pendarovski stressed that this visit has a historical dimension and is significant, as the first meeting at the highest political level between two neighboring countries in thirty years.

“We have had excellent cooperation before, but from 2018 onwards we are setting the political and legal framework called the Prespa Agreement, which has enabled us to cooperate even closer. I want to tell you a legal principle that you are well aware of and that we intend to adhere to in relation to the Prespa Agreement. It is ‘pacta sunt servanda’, or the agreements should be kept and respected”, President Pendarovski said.

President Pendarovski added that he agrees with the qualification that many things have been done in the past two and a half years in the implementation of the Agreement.

“I would say the biggest, most difficult part has been implemented, of course there are a few more things to be done, and we have a clear political will and intention to implement that agreement to the last letter”, President Pendarovski said at a meeting with the President of the Hellenic Republic.

The President pointed out that the Committee on Historical, Archaeological and Educational Issues and the Committee on Trademarks reached an agreement for the next meeting. “Their work was stoped, but I expect that time to be compensated now and to start with an accelerated pace to solve the remaining issues that are on the agenda”, President Pendarovski added at the meeting.

“Prespa enabled us to join the NATO Alliance and our next goal for which we expect your help and support is to start negotiations with the European Union and to complete our European and Euro-Atlantic dream. Let us not forget the whole title of the Prespa Agreement. It is not only for resolving the name issue, but also for establishing a strategic partnership between our two countries”, President Pendarovski said at the tete-a-tete meeting with President Sakellaropoulou.

The plenary meeting of the two delegations confirmed the support of the Hellenic Republic for the European perspective of the Republic of North Macedonia and the countries of the Western Balkans and reaffirmed the readiness for full implementation of the Prespa Agreement.

President Pendarovski stressed that the consistent implementation of the Prespa Agreement will be proof that the Hellenic Republic respects its international obligations.

At the meeting, the President thanked for the solidarity and the donated vaccines, as well as for the assistance in dealing with the recent fires in Gevgelija.