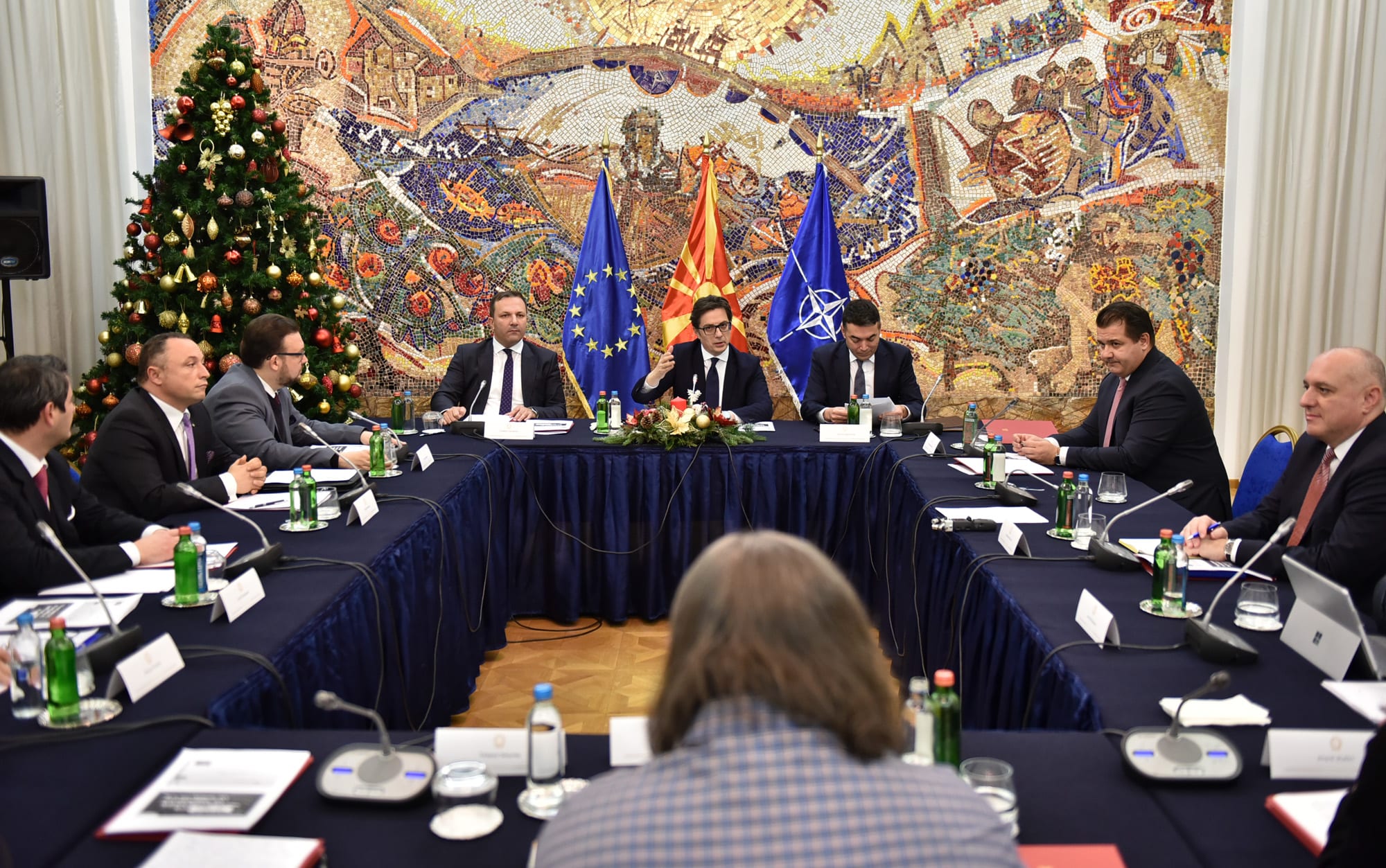 A regular session of the Security Council was held today in the Cabinet of the President of the Republic of North Macedonia.

In the first part of the Security Council session, current issues of state interest were discussed.

President Pendarovski said in the statement after the session that the first item on the agenda was the report on the situation of our troops in international missions which was elaborated by the Chief of Staff and the Minister of Defense. The President said that at the moment our troops are in international missions in Bosnia and Herzegovina, in Afghanistan, in Lebanon, as well as troops deployed on our southern border.

“The situation with all of our contingents at the border with the Hellenic Republic and outside our borders is regular”, President Pendarovski said.

The second item on the agenda, the President said, was the report on the ongoing staffing and technical equipping processes of the Operational Technical Agency which was elaborated by the OTA Director, who also informed about the current situation with the spatial accommodation, staffing, training of the necessary personnel, technical equipping necessary to carry out the duties and obligations under the Law.

“We can conclude that things are going with the desired pace. Here, we have a number of foreign experts who have been helping to establish our new institution since the very beginning, and I can say that their evaluations are also quite positive and that OTA is already up to its task for a year and a half. Some major difficulties in its operation have not been noted, President Pendarovski said.

The second part of the session was devoted to the issue of air pollution, and the attendees welcomed the President’s initiative to raise the topic to such a high level, and all agreed that this topic should not be politicized and used in daily political debates.

President Pendarovski said at the press conference that the topic was discussed for more than two hours, and assessed the dialogue as constructive. Environmental problems, the President said, need to be addressed better and systematically and no one can solve them in one term.

“The main idea we had before we convened the session was met, it is raising public awareness, because never in the history of our country so far has this problem been discussed at such a high and representative political level that is becoming more acute, not only here, not only in our region, but everywhere in the world. The Security Council is an advisory body to the President, not a decision-making body. We are not here to make decisions to address these problems, or to accelerate positive trends in this area. It is indisputable that at this level it is also necessary to inform the public, that this issue is not treated as ad hoc, but systematic, i.e. more systematic than before. I think it was the main point that all the participants in today’s debate supported, this is often discussed – the highest political level and the people in the NGO sector to demand accountability from people who are paid to work in this area”, President Pendarovski said.

President Pendarovski reminded that in his annual address he also pledged to increase the state budget for environmental protection, which, as he stressed, should be in the coming years as soon as possible and as close to the average of the European Union member states as possible.
According to the President, Chapter 27 on the environmental protection, is considered one of the most difficult and most expensive in the negotiations, and in that part we must prepare well.

“At the session we heard from some of the participants that Chapter 27, according to the estimation of the negotiators from Montenegro, which is pretty far in the negotiations, they think it would cost them EUR 1.5 billion in a decade. If we go along with these parameters, it means that even now we can give a rough estimate, that Chapter 27 would cost us over EUR 5 billion. It is extremely important segment of people’s lives”, President Pendarovski said after the second session of the Security Council.