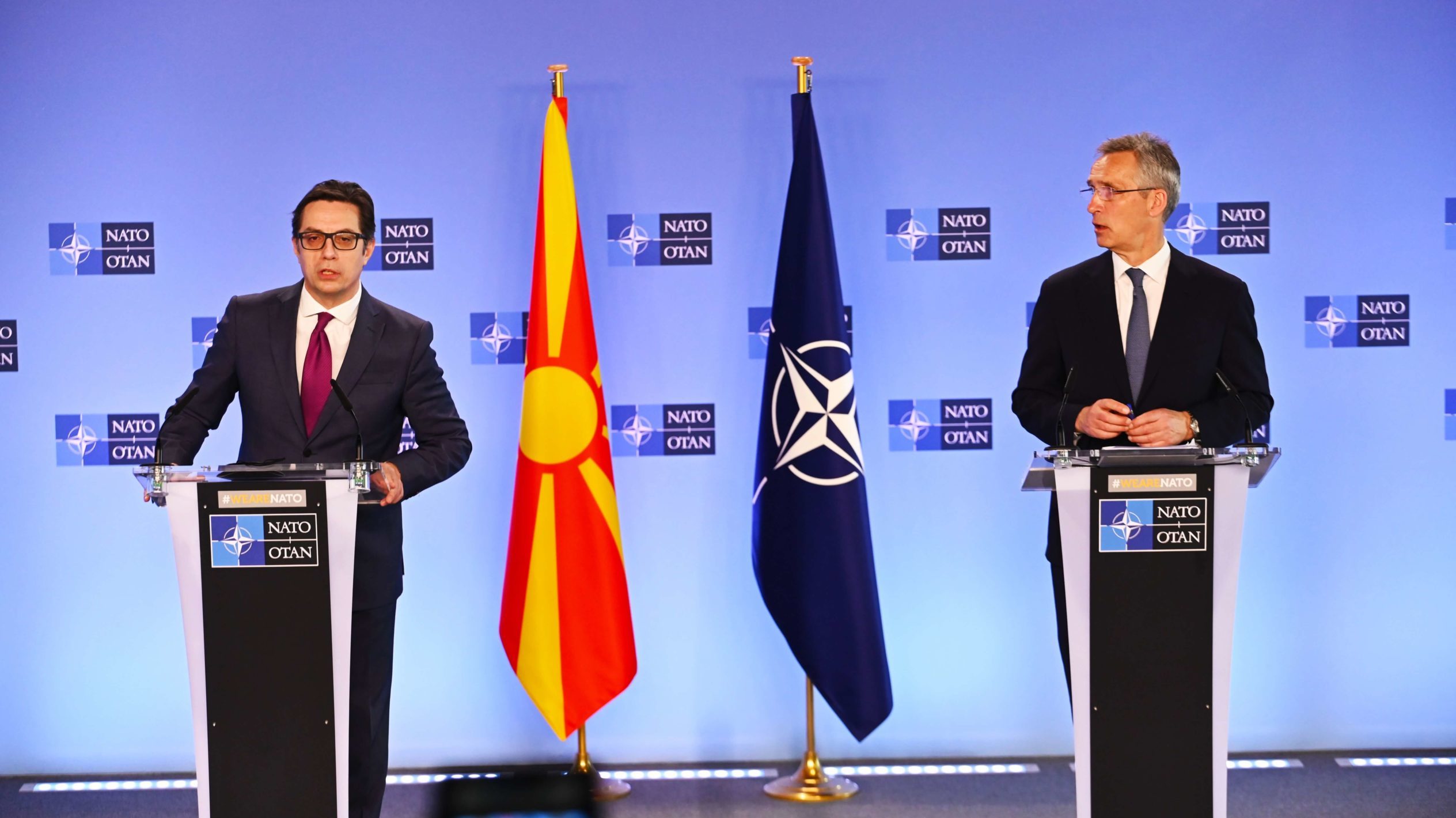 The meeting focused on the cooperation between the Republic of North Macedonia and the NATO Alliance, the current regional and security issues, the country’s foreign policy priorities and the opportunities for deepening the cooperation in dealing with the consequences of the global Covid-19 pandemic.

At the meeting with the Secretary General Stoltenberg, President Pendarovski reaffirmed the readiness and commitment of the Republic of North Macedonia in promoting peace and stability, emphasizing that the country will continue to actively contribute in the future to the NATO-led international peacekeeping missions in the region and beyond.

Below is the integral text of President Pendarovski’s statement given at the joint press conference after the meeting.

This is my first visit to NATO as President of the Republic of North Macedonia. Recently, on March 27th, we marked the first anniversary of our NATO membership. It took us many years and we made some very difficult decisions, but we were persistent in achieving our strategic goal. We do believe that NATO membership is very important for maintaining the security and stability as a prerequisite for prosperity and strengthening the democratic institutions. And I would like to personally thank you, Mr. Secretary-General, for your important role and engagement in the successful completion of the process.

Our membership coincided with the outburst of the pandemia and in the early months of this global crisis, the Macedonian citizens experienced the importance of NATO solidarity, as we received valuable backing from member-states as well as from the organization itself. I would like to use this opportunity and on behalf of our people to once again express our gratitude for this much-needed help, extended in a very difficult period for every one.

The pandemic is, of course, only one of the challenges on the horizon. As NATO member we will actively participate in responding to the traditional and new threats. And we will do so in at least three ways.

First, by investing in defense. Our current defense budget stands on 1.57% of GDP. We are committed to reaching the threshold of 2% by 2024, within which we are already allocating 20% of the budget for the modernization of our Army in line with all NATO standards.

Second, by continuing the defense reforms. NATO membership is helping us to strengthen the resilience of our security system, particularly when it comes to challenges posed by third parties. Being a target of hybrid threats in the last few years and  being situated in a fragile region that still has some open issues, the cooperation with the NATO Intelligence and Security structures is of utmost importance for North Macedonia.

Third, by exporting security together through NATO-led operations. Years before becoming a member we have being part of NATO mission in Afghanistan, and we recently became a Troop Contributing Nation in KFOR. We welcome the decision to start the withdrawal of NATO Resolute Support Mission by 1 of May. However, our intention is to remain engaged in all NATO-led missions today and in the future.

The upcoming NATO Summit will be a good chance for discussing the emerging challenges, but, also, strengthening the Trans-Atlantic partnership which beyond doubt will have positive impact on the stability of the Western Balkans.

During our meeting with the Secretary-General we have exchanged views about all of this topics, but, also about the ongoing initiative NATO 2030 in order to make the strong Alliance even stronger.

Mr. Secretary-General, dear Jens, once again, thank you for your hospitality and support.