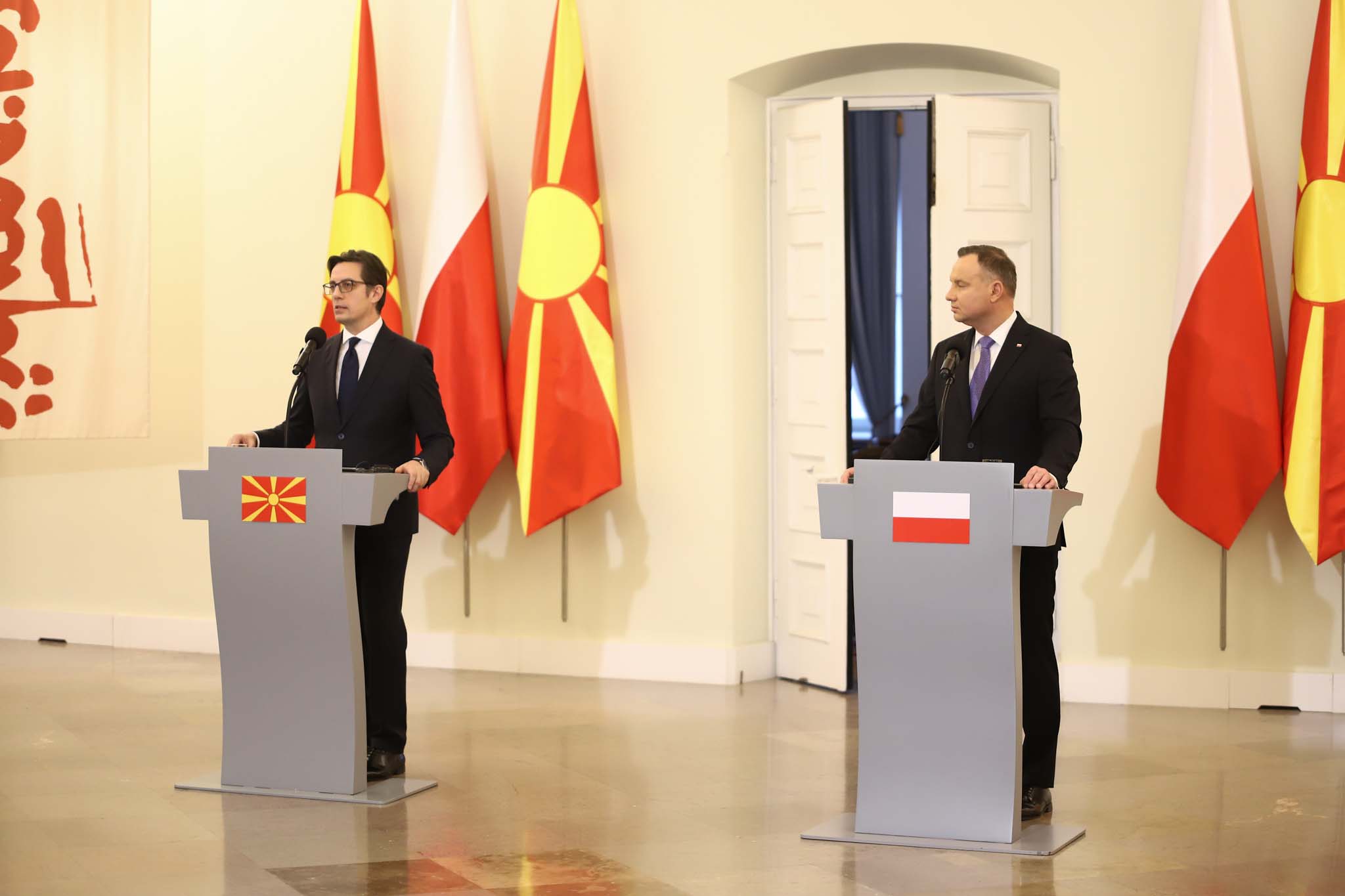 The following is the integral text of the statement of President Pendarovski.

It is a great honor for me today to pay an official visit to the Republic of Poland and therefore I take this opportunity to thank for the invitation and the hospitality shown here in Warsaw.

We had a frank and meaningful talk with President Duda, concluding that the Republic of North Macedonia and the Republic of Poland maintain friendly relations with constant political dialogue, with growing economic cooperation and a mutual commitment to strengthening and promoting cooperation in all areas of mutual interest.

The Republic of Poland is our important, proven partner and supporter in meeting our strategic goals – membership in NATO and the European Union, goals for which we have a clear national consensus and broad citizen support.

At the meeting, I thanked Poland for the speedy ratification of the NATO Accession Protocol and, as we all expect, after the ratification in the Spanish Parliament, North Macedonia is soon to become a full member of the Alliance.

The meetings with our Polish hosts focused on the achievement of our second strategic goal – EU membership, in the context of the upcoming EU summits – in March in Brussels and in May in Zagreb.

We also exchanged views and information on the new methodology for conducting accession negotiations, as well as on the activities that precede the European Council in March. The A proposal for the new negotiation methodology should be announced this week, and it is crucial for us that the EU member states align sooner on it and this spring we receive positive news about our European integration during the Croatian Presidency of the European Union. We are ready to adopt the new negotiation methodology in order to have an effective accession process, with measurable results and concrete benefits for citizens.

We continue to work towards meeting our strategic goals, both in good neighborly policy and in our domestic reform agenda. I hope that the support of Poland in this very important time for us and the personal support of President Duda will continue.

The experience of the Visegrad Group countries is extremely useful in our Euro-Atlantic integration process. In this regard, I would like to emphasize that the so-called Skopje conference as a platform for exchange of Polish experiences in integration is effective for us. We are pleased with sharing our experience and knowledge with our Polish partners at the seven meetings held so far. We look forward to attending the eighth meeting, which is to be held here in Warsaw this year, as a country with a given date to open negotiations.

We also much appreciate Poland’s help in dealing with the refugee and migrant crisis on our southern border. By March this year, 1,000 police officers from Poland within 34 rotations and contingents were and will be involved in the European assistance of our police and army to secure the border.

At the meeting with my Polish counterpart, I also expressed our readiness to increase the cooperation in economics, science and education, as well as to increase the cooperation in the field of security and defense. Together we concluded that there are no open issues between our countries, and it is particularly important to develop and intensify the economic cooperation for which there are great potentials on both sides. The establishment of a direct airline between Skopje and Warsaw, and summer charter flights between Ohrid and other Polish cities, is an important step towards improving and facilitating contacts between business communities on both sides, but also increasing the number of Polish tourists.

Besides good political relations, there are other things that connect our two countries and our citizens. Poland has, as is well known, made a very significant contribution to the construction of post-earthquake Skopje.

Last but not least, I would like to highlight the cooperation we have in education and culture, as a successful example of Macedonian-Polish relations and the building of linguistic and cultural ties. I would like to mention here the cooperation of Macedonian and Polish Slavists within the Macedonian language departments in Poland, as well as the Department of Polish Language and Literature at the Blaze Koneski Faculty of Philology at the Ss. Cyril and Methodius University in Skopje and the International Seminar on Macedonian Language, Literature and Culture, traditionally held every year in Ohrid, and especially last year’s marking of the 65th anniversary of Polish studies in Skopje.

In the end, let me once again express my gratitude for the hospitality here in friendly Warsaw, as it befits two friendly and European countries.