Statement by the President of the Republic of North Macedonia, Stevo Pendarovski, after the first part of the leadership meeting 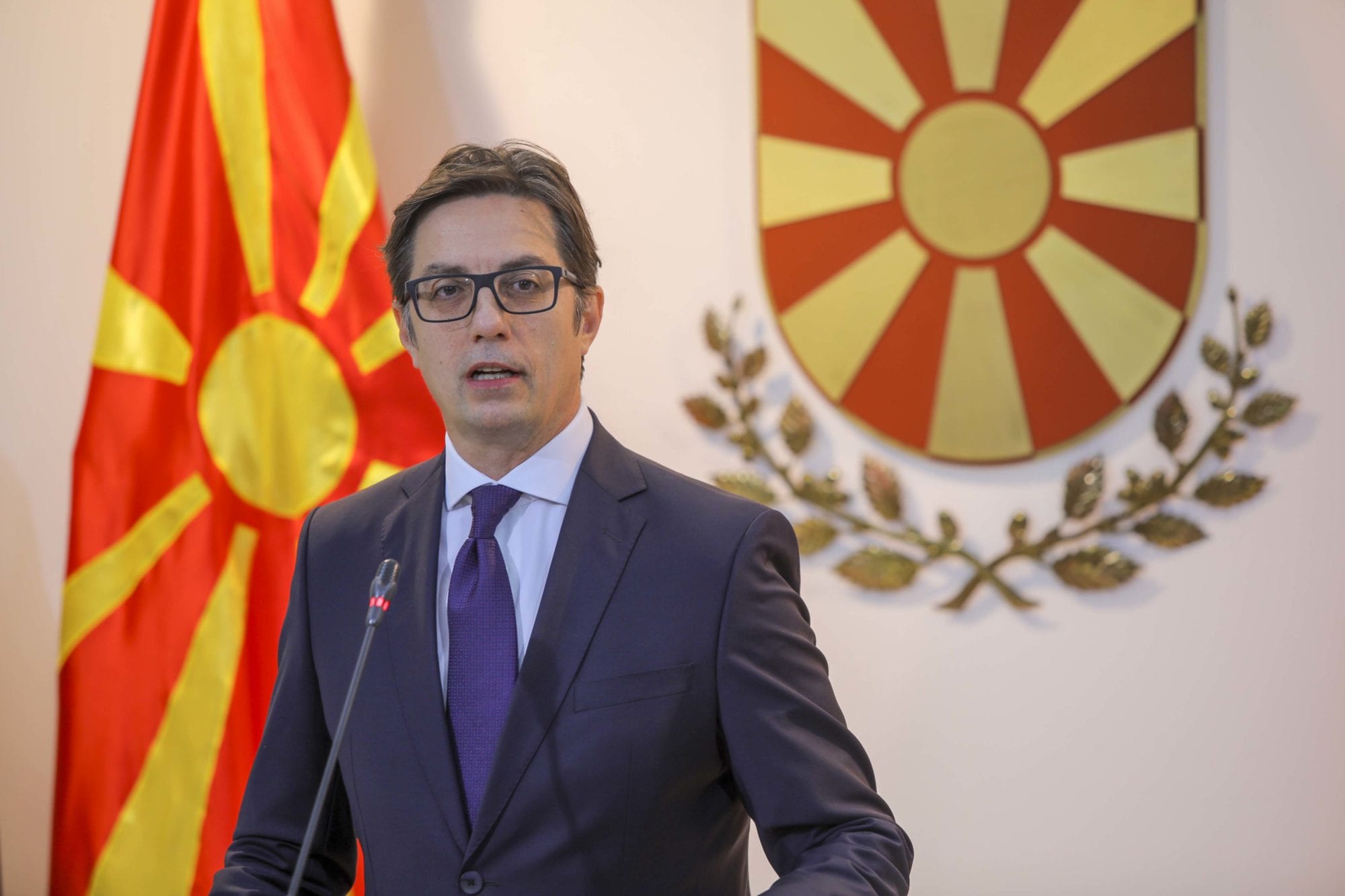 Let me inform you that we are halfway through the meeting. In principle, we have 2 points of discussion. The first point refers to the recent conclusions of the European Council, which we all know well. I asked all the participants at today’s meeting to reaffirm our position that we are continuing on the same path towards the European Union. Here, I will disclose a few specifics and a few conclusions that we reached with absolute consensus. The second point refers to the possibility of holding early parliamentary elections.

We finalized the discussions regarding the first point and I am here because it is in accordance with my responsibility to inform you what has been agreed. After the break, we will immediately proceed to the second point about the possibility of holding early parliamentary elections, for which you will receive information on who will inform you. We may come up with statements from the leaders present here, but for that after we finish the second part of this meeting.

For the first part, I owe you an explanation. Some of you asked me about the format. I want to explain this briefly. We followed a principle. We also invited the political leaders of political parties who won independent MPs in the last parliamentary elections, MPS who are not part of a coalition. Of course, there is no strict legal provision for this, these are objectively informal meetings that no law foresees in what format they should be convened, but I want to tell you that it was not by accident that these people were invited.

Ladies and Gentlemen, I said this at the beginning of the meeting. I think some of you noticed it. I remember well that our country is in a similar situation for the third time, at least in terms of our international establishment and our Euro-Atlantic aspirations.

In 1991, we were in a similar situation, in a completely different international and political context, when the famous Lisbon Declaration was adopted that said the state would not be recognized at all if it contained the word Macedonia in its name. That was the conclusion of the then European Union. It was overcome, a year later we became a member of the United Nations and lateron of all other global and regional international organizations. In 2008 we were in a similar situation; I have enough years to tell you that I was member of the Macedonian delegation that was at the NATO Summit in Bucharest in 2008, when we were de facto blocked due to the name dispute with our southern neighbor, i.e. the whole alliance did not reach an unanimous decision that we should become a member, and now,  even after these extremely unfavorable conclusions of the European Council a few days ago to halt our bid to finally begin negotiations after years of waiting, after 14 years of candidate status and after fulfilling all the preconditions set by the European Union itself at its June summit last year, when we were again rejected, i.e. the issue was postponed for the coming spring, for the next presidency of the Republic of Croatia with the European Union. I am pleased, and I like to point it out to the public, that all invited political party leaders expressed a clear state-building capacity and stood behind this strategic goal set out in the early nineties. None of them failed to say that this is the only path our country, the Republic of North Macedonia, should go now, and that there are no alternatives on that path, because it is the only alternative that guarantees, mid- and long-term, that the state can be transformed into a prosperous, democratic and economically prosperous state and society.

I am telling you what I asked of them and what we got. We have a clear state consensus of the relevant political leaders in our country that, regardless of the conclusions of the European Council, they support the idea of ​​the Republic of North Macedonia to start and complete the negotiations as soon as possible, and thus to become a full member. Everyone at the meeting agreed that we have no problem with a possible new and improved methodology for conducting accession negotiations. Everyone at the meeting said they had no problem if the new methodology implied a process of reversibility. Hence, when you close a chapter, if the trends in that area are negative, they can freely say that we have to work on that chapter again, that we need to go back, even to the very beginning of the process.

We have nothing to fear, it is in our interest and in the interest of our citizens. If we do not have good results, if the results are not in line with the European principles, they can tell us to do some more work. However, all the leaders present at the meeting said “no” to any alternative to the accession process for our full membership. So far no one has offered it to us, but on the sidelines of the debate we followed in Brussels and Luxembourg there were some different considerations that maybe we should be put in the neighborhood category, which is quite another category. In terms of the EU, we are part of Europe and according to the basic documents, according to the EU founding documents, we have the right to be an EU member on the day we meet the criteria. Because the basic documents of 1957 say, every country on the continent can apply to become a member of that organization. We do not ask for any alternative to this format, to this wording, but only as a full member of that organization. This was the first part, we stopped here. We have a consensus that we reaffirm these values ​​and positions and we do not even think of an alternative at all. Whoever is in power today, tomorrow, in the years to come, and whoever is in opposition, everybody is committed to work, everyone in the position he has at the moment, on our sooner EU accession. In the second part, we will talk about the early parliamentary elections.