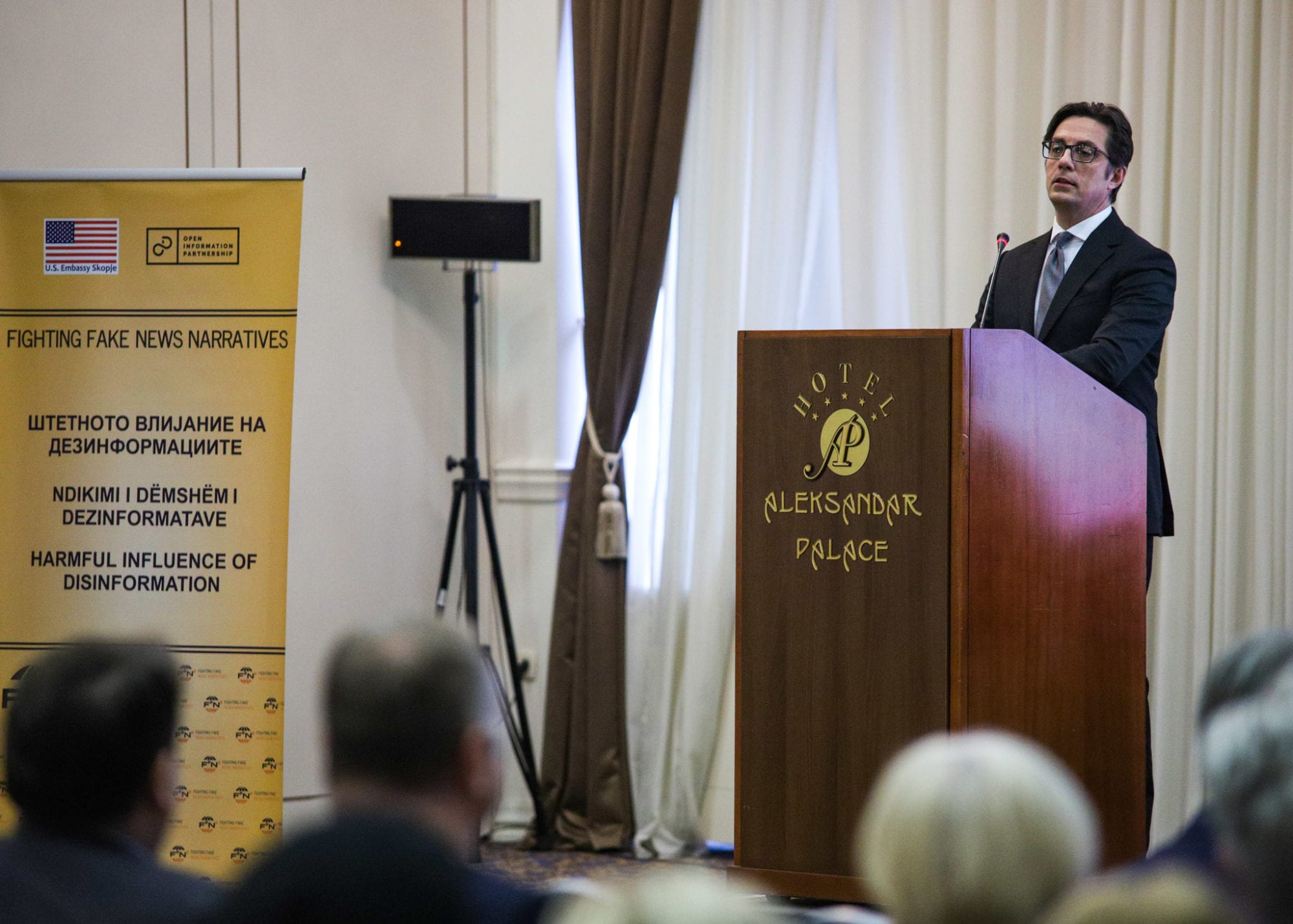 The President of the Republic of North Macedonia, Stevo Pendarovski, addressed today the debate: “Harmful Influence of Disinformation”, organized by the Citizens’ Association MOST.

In his address, President Pendarovski stressed that technological development and digitalization have enabled the availability of digital platforms that are easy to operate, but the same technology allows rapid dissemination of disinformation and multiplication of their action, creating an alternative reality of disinformation in which the truth is lost.

I would like to thank you for the invitation and for the possibility to address today’s event on a topic that is very relevant throughout the democratic world – the harmful influence of disinformation. I will not say anything new if I say that freedom of speech is one of the foundations of democracy, which allows debate on key issues in a society through the free expression of different opinions.

Unlike in the past when the main channels of information were traditional media, today digital platforms, blogs and social media are becoming the main source of information. The digital revolution has brought about significant technological changes that have enabled social media to become a widely used channel of communication. They are used by individuals, companies as a way to promote their services and products, and at the same time, digital platforms have become places where many media have nested. They enable instant expression and create different audiences by quickly grouping people around a current topic. They provide criticism of state institutions and private companies and thus affect the improvement or deterioration of the reputation of certain entities, social groups, and even entire communities.

Digitalization has undoubtedly contributed to the strengthening of freedom of speech, because now civil society organizations, informal groups of activists and political parties reach different categories of citizens much easier and faster. The Internet and social media have enabled an incredible pluralism of the media image nationally and globally, enabling the marginalized to become visible.

However, within the expansion of social media, unprecedented in the history of mankind, there is a new, serious challenge and problem, and that is the abuse of freedom of speech by various participants in public discourse, and often the abuse of the right to privacy. The technological development and digitalization have made available digital platforms that are easy to operate, but the same technology also allows the rapid spread of disinformation and multiplication of their action, creating an alternative reality of disinformation in which the truth is lost.

We are witnessing that phenomenon even in the latest crisis with the emergence of the corona virus. From the very beginning, the World Health Organization appealed for information from authoritative sources, emphasizing that there is an epidemic of fake news.

For years, growing trends of fake news and disinformation, emergence of “troll” factories, i.e. fake profiles that simulate a debate on a topic that is beneficial to a particular political or business organization, as well as a lack of verification of facts in the contents that are published have been known globally. In recent years, there are debates on the impact of social media on elections in different countries, raising the question of the role of social media in the development of democracy.

To be efficient in the fight against fake news and disinformation, joint efforts are needed, effective cooperation of state institutions with the civil sector, media, education and businesses that will be encouraged usage of best practices and cooperation with foreign partners.

Any responsible society that wants to be democratic must constantly oppose disinformation in an organized way. It is not the sole responsibility of media outlets or businesses to deny disinformation. This process, in addition to being long-term, should also be comprehensive. It is our responsibility to educate generations of young people who will read, have developed analytical skills, and distinguish between lie and truth. It is our duty to develop awareness that technology should be used for the public good, to respond to fake news with more education, to develop critical awareness among all age categories, and to support civic initiatives working on media literacy.

Today I am here with you to say that I am open for cooperation with all institutions and individuals from the country and abroad with whom we can work together to introduce good practices, in order to contribute to reducing the spread of disinformation. I have no doubt that our ultimate goal is common, and that is – promotion and development of democracy.