President Pendarovski: Conducting credible census is a test of our maturity as a country 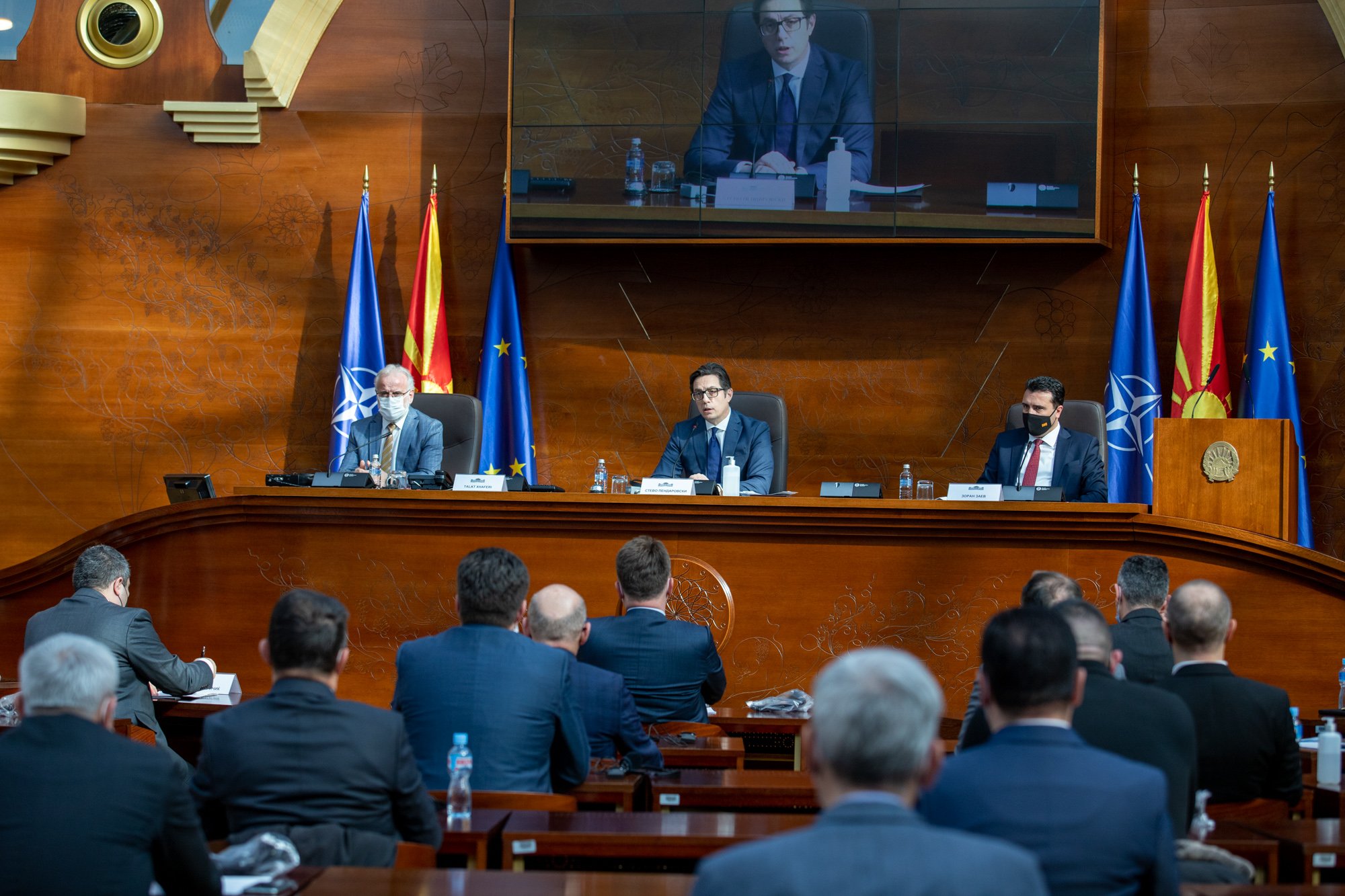 President Pendarovski addressed today the meeting organized by the State Statistical Office with the mayors of the municipalities in the Republic of North Macedonia, dedicated to the importance and the role of the local government in the process of preparation and conduct of the census od population, households and dwellings in 2021.

It is my honor to greet you at this event dedicated to the Law on Census of Population, Households and Dwellings in the Republic of North Macedonia in 2021.

This census will be conducted in an unusual period. Due to the pandemic, the whole world is going through a great transformation. A country’s success is measured by its ability to cope with the numerous economic, social, health, environmental and educational effects of the pandemic. One of the main elements necessary for successful policies is exactly the realistic picture of the number of population and its economic, educational and social structure. There is no other way to get a realistic picture, except through the census as a statistical operation which is a prerequisite for any organized state to be able to plan its development. Unfortunately, for well-known reasons, we have not had those vital statistics for almost 20 years.

Although it was adopted and entered into force only a few days ago, the Law on the Census has been a topic stirring the public for a long time. Therefore, before signing the Decree promulgating the Law, I met with representatives of relevant state institutions and consulted with prominent domestic and international experts in the field, including Eurostat. Their general position is that the provisions in the law (I am talking about the general framework) do not deviate from the standard international norms and principles and from the practice in organizing censuses in most members of the European Union. Thus, I am deeply convinced that the legal solution itself is not an obstacle for the correct conduct of the census. I am also convinced that the State Statistical Office has sufficient knowledge, experience and resources to conduct this important statistical operation in a professional manner, respecting all recommendations and measures for protection against COVID-19.

In my opinion, the census related problems are neither legal, constitutional, technical nor health. The biggest challenge in implementation can only be the unnecessary politicization that has been created in the public for some time.

This politicization includes calls for a boycott of the census, bidding for the representation percentage of communities and announcements that the results will not be accepted unless they reflect someone’s desired figure. Although they come from different sides, all attempts at politicization have a common denominator. Namely, they are all a reflection of the fear of the census results.

It is my opinion that the fear stems from the misunderstanding of the concept of human rights as supposedly a set of privileges that someone gives or takes away from someone. Unfortunately, it is true that in the Balkans, human rights are still seen through an ethnic prism and the census is not perceived as a statistical operation, but as a political project. Therefore, whenever a census is conducted in the region, we believe that the strength is in the numbers and that our rights depend only on those numbers. That is the main reason why we have not organized a census for almost 20 years and why we stopped it in 2011. But human rights and freedoms are not privileges that can be lost or taken away depending on one’s will. In a democratic country with a European future, the acquired rights must not be taken away, but only increased, and this should apply to all citizens, regardless of their number.

In that sense, the politicization of the census is just a defocus from the real problems that Macedonian citizens face, and they are mostly in the economic and social sphere, the rule of law, and as their consequence – emigration.

If there is one thing that should really scare us all from this census, it is the number of emigrated citizens, the number of young people who have left the country forever looking for a better life for themselves and their families. This is one of the biggest threats to the future of the Republic of North Macedonia. Citizens of all ethnic and religious backgrounds emigrate. They emigrate from all municipalities, from all towns and villages. The negative effects of emigration are most directly felt at the local level. You, as mayors, know much better how this reflects on the life and development of the municipalities. You probably know many of your fellow citizens who bought a one-way ticket.

It is true that the forthcoming census will confront us with our greatest fears. But these are not fears of the other, of the different, but fears of the really small number of people who live in our country.

It is indeed this confrontation with the reality that is absolutely necessary to help us finally focus on the real problems. Instead of getting into unnecessary arguments and accusations in whose time more citizens emigrated, we should jointly seek solutions to reduce emigration. The census is extremely important to define policies, projects and budgets at both central and local levels. This data will demonstrate what kind of infrastructure, how many kindergartens, schools and hospitals are really needed in each settlement. The results will also affect the correction of urban plans to reflect the objective needs of the resident population. Finally, the census will help the institutions at central and local level to better perform their function in the service of the citizens.

We need a census whose results will not be disputed, and a precondition for that is to have a political consensus that regardless of the results, no one’s rights will be endangered or taken away. I have repeatedly said that we will depoliticize the census only if all relevant political factors send clear and unambiguous messages to the Macedonian citizens in this direction. No democratic state can prosper if it deprives the citizens of any community of their acquired rights. Any such attempt can only deepen the divisions in the Macedonian multiethnic society. Therefore, let me repeat once again – if something depends on the census results, it is not the rights of the citizens, but the future development of the country.

I want to call you, as mayors, to send exactly such messages to the residents in your municipalities. The effects of a well-conducted census will be felt most by the citizens at the local level. Your willingness to work in this direction will demonstrate whether the results of the census will be used to design development strategies and policies for the benefit of all citizens, or will be another reason for deepening divisions at local level.

At the same time, one thing should be clear to us: the responsibility should not be sought in the citizens; the responsibility is with us, the politicians. We must prove that 30 years after September 8, 1991, we have finally matured as a state and that we deserve the independence on the foundations of which generations of freedom and human rights activists have invested decades before us.