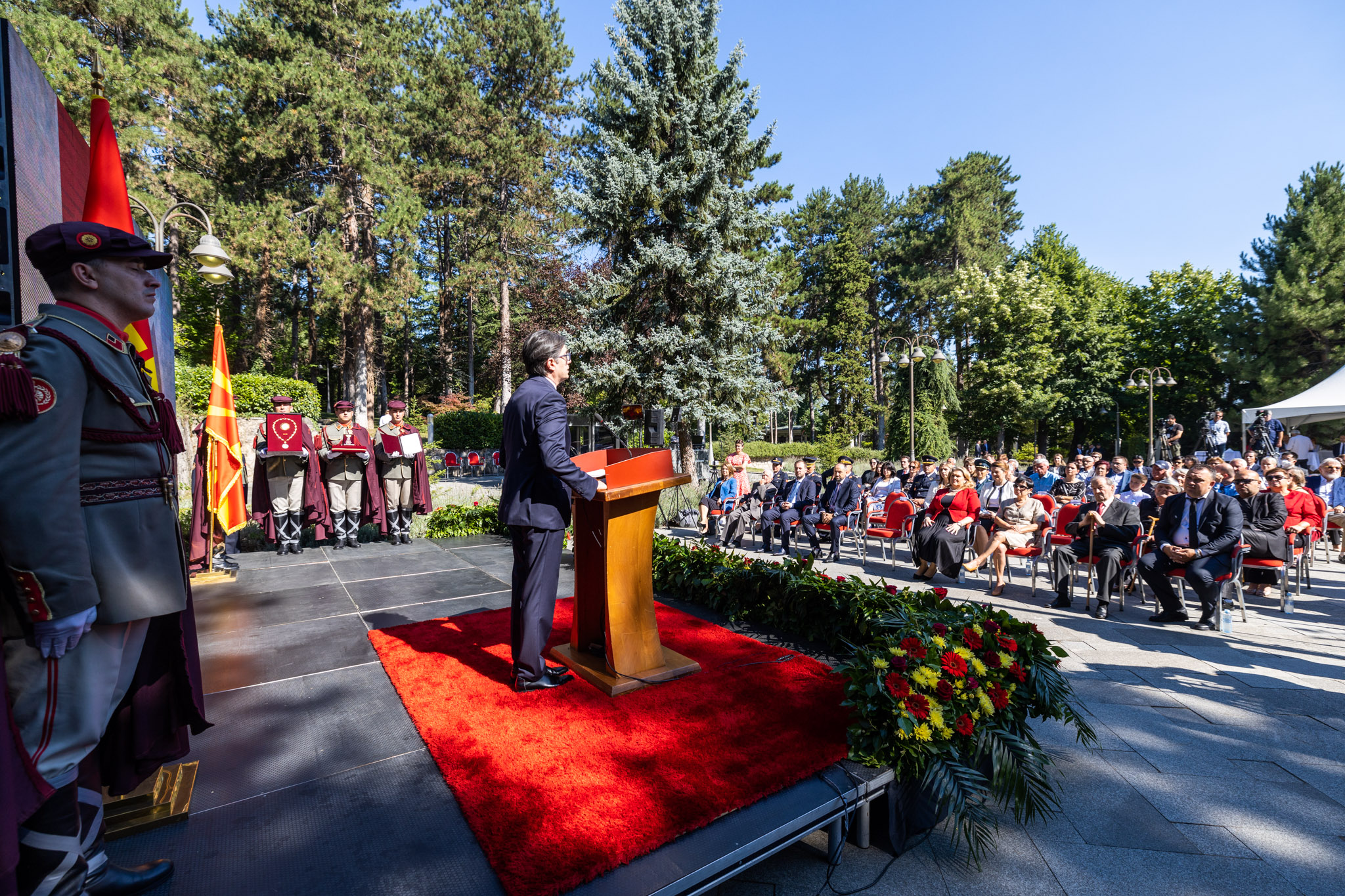 The day of St. Ilija is when we celebrate our biggest state holiday, because on this day, Macedonian and other peoples established their two Republics – the Krushevo Republic in 1903 and the ASNOM Republic in 1944. Searching for a way out of the authoritarian monarchies and autocratic regimes that were systematically oppressive, assimilating and exploitative, the Macedonian people found their salvation in the Republic, as the most just and progressive state system. A system whose role was to enable a free, functioning political community united around the common good and public interest.

The Krushevo Manifesto shapes the contours of the Republic that the Ilinden fighters were fighting for – a Republic founded on the ideals of justice, freedom and a dignified life in which there would be a place for every man and woman, regardless of their nationality, language and belief.

This vision of the Republic was upgraded during the National Liberation and Anti-Fascist War in which the partizans united all progressive forces in a wide national front. National liberation committees were established on the free teritories, as forerunners of the future ASNOM Republic, whose very nature was national and anti-fascist.

Many people perished fighting for such a progressive and anti-fascist Republic, among them – our first female partisan, Nevena Georgieva – Dunja. Nevena devoted her short life to the fight for social justice and national liberation. She believed that through the anti-fascist fight, women would also be able to fight for their equality with men. Nevena participated in the establishment of no less than three partisan brigades – Skopje, Strumica and Veles. She traveled throughout the country by foot and going by the names of Dunja, Stojka and Rajna, motivated the people to join the fight. Persecuted by the fascist occupier and their brigades, Nevena heroically lost her life in order to help her fellow fighters retreat safely and continue their fight for freedom.

The memory of her is so deeply etched in our collective memory that, if you ask people today, a vast majority of them will tell you without any doubt that Dunja was a national hero from the National Liberation Fight. Unfortunately, facts speak that there was an ommission and that she was never declared a national hero. Therefore, as a token of gratitude, we, the generation of today, posthumously award her the Order of Military Merits.

In order to truly see what kind of a Republic the National liberation fighters fought for, we should take a look at the biographies of the greatest in that glorious anti-fascist generation after the war. One of them is Krste Crvenkovski, a fighter and national hero who actively participated in the national uprising since its very beginning on October 11, 1941. He witnessed that ‘the ASNOM resolutions provide a crystal clear formulation of the ideals of Macedonian people for sovereignty and statehood. That was the foundation of the new Macedonian Republic.’

As a long standing member of the highest political and state leadership at both the Republic and federal levels, Krste Crvenkovski was able to channel into actions his vision of the Republic as a common good. Treating the other republics as national states of the constitutive peoples of Yugoslavia, Crvenkovski advocated the decantralization of the federation and respect of the legitimate interests of the individual Republics. His role in the establishment of the Macedonian academy for sciences and arts, the development of Ss. Cyril and Methodius University and the revival of the Macedonian Orthodox Church all testify of his vision for a Macedonian Republic with a developed education and science as well as autonomy of cultural and spiritual life. He opposed the rigid understanding of political party monopoly, but supported the liberalization of politics and democratization of the state. Experiencing the Macedonian multi-ethnic ambient as an advantage rather than a setback, he was an active supporter of the full emancipation and affirmation of non-majority communities.

Thirty three years ago, as a young man stepping into politics for the first time, I had the honor to meet him, along with Slavko Milosavlevski and Kjamuran Tahir, who shared his views, and witness myself that although they were part of a single party system, they knew how to focus their view outside of the ideological parameters of time.

Taking into consideration all his merits, we hereby posthumously decorate Krste Crvenkovski with the Order of the Republic of North Macedonia.

The glorious anti-fascist generation is slowly leaving the historic scene. We have less and less living participants in those events. Unfortunately, throughout these years of independence, we have also witnessed attempts to relativise the meaning of NOB, and thus the achievements of our partizans. On the eve of Ilinden, I had the honor to visit several of the surviving fighters and ask them what they fought for and against whom. Remembering the fight for a free Macedonian Republic, Ilija Dunovski from Ohrid told me ‘a fight is not won by arms only, but with heart and courage’. Therefore, today, we thank all surviving partizans with Medals for Courage.

With these decorations today, we make a symbolic attempt to correct a few historical injustices. The first one being the ommission of declaring Nevena Georgieva – Dunja as a national hero. The second one – eliminating Krste Crvenkovski from public and political life because of his liberal positions and progressive policies. The third one were the attempts to relativise the meaning of NOB and ASNOM as the symbolic umbilical cord connecting our first and our third Ilinden.

This act comes at a time when our country is yet again faced with attemps for negation of the national –- of the Macedonian people and contestation of its unique national features.
The revolt of the citizens is justified, as all our successes as an independent country were gained –- ; however, we shall not renounce our strategic goal of becoming part of the community which, all flaws comprised, still managed to create a space in which people are free to be who they are.

As part of our committments for full integration of North Macedonia in the European Union, we have every intention to fulfill all requirements set in the European negotiation chapters; nevertheless, we have no intention to discuss, with anyone, the revival of imperialist concepts and ideas from some past centuries instead of European values.
The concept of United Europe provides us with the best opportunity to finalize the development of North Macedonia as a modern European Republic. These efforts are the sacrifice of our generation for the benefit of our youth and their future. Yet, for all of this to not be in vain, we have vast unfinished business before us at home, where we have to continue building this country as a just and progressive one, in which Macedonian citizens will have a dignified life, good education, quality healthcare and an efficient justice system that will suppress crime and corruption.
I am well aware that some of the citizens are afraid that this path towards Europe might impose a censorship on our historical memory. That, allegedly, we would not be able to mention who our heroes fought against. Or that we would have to close our eyes before the facts surrounding the deportation of Macedonian Jews to Treblinka and the massacre of the young people in the village of Vatasha. That we will have to shut our ears in order not to hear the testimonies of our last surviving fighters – the generation that personally experienced the 1941 – 1944 occupation by the pro-fascist Government in Sofia at that time.

However, if we cease to speak the historical truth, we would become accomplices in the making of a new historical injustice. These decorations are our response to every attempt to silence the truth. The historical truth cannot be altered by an agreement or a protocol, because facts are able to unravel any imposed knot.

The historical truth is not subject to compromise, and speaking of historical facts has never been, nor can it be, hate speech. The project of United Europe unequivocally confirms that the road to an authentic and lasting reconciliation leads through justice based on truth. Therefore, we will continue speaking the truth and nothing but the truth.

We should not feel any fear. If macedonian people never succumbed to any attempt for assimilation, denationalization and historical revisionism in dire times of suppression and without their state, today, when we have one, the chances of such a thing happening are virtually non-existent. It is our duty to take care of our Republic, so that all its citizens equally feel it as their homeland.