Inauguration of the Presidential Center for Political Education 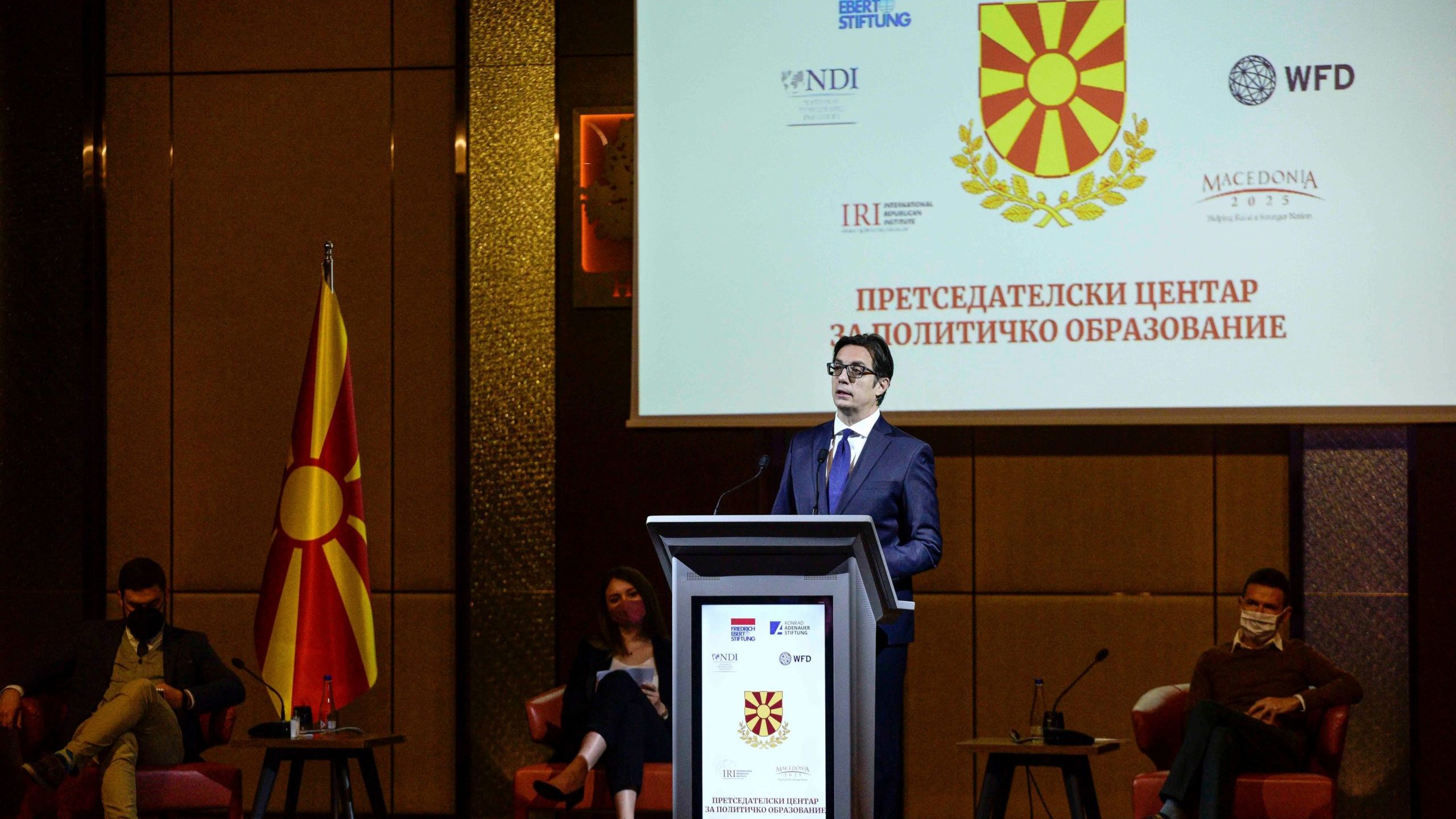 An inaugural event was held today at the Hilton Hotel in Skopje for the Presidential Center for Political Education, one of the key projects in the election program of President Stevo Pendarovski, which is implemented in support of the efforts to strengthen democratic political values, promotion and protection of human rights and freedoms, political pluralism, mutual tolerance, unity and solidarity.

At the inaugural event for the Presidential Center for Political Education, a debate was held on: “The Future of Democracy – Young People in Politics and Society”, which was attended by young people from the civil sector.

Distinguished representatives of foundations and organizations, members of the Program Council of the Presidential Center for Political Education,

I have the special honor and great pleasure to address you at the inaugural event for the Presidential Center for Political Education, before the first debate titled “The Future of Democracy – Young People in Politics and Society”. This Center for political education is one of the initiatives that I announced before the beginning of my term, which I consider one of the key projects of my program. I am happy that we are finally starting its implementation after many delays and difficulties caused by the pandemic which, unfortunately, affects all our planned activities.

Macedonian society is characterized by high level of disagreement and divisions on several grounds. Legitimate political differences, as essential elements of political pluralism, instead of being the basis for open and constructive political dialogue, have unfortunately become a cause of deep impatience and an obstacle to cooperation between political entities in meeting even our key state priorities. In the past three decades of independence we have gone through numerous political crises. In the beginning, the reason was the lack of basic political experience and the need to learn the way democracy works.

But, in the past decade, after 20 years of democratic experience, we experienced such a strong polarization that brought the country to the brink of civil conflict. The partisanship of institutions, the privatization of public interest, discrimination instead of accepting diversity, especially in those years, were our reality that negatively affected the development of the country and destroyed the prospects for a decent life for our citizens. Even today, unfortunately, a large number of studies show strong tendencies towards authoritarian political views among a significant part of the young generation. Such a setback in the democratic development is an expected consequence of the permanent crisis of political institutions and the low level of citizens’ trust in them.

Living in a democratic political order is a privilege that is still inaccessible to billions of people around the world. But democracy cannot survive if we do not invest in building democratic awareness, educating about democratic procedures and values, and civic tolerance and reconciliation. It has long been known that the most profitable long-term investment in a society is investing in education. In order to have a stable democracy, in order to have future generations of democrats, we must invest in an education based on democratic values. It was this need that prompted me to start such an initiative, for which I sincerely hope that in the next period will receive wider social support.

On this occasion, I would like to sincerely thank all the foundations and organizations that have recognized the idea and vision of the Presidential Center for Political Education and have been involved in its work as part of the Program Council. These are the Friedrich Ebert Foundation – Skopje, the Westminster Foundation for Democracy, branch office in the Republic of North Macedonia, the Konrad Adenauer Foundation, branch in Skopje, the National Democratic Institute for International Affairs (NDI), office in North Macedonia, the International Republican Institute (IRI), branch office – Skopje and the MK2025 Foundation.

Let me express my satisfaction with the experienced and dedicated partners with whose active role we will be able to achieve the planned program and implement the set goals. Still, in the work and activities of the Presidential Center can participate all associations and foundations from the country and abroad, which have the basic goal to promote a culture of dialogue and respect for multicultural reality and therefore I would like to invite all those who advocate for these values to join us.

In the following period, educational events are planned, debates on important social issues, scientific conferences, expert discussions, as well as a school of politics with eminent lecturers and coaches from the country and abroad. I believe that the work of the Center will contribute to the promotion of culture of dialogue and will influence the reform of education through comprehensive inclusion of political education in our formal and informal education system. Guided by the vision of strengthening democracy, promoting and protecting human rights and freedoms, political pluralism, mutual tolerance and solidarity, I am convinced that together we will achieve the goal.

With such a thought, I wish a constructive and interesting debate and successful work of the Presidential Center for Political Education in the coming years.