President Pendarovski addresses the celebration of October 11, the Day of the People’s Uprising in Prilep 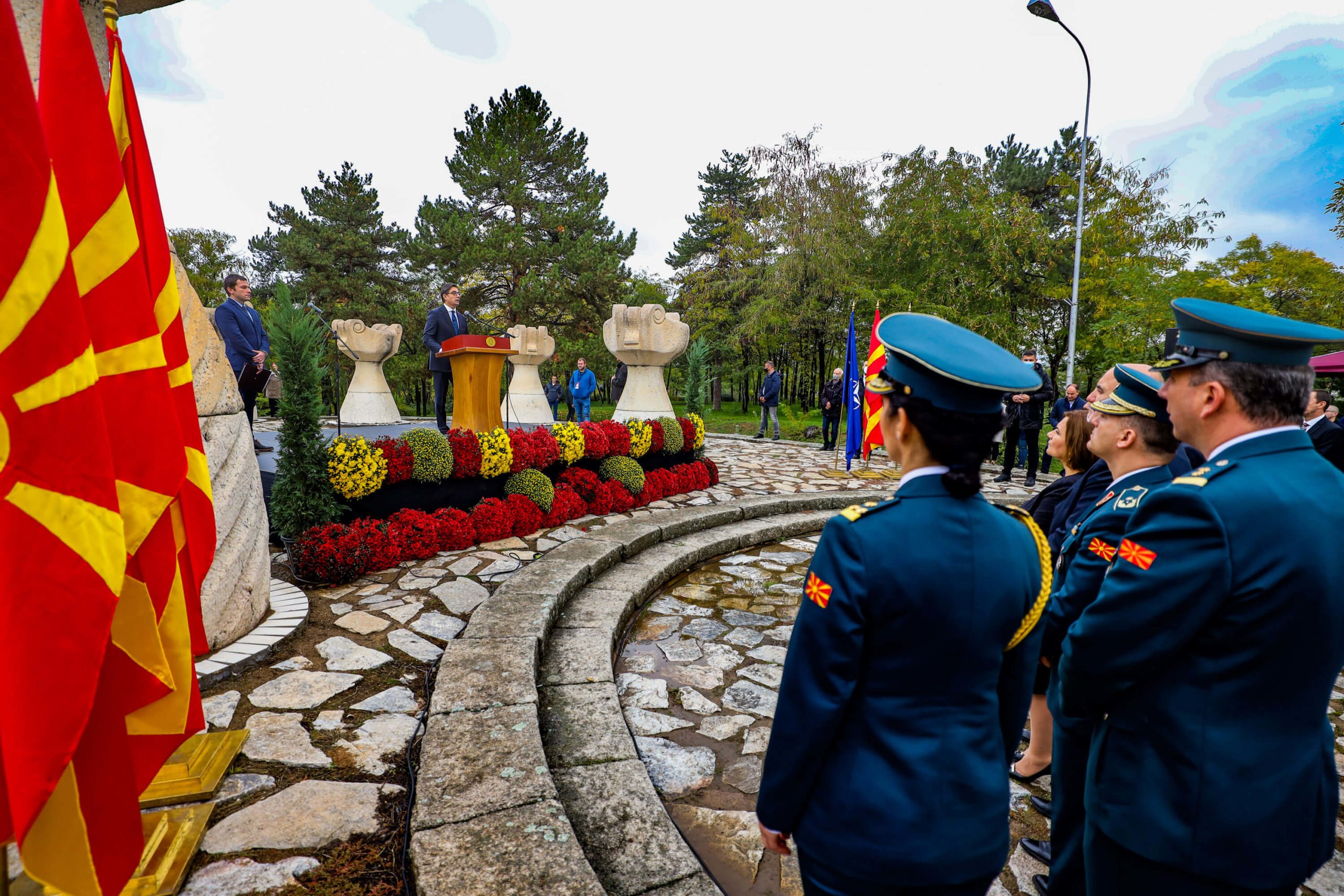 Today, as we celebrate the Day of the People’s Uprising throughout the country, we pay tribute to the brave men and women who sacrificed themselves for our freedom and statehood. A while ago, here in Prilep, we bowed before 462 names of fallen fighters. Here, we stand among the eight urns on the Mound of the Invincible, the tallest and most beautiful of which symbolizes the eternal flame of freedom.

It is no coincidence that people have always equated freedom with light. Over the centuries, the idea of ​​freedom has guided the path of the righteous who wanted to think about their present and future. The uprising began at the darkest hour in our history. Decades of national oppression, violent assimilation and propaganda culminated in the fascist occupation of April 1941. As an ideology of evil that divides nations into superior and unworthy, fascism gave the stronger the right to brutally rule the weaker.

Unable to see the terror against the people anymore, on 11 October 1941, the fighters of the Prilep partisan detachment “Goce Delchev” marked the beginning of the people’s uprising, as the last stage of the historical continuity of the struggle for a free Macedonian state. Continuity, because they continued to walk on the path of the Ilinden people. None of the partisan detachments was named after Marx, Engels or Stalin. Instead, they bore the names of the Macedonian revolutionaries Dame Gruev and Pere Toshev, Sandanski and Vlahov, Pitu Guli and Dobri Daskalov.

The following fact testifies to the connection with the Ilinden heritage: when we talk about the first fighters today, we think of the partisans who were the first to join the fight. But, when the partisans talk about the first fighters, they, above all, think of the Ilinden people. This unequivocally stems from the words of the key figure of the national liberation struggle, Kuzman Josifovski – Pitu.

Kuzman Josifovski constantly insisted on two things. First, to overcome the divisions caused by foreign propaganda which erode the national fabric. And, second, to create a single national liberation front in which every honest and freedom-loving person would become member, regardless of ethnic, religious, social and political affiliation.

Indisputable historical fact is that the uprising had in its ranks almost all the ideological currents of the Macedonian liberation movement. The anti-fascists, democrats and communists also joined that single front. The old Ilinden people, the Spanish fighters and the advanced students joined the partisan detachments as well. Among them were Macedonians, Albanians, Turks, Vlachs, Roma, Serbs, Bosniaks, Jews, Christians, Muslims and atheists. The fact that the partisans in the free territories did not install a communist regime, but created new organs of popular power as sprouts of the future free Macedonian state, speaks of the supra-ideological character of the National Liberation War. Those bodies also elected the delegates for AVNOJ and ASNOM. Those bodies also elected Metodija Andonov Cento, who, although not a member of the Communist Party, became the first president of the presidium of ASNOM.

It is equally important that the national liberation struggle was anti-fascist. With the Atlantic Charter of 14 August 1941, the United States and Great Britain pledged that nations that would engage in the anti-fascist struggle would be able to exercise their right to self-determination after the war. The Macedonian people did not wait for the outcome of the war to be determined and did not for a moment calculate between the two sides of the world conflict, but from the very beginning joined the anti-Hitler coalition. And it did so during the most difficult period of the war, when almost all of Europe was conquered by fascism and Nazism, which then seemed invincible.

With the beginning of the uprising, the terror against the population only intensified. Mass arrests, deportations and liquidations became more frequent. But, instead of being discouraged, the repression doubled the will of the people to pursue the light of freedom even more persistently.

At the end of that epic, our contribution to the victory over the global anti-fascist coalition was not negligible. We had one of the most vital partisan movements in Europe, which in four years gave about 25,000 casualties and managed to mobilize close to a hundred thousand troops. At one time during the war, on the territory of today’s Republic of North Macedonia alone, over 60,000 occupying soldiers and police officers were engaged in the face of the popular uprising, thus easing the burden on the allies on the other fronts in Europe.

Although today it is difficult to answer the great historical dilemmas that were present many years ago, we can be sure that if we were not part of the anti-fascist coalition, we would not have had our own country today. All the documents and manifestos from the National Liberation War, the wide international support and recognition for our struggle, unequivocally confirm that only as part of the anti-fascist coalition we could reach our own and free state. This is exactly what we achieved on 2 August 1944, at the first ASNOM session where the foundation of the free and sovereign republic was laid, which voluntarily joined the new Yugoslav federation.

This year, when we mark 80 years since the beginning of the people’s uprising, we also celebrate 30 years of independence. Like the partisans eight decades ago, the citizens, in 1991, recognized the unique historical opportunity and took responsibility for their future. Despite all ethnic, religious, political and ideological differences, we united around the idea of ​​an independent and sovereign state.

Immediately after the referendum, we faced major challenges of political, economic and interethnic nature. Due to external pressures and blockades of the integration processes, we lost precious time. But also, in certain periods, we pushed different priorities that took us far away from our strategic commitments: integration into the Euro-Atlantic structures.

There were attempts to relativize and marginalize the meaning of the National Liberation War and to look for some ancient roots of the state. And, all that time, the foundations of the free Macedonian state were literally in front of our eyes. Scattered throughout the country, over 1,100 memorials in honor of the national liberation struggle, in almost every settlement. These monuments, ossuaries, busts and slabs were erected by contemporaries and comrades of fallen heroes. As authentic testimonies of that glorious anti-fascist generation, these monuments are the strongest evidence against any kind and attempt of historical revisionism.

All these monuments send the same message: “Remember and do not forget what we fought for, because we paid your freedom with our lives”. The foundations of this country are Ilinden and anti-fascist and the moment when we would forget that, we would work on demolishing the only place in the world that we can call our home.

Although defeated, fascism, unfortunately, to this day, has not been completely eradicated. This horrible ideology that hates the different, despises the vulnerable, and is indifferent to those who suffer, always reappears in times of deep crisis. Xenophobia, racism and other types of neo-fascism are the eternal enemy of the innate dignity of man and the freedom of nations. At the same time, many of the old propaganda are present today, and, in a new format, are penetrating the Macedonian traditional and digital space. Although they come to us in new ways and in new forms, fascism and propaganda have the same goal – to sow discord and hatred among people. To resist them, we must learn to recognize and reject them.

In 1945, one of the first books in free Macedonia was published. It was the “Collection of Macedonian Folk Songs”, compiled and edited by Blaze Koneski. In this first collection, Koneski included several folk liberation songs. The first among them is the unofficial partisan anthem – “A bre Makedonche!”

This song that encouraged our heroes, with which they fought and died, should remind us that every generation, including the present one, must be ready to face and win the battles of its generation.

The task before us is to preserve freedom and democratic values, and to contribute to coexistence with commitment and responsibility. The Republic of North Macedonia must continue to make efforts to be part of the progressive world, while taking into account the dignity of both the citizens and the state. Through civil and national reconciliation, through the rule of law and raising the quality of life, let us restore the hope of young people that they can be realized here, in their homeland. Let us aim at a just and free society of equals, as dreamed by our glorious heroes in whose honor we are all gathered here today.

Many happy returns to the Day of the People’s Uprising!