President Pendarovski at the National Forum of Civil Society Organizations: The NGO sector should closely monitor and criticize the work of politicians Stressing that he is honored to be among the longtime civil activists who are guided by the vision of a free, just and inclusive society based on democratic development, equality, rule of law and coexistence, President Pendarovski in his opening speech addressed three topics: depolarization, open society and youth.

In that regard, President Pendarovski pointed out that for a long time the Macedonian society has been highly polarized, on almost every basis – interethnic, intra-ethnic, political, ideological and economic.

“More and more often we focus on what separates us, and at the same time we neglect what connects us and what holds us together. The political debate has been reduced to the degradation of the political opponent. Even in employment, we hear more and more often that preference is given to the candidates’ party affiliation or ethnicity, rather than their character, education and skills. This further accelerates the outflow of young, highly qualified people”, President Pendarovski stressed.

If we want to depolarize the Macedonian society, President Pendarovski added, we need to focus on several key issues, namely the rule of law, greater political responsibility and depoliticization of the society and de-ethnicization of politics.

Referring to the topic of open society, President Pendarovski stressed that a society in which hatred towards any community, towards any individual, is tolerated, loses its moral credibility.

“An open, free and just society cannot be built on intolerance or hatred of others. It must not be reduced to empty and politically correct rhetoric, but a society in which people will be sincerely respected”, President Pendarovski said, adding that depolarization and creation of a free society are necessary if we are to keep young people.

“State institutions must find a way not only to listen carefully to young people, but also to involve young people in policy-making and decision-making. It should be done through an open dialogue about what kind of society we want to build not for us, but for our grandchildren”, President Pendarovski concluded.

In the focus of the questions discussed yesterday at the event organized by the civil society organizations was the topic of impunity for high corruption, vetting of judges and cleansing of the judiciary, for which President Pendarovski said that it is necessary for every institution to work transparently. Speaking on this topic, as he said, our country has solid legislation, but that the implementation of laws is selective.

“We still have a culture of impunity for senior officials and for that we should not blame only the judiciary or judges. We should not take the focus away from us, the politicians”, President Pendarovski said.

Among the issues discussed was the large number of public administration employees, which is a burden on the state budget. In this context, President Pendarovski said he was skeptical that the number of about 140,000 employees in the administration would be reduced.
Regarding the long-awaited start of negotiations with the European Union, civil society organizations demanded an answer from President Pendarovski regarding the composition of the teams and the political consensus on this issue.

“We must create joint negotiation teams with the non-governmental sector as well. We will need over a hundred subgroups for negotiations and if we want to start the negotiations, we will have to gather all our minds in the country. CSOs have long been treated as enemies of the state, not realizing that their experience and knowledge can be useful to all of us in the process of negotiations with the EU”, President Pendarovski said.

Speaking about the situation of Roma, people with disabilities, gender issues, President Pendarovski pointed out that every individual, every institution can contribute by its own example.

Addressing the problem of regulation of Internet portals, organizations working in the field of media and media freedoms asked President Pendarovski about possible modalities for self-regulation of the media.

“Do not wait. If you are not self-regulating, someone else will regulate you and you will not have the right to free expression. Do not let the state regulate you”, President Pendarovski said.

Regarding the importance of civil society organizations and their role in the society, President Pendarovski said he would like to see more activism on their part. Because, as he added, “I have a feeling that in the last few years the intensity of the work of the non-governmental sector seems to be diminishing. I expect you to criticize our work more and more often”.

Every year, at the national forum, civil society organizations meet with representatives of state institutions and discuss previous experiences and opportunities for cooperation on issues of mutual interest. President Stevo Pendarovski promoted Colonel Simeon Trajkovski and Colonel Besnik Emini to the rank of brigadier general by decree. The ranks of the two army officers were presented to them today by President... Message from President Pendarovski on the occasion of November 26, International Day of French Language Teachers

President Stevo Pendarovski sent a message on the occasion of November 26, the International Day of French Language Teachers. Please find below the integral text of the message. To all professors, teachers, researchers and all those who have chosen to study and spread... Address of the Wife of the President, Elizabeta Gjorgievska, at the public online forum “Preserving the Environment Means Preserving Our Physical and Mental Health”

The Wife of the President, Elizabeta Gjorgievska, addressed the public online forum “Preserving the Environment Means Preserving Our Physical and Mental Health”, organized by the Amygdala association, in cooperation with “We Are Love - Jemi Dashuri”. The integral text... 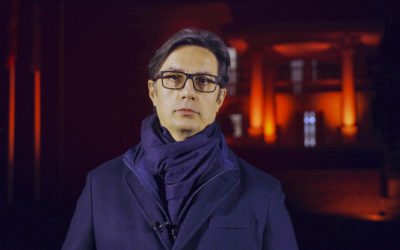 President Stevo Pendarovski joined the United Nations Global 16 Days of Activism against Gender-Based Violence campaign, which aims to raise awareness of the protection and prevention of violence against women and girls and gender-based violence. In the message,...