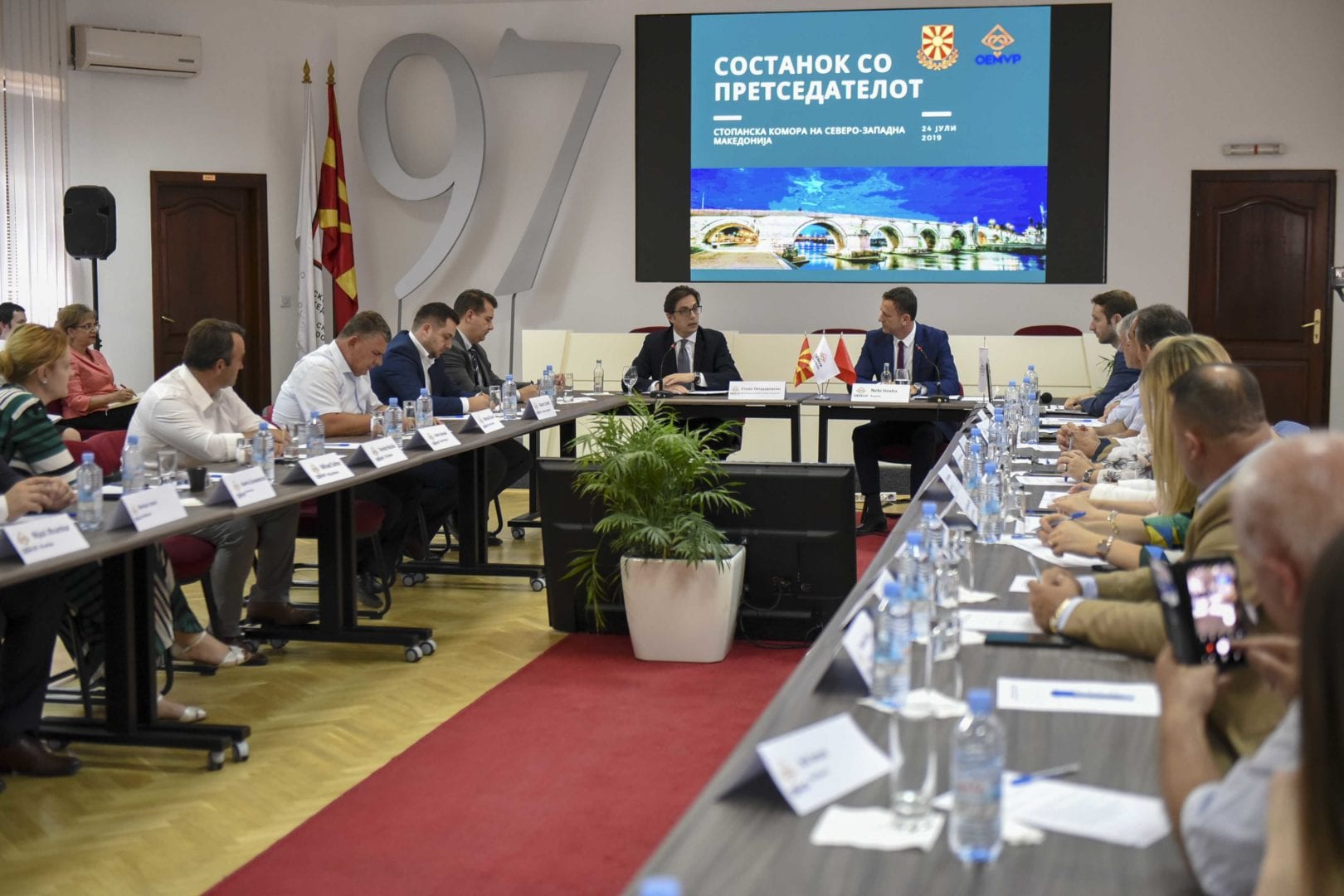 The President of the Republic of North Macedonia, Stevo Pendarovski, visited today the Economic Chamber of North-West Macedonia.

At the meeting with the businessmen from this Chamber, the President said that he does not make any divisions and that he will talk to everyone, because the goal is the same, to make life in the Republic of North Macedonia better and richer. Three priorities are important which require joint work. The first, the President said, is economic development, pointing out that there is no higher goal for a politician than making the life for the citizens better.

The President noted that the latest economic indicators are excellent, given the situation in which the state was just a few years ago. From a situation where there was an attack on the Parliament, to a country – a captured state, the last economic indicators of the first quarter of the year mark 4.1% growth. Of course, the President said, this is not enough, but he believes that we are on the right track, it depends on the politicians and businessmen what environment they will create – one in which the positive tendency will not be destroyed, which is in the hands of the key sectors of the state, including the economy.

“I can only appeal all the cases mentioned in the media about a racket of people from the business community to be cleared, because it is the safest way to destroy a country, if the clearing up of such cases gets wrapped up or put under the rug or settled partially”, President Pendarovski said.

The President pledged for as little politics in business as possible.

“The less politics in business, the better for business, the better for us all as a country. Wherever there is political interference in business, the economy suffers. Maybe one family is getting rich, as was the case many years ago, maybe a few people around them, maybe one political party which has the richest seat in Europe, but on average, the people is suffering. So, let us put all that aside and distance ourselves. Politicians make an ambiance for the business, but they do not participate in business in any way. Not through intermediaries, nor directly, nor indirectly. In general, regardless of who is in power, politicians should keep their hands out of business. If you want to deal with economy, you should leave politics, you will establish a company and do business”, the President said.

The President announced that he would put emphasis on economic diplomacy and asked for an agreement on the strategic issues on which the President, along with the government and the opposition, will work for their implementation.

“One of my roles is to communicate with all political parties and ethnicities, and to contribute as much as possible in reducing the gap where it should not exist,” the President said.

He also referred to the internal ambience in which the business is being done and, he said, he is not glad that there is a deep political polarization, pointing out that in the coming period he will continue to bring the opposing political positions closer.

“It is usual rhetoric of the political parties that we have been listening for years, especially strengthened in the past year, a year and a half, with a flammable rhetoric that irritates the citizens, regardless of which ethnicity they are and for which party they vote. I think that the party or intraparty rhetoric needs to be silenced, reduced, and we begin to talk about concrete things, from what we live and how to live better, the President said, stressing that he would not sign any decree of a law that is the opposite of the interests of the business community.