Visit to the Battalion for Military Medical Support 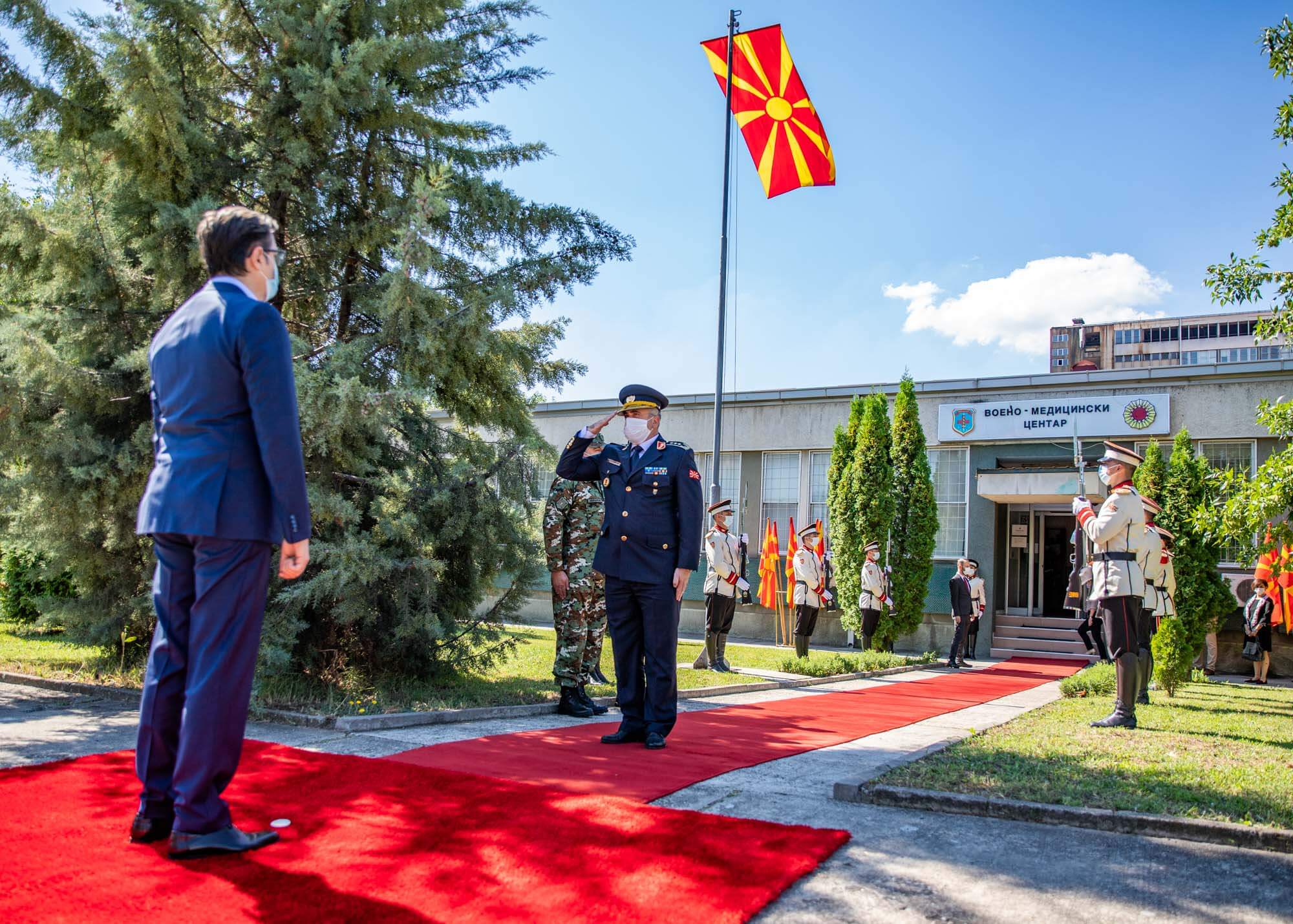 The President of the Republic of North Macedonia and Commander-in-Chief of the Armed Forces, Stevo Pendarovski, visited today the members of the Battalion for Military Medical Support, within the Military-Medical Center.

Following the proclamation of the COVID-19 virus pandemic, the staff of the Center became actively involved in supporting the staff of the public health institutions. At the request of the Ministry of Health in March, a team from the Military Medical Center set up the maneuvering hospital in front of the Infectious Diseases Clinic at the Mother Teresa Clinical Center to increase the capacity in the event of an influx of COVID-19 patients.

Given the increasing number of patients with the virus, since the middle of last month, military medical staff from the Center has been engaged in the Center for Public Health and the CGH “September 8”. The Commander of the Center, Colonel Irena Mineva, informed President Pendarovski that the team that is engaged for the needs of the CGH “September 8” is composed of experienced medical technicians who worked in the former Military Hospital. They were immediately deployed in the intensive care unit and in the shock room, where the most seriously ill patients with COVID-19 are housed.

During the visit to the Military Medical Center, President Pendarovski talked via video link with the senior first class sergeant Fatime Mustafovska, who is part of the team engaged in the CGH “September 8” and who worked on the surgical wards until the transformation of the Military Hospital. Emphasizing that the work with seriously ill patients is very specific, President Pendarovski told Mustafovska to be persistent.

“We can only believe that the crisis with the COVID-19 pandemic will end soon and that health professionals and all those involved in dealing with the consequences of the pandemic will be able to rest and be relieved of stress and daily risk”, President Pendarovski said in the conversation with Mustafovska.

The Commander of the Center, Colonel Irena Mineva, informed President Pendarovski about the work of the Center, its mission and future plans. In her presentation, Colonel Mineva pointed out that they are currently facing a shortage of general practitioners, who are responsible for the primary health care of the garrisons. The Military Medical Center, as Colonel Mineva pointed out, participates in the country’s entire health system, has an agreement with the Health Insurance Fund and through the “My Appointment” system provides health services to all citizens.

As a NATO member, as President Pendarovski said, it is necessary for Military Medical Center to be properly equipped and to function flawlessly as before.

The main mission of the Center is to preserve and improve the health and maintain the combat readiness of the members of the Macedonian Army at the required level. In addition to the basic mission, the unit is responsible for the Ground Maneuver Hospital with Role 2. In 2014, the GMH with Role 2 was evaluated according to the NATO concept for assessment of operational capabilities and received the highest marks by all criteria. Moreover, the staff of the Military Medical Center has so far participated in several peacekeeping operations, in ALTHEA in Sarajevo, Bosnia and Herzegovina, in the ISAF mission in Kabul and in Maimana, Islamic Republic of Afghanistan.